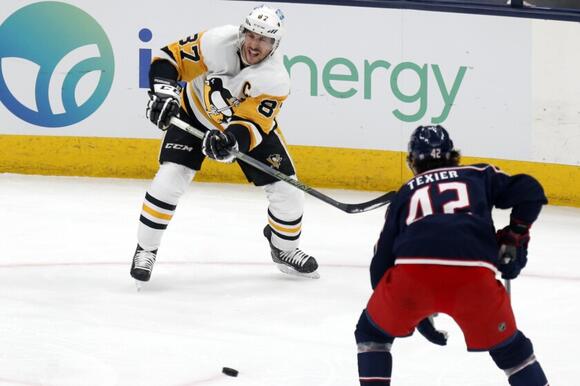 The message is more than six years old at this point. And no less vital.

From the day he took the Pittsburgh Penguins head coaching job in December 2015, Mike Sullivan has known he's in charge of a uniquely talented group, one that can sometimes fall in love with its own considerable ability.

The trick for Sullivan is to make sure Sidney Crosby, Evgeni Malkin and company can consistently decipher the difference between dazzling and dumb. It's why the energy with which he delivers his personal mantra — “play the right way” — has rarely waned.

It was there on Sunday in the aftermath of a 3-2 win over Winnipeg that boosted the Penguins to a remarkable 26-10-5 mark at the season's halfway point, good enough for second in the hotly contested Metropolitan Division.

Sure, Sullivan's team had recovered from a two-goal, third-period deficit to pull off its fifth straight win. Sure, All-Star goaltender Tristan Jarry turned aside 27 shots , including a handful of odd-man rushes in the first two periods as the Jets successfully lured the Penguins into a track meet. Sure, Crosby's deft flick of the wrist in the shootout pushed Pittsburgh's record to 16-2-0 in its last 18 games.

Still, a message needed to be sent. Too often of late the old habits — the ones Sullivan has been trying to rid his team of since the day he took the job — have crept in. The risky pass. The lackadaisical backchecking. The temptation to provide the spectacular play instead of the simple one.

So while Sullivan is pleased with the way his team has competed during an eventful first half in which Crosby missed a month, Malkin missed three and COVID-19 made its way through a considerable portion of the dressing room, he made a point to reiterate the process is sometimes more important than the result.

Asked if the dip in attention to detail of late — even among all the wins — is the mere byproduct of a heavy workload and the malaise that can set in during the middle of a six-month grind, Sullivan politely bristled.

“We're not looking for excuses,” he said. “We're trying to achieve excellence every day. Our expectation is high in that room. And we all have a responsibility to live up to that standard of what it means to be a Pittsburgh Penguin.”

A standard that has helped the Penguins reach the playoffs for 15 straight seasons, the longest active streak in major North American professional sports. Barring a collapse, a 16th trip to the playoffs awaits in April, and Sullivan knows what happens this spring remains the ultimate arbiter. It's why he's pressing even now, with his team among the hottest in the NHL.

“No one is going to rationalize sloppy play for any particular reason, fatigue or otherwise,” he said. “It's our challenge to find ways to manage our game through it.”

It wasn't an issue early in the season. Minus two of the game's most dynamic players, the Penguins hung around behind Jarry's steadiness, All-Star forward Jake Guentzel's sublime hockey IQ, and the unexpected emergence of forward Evan Rodrigues.

Encouraged to shoot more early in the year while filling in on the top lines, the 28-year-old Rodrigues has morphed from role player to legitimate scoring threat. His 15 goals are a career high, though he's also gone scoreless over his last eight games, seven of them coming after Malkin's long-awaited return to the lineup following offseason knee surgery.

The two are not directly related, but Malkin's arrival puts the Penguins nearly at full strength. It also gives Pittsburgh the wiggle room offensively it lacked early in the season. It's a blessing but also, in a way, a curse.

The Penguins are 6-1 since Malkin's familiar No. 71 hopped over the boards for the first time since last year's playoff loss to the New York Islanders, but they've also found themselves playing the kind of up-and-down hockey Sullivan loathes.

It wasn't just Sunday. Pittsburgh is allowing 33.8 shots per game with Malkin in the lineup, an uptick from the 29.3 it surrendered in the 34 games with Malkin watching from afar. There are far more factors involved than Malkin's presence and the trickle-down effect on the lineup. And yes, the Penguins are soaring at the moment.

Sullivan, however, is not focused so much on the present as he is on the future. The brand of hockey his team is playing is entertaining to be sure. It's also dangerous, and Sullivan knows it.

“I know our team is very capable, and when we’re at our best we do a real good job with the risk-reward factor,” he said. "I think most recently it’s been a little more volatile than we’d like.”

At least the Penguins are absorbing these lessons in victory. Two goals in less than 10 seconds on Sunday against the Jets tied the game and erased 40ish minutes of shaky decision-making.

“For this team, to come back in a game doesn’t take much,” defenseman Kris Letang said. “We have the talent and skill.”

That's never been the issue for a roster boasting a handful of future Hall of Famers. The key as the Penguins head into the second half will be finding the right balance between dazzling and diligence.

“It's hard to score your way to championships,” said Sullivan, who led Pittsburgh to the Stanley Cup in 2016 and 2017. “The chance-for-chance game is not a formula for consistent success and I think our players know that."

And if they forget, Sullivan is there with a reminder. Every single day.