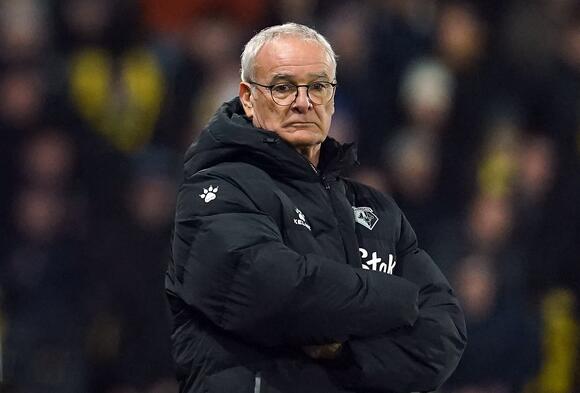 Claudio Ranieri has been sacked by Watford after less than four months in charge, the Premier League club has confirmed.

Watford’s 3-0 home loss to Norwich on Friday was the club’s 10th defeat in 13 Premier League games under Ranieri and it deepened their relegation concerns.

It dropped Watford into the bottom three for the first time this season after an alarming run of form which has seen the club pick up just seven points since Ranieri was appointed on 4 October.

With a two-week break until their next fixture, which is another crucial relegation six-pointer against bottom-side Burnley on 5 February, Watford have acted swiftly in what is their second managerial change of the season.

“The Hornets’ Board recognises Claudio as a man of great integrity and honour, who will always be respected here at Vicarage Road for his efforts in leading the team with dignity,” a statement read.

“However the board feels that, with nearly half of the Premier League campaign remaining, a change in the Head Coach position now will give a new appointment sufficient time to work with a talented squad to achieve the immediate goal of retaining Premier League status.”

Ranieri replaced former manager Xisco Munoz just seven games into the campaign , with the club winning three of those matches, but the former Chelsea, Leicester and Fulham boss lasted just 112 days in the job.

Roy Hodgson and Watford: A doomed marriage both sides would like to forget

It was a fond farewell, even as he returned to the scene of personal disappointment. Roy Hodgson said he was pleased his last game was at Anfield, “one of the temples of football,” and bowed out a local hero, the Croydon bus driver’s son who had travelled the globe, returned to his native south London and kept his boyhood club Crystal Palace up for four consecutive seasons. Arsenal gave him a guard of honour when they visited Palace. After 45 years in dugouts from Scandinavia and Switzerland to San Siro and Selhurst Park, he had earned the right to retire.Except...
PREMIER LEAGUE・3 HOURS AGO
The Independent

Everton fans invaded the pitch after their 3-2 win against Crystal Palace on Thursday night, which secured their Premier League survival. The Toffees have avoided the drop ahead of their final game, thanks to an incredible second-half comeback.Goals from Jean-Philippe Mateta and Jordan Ayew put Palace 2-0 up at the break, before Michael Keane, Richarlison and Dominic Calvert-Lewin fired back.The atmosphere at Goodison Park was electric at the final whistle, as Everton fans celebrated Premier League survival and one of the greatest comebacks in the competition's history.Click here to sign up for our newsletters. Read More Rangers star James Tavernier ‘devastated’ after Europa League final lossUS Soccer reaches equal pay agreement for men's and women's teamsJurgen Klopp likens strength of Liverpool squad to having ‘Ferraris in the garage’
PREMIER LEAGUE・3 HOURS AGO
The Independent

There were thousands of them on the pitch, celebrating Everton’s worst season for 24 years. Or more accurately, celebrating that it had not become their worst for seven decades. Relegation battles can do strange things and Everton, a fractured club and a failing team, have become united, a form of inspiration coming amid desperation, a fanbase who were often unhappy when they were higher up the league now jubilant, cavorting because safety was secured. A sense of peril, of imminent disaster, had channelled everything, brought everyone together. “People will say you are celebrating staying up but it means so much,”...
PREMIER LEAGUE・3 HOURS AGO
The Independent

What the papers sayPaul Pogba got as far as agreeing personal terms with Manchester City in negotiations over a transfer, but pulled the plug because the 29-year-old midfielder was concerned about a backlash from United fans, according to The Times.Meanwhile, The Sun reports that United are on the verge of securing Ajax defender Jurrien Timber. The 20-year-old defender has been linked with a transfer which would see him follow Erik ten Hag to Old Trafford and the paper writes that his agent has dropped a hint.On outgoings at the club, United’s Dean Henderson is close to moving to Newcastle, according...
PREMIER LEAGUE・3 HOURS AGO

Merseyside police have said they are looking into an incident at Everton on Thursday night in which Patrick Vieira appeared to aim a kick at a man taunting him. The Crystal Palace manager was involved in a confrontation with a fan on the pitch after his side’s 3-2 defeat, when Everton supporters invaded the playing area to celebrate their team avoiding relegation. The Football Association confirmed it was also looking into the incident involving Vieira.
PREMIER LEAGUE・8 MINUTES AGO
The Independent

Thomas Tuchel has hailed Chelsea’s likely third-place Premier League finish as a “miracle” given N’Golo Kante’s injury struggles.Marcos Alonso’s sweetly-struck volley snatched Chelsea a 1-1 draw with Leicester at Stamford Bridge that sealed third place in everything but mathematics.Chelsea boast a goal difference superiority of 18 on fourth-placed Tottenham, and manager Tuchel believes the job to seal third is effectively done and dusted.Kante has missed more than half the campaign with a string of different injuries, leaving Tuchel to lament the France World Cup winner’s absence across the campaign.The 31-year-old has a year left to run on his Chelsea deal,...
PREMIER LEAGUE・4 HOURS AGO
The Independent

Frank Lampard ranked escaping relegation as “possibly at the top” of his managerial career after Everton secured their top-flight status with one match to spare thanks to a 3-2 win over Crystal Palace.The Toffees will play in the top flight for a 69th consecutive campaign – only Arsenal currently have a longer run with their 97th campaign coming up – but it was not easy.Having struggled all season to be in the situation where they were two matches away from potentially losing their long stay in England’s highest division, Lampard’s players made even more hard work of it in their...
PREMIER LEAGUE・2 HOURS AGO
The Independent

On this day in 2002: Scotland suffer fourth-successive defeat under Berti Vogts

Scotland suffered their fourth-successive defeat under new boss Berti Vogts when they were beaten 2-0 by South Africa in Hong Kong on this day in 2002.The result made the German the first ever Scotland manager to lose his opening four matches in charge of the national side.The Reunification Cup defeat followed losses against France, Nigeria and South Korea since Vogts took over from Craig Brown in February.South Africa won thanks to strikes from Teboho Mokoena – following a disputed first-half free-kick – and a 90th-minute clincher on the counter attack from substitute George Komentaris.Nevertheless, Vogts declared himself happy with his...
WORLD・5 HOURS AGO

It’s all down to the final game of the season in most of Europe’s top leagues now, outside and beyond the confines of the Premier League.Around the continent is still a huge amount on the line, including the league title in Italy, a smattering of relegation places and some vital Champions League places to fight for.Here’s where we stand heading into the final weekend.Serie AJust one more game without defeat - that’s all AC Milan need to finally end their long wait for a title. It has been more than a decade since their last Scudetto, but win or draw...
PREMIER LEAGUE・3 HOURS AGO
The Independent

Accrington chairman Andy Holt has warned this week’s pitch invasions are a “disaster” for football which could lead to increased ticket prices to help cover additional security costs or even the return of physical barriers.The issue of crowd disorder and player protection is under the spotlight after the end of the regular English Football League season and the play-offs were marred by pitch invasions.A Nottingham Forest season-ticket holder, Robert Biggs, was jailed for 24 weeks after he deliberately charged at Sheffield United player Billy Sharp at the City Ground on Tuesday, headbutting him and knocking him to the ground.At Northampton...
PREMIER LEAGUE・2 HOURS AGO
The Independent

Hearts’ Scottish Cup embarrassment laid the foundations for their revival, according to sporting director Joe Savage.Robbie Neilson’s side face Rangers in Saturday’s final at Hampden Park aiming to end a 10-year wait for the trophy.It is a world away from last season when they crashed out to Highland League champions Brora Rangers 2-1 in one of the biggest shocks in the competition’s history.It sparked protests against owner Ann Budge but just 14 months later Hearts have finished third in the cinch Premiership and are guaranteed a return to Europe for the first time in six years.Savage has helped spearhead the...
SOCCER・2 HOURS AGO