This Is Us Sneak Peek: Jack Prepares for an Achingly Sad, Solo Journey 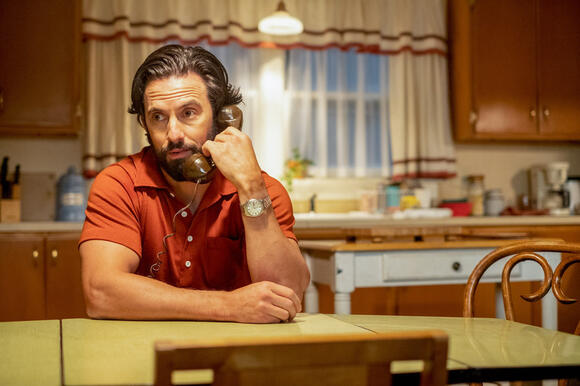 As you might’ve guessed from the final moments of last week’s This Is Us , Tuesday’s episode (NBC, 9/8c) is quite the emotional journey for Milo Ventimiglia’s Jack.

And as it turns out, it’s also a lengthy literal journey, as we learn in this exclusive sneak peek at the hour.

In the clip above, Milo Ventimiglia’s Jack prepares to drive to his recently deceased mother’s place to put her affairs in order ahead of the funeral. There’s a snow storm getting underway outside, and Jack is hastening to get on the road before the icy conditions make the drive treacherous.

Still, Mandy Moore’s Rebecca worries about her grieving husband making the trip alone. When she suggests that she and the kids come along, he gently shuts her down. “I’ve done the math,” he jokes. “Three 6-year-olds on a four-hour car ride? It ain’t worth it.”

She protests that “you’re our guy, Jack,” but he stands firm in his desire to travel alone. Plus, he points out, the kids barely knew his mom, Marilyn, whom they haven’t seen in years; for most of their lives, she’s been “just a voice on the other end of the telephone.”

Rebecca’s dismay is interrupted by the arrival of The Big Three, who respond to the death of their grandmother with age-appropriate nonchalance. Press PLAY on the video above to watch Sad Jack get ready to go, then hit the comments with your thoughts on the final season so far.

Yellowstone Spinoff 1883 to Continue Via Bass Reeves Story at Paramount+

Click here to read the full article. More 1883 is coming to Paramount+ — just not in the way you may have expected. The streamer announced Wednesday that its previously ordered Bass Reeves miniseries will in fact be an 1883 offshoot, officially titled 1883: The Bass Reeves Story. The limited-run project will star Golden Globe nominee David Oyelowo (Selma) as Reeves, a legendary lawman of the Wild West. “Known as the greatest frontier hero in American history, and also believed to be the inspiration for The Lone Ranger, Reeves worked in the post-Reconstruction era as a federal peace officer in the...
TV SERIES・3 DAYS AGO
TVLine

Click here to read the full article. ABC is the latest broadcast network to unveil it’s 2022 Fall TV schedule (following NBC), and there’s less comedy, more Bachelor in Paradise and a new primetime Jeopardy series. Also: Several series are moving to new nights (including one freshman hit). ABC is downsizing its comedy presence from two nights (Tuesday and Wednesday) to just one (Wednesday). As part of that consolidation, red-hot Abbott Elementary is moving from its old Tuesday perch into Wednesday’s 9 pm anchor position. The Conners, which previously had the Wednesday-9 spot, will now kick off the night at 8...
TV & VIDEOS・4 DAYS AGO
TVLine

Click here to read the full article. When The Resident returns for Season 6 at Fox (and it is officially a “when,” not an “if”), Conrad Hawkins will indeed get a new romantic partner — but Tuesday’s finale ultimately gave no indication as to who the lucky lady will be. During the emotional season ender, Conrad found himself frequently revisiting the memory of his and Nic’s first real date night after Gigi was born. During their night out, Conrad bumped into a young woman whose husband he’d diagnosed with cancer, who was now in the ICU after having an adverse reaction...
TV SERIES・3 DAYS AGO
Hello Magazine

One of the stars of This Is Us is on the move to a new network in advance of the show's series finale. Deadline reported in March that Chris Sullivan, who plays Toby on the NBC series, will headline a comedy pilot for ABC. His new show is set to be titled The Son In Law.
TV SERIES・24 DAYS AGO
Outsider.com

On Monday (April 25th), long-time “Wheel of Fortune” co-host Vanna White took to her Instagram account to announce her cat Stella passed away. The feline was 16 years old. “My sweet Stella has gone to kitty heaven,” Vanna White declared in the social media post, which features a snapshot of her kissing the cat. “I miss her so much and will cherish the special memories of the 16 years we had together.”
PETS・25 DAYS AGO
Hello Magazine

The Today Show stars, including Hoda Kotb, Savannah Guthrie, and Craig Melvin, are reeling from the death of a beloved fellow Today host, one whose hiring onto the show made history at NBC studios. The co-hosts took a moment out of Monday morning's show to honor the legacy of Jim...
CELEBRITIES・26 DAYS AGO
SheKnows

Playing bad has been very, very good for the actor. It took 42 years of working in soaps for John Aniston (Victor, Days of Our Lives) to get his first Daytime Emmy nomination back in 2017. And although he wound up losing to Steve Burton — who at the time was playing Dylan on The Young and the Restless — we’re thrilled to announce that this year, Aniston is 100 percent guaranteed to walk away a winner. Why? Because the National Academy of Television Arts and Sciences has announced that during the live ceremony held on June 24, Aniston will be the recipient of the Lifetime Achievement Award.
CELEBRITIES・25 DAYS AGO

Netflix has canceled another one of its major shows, with this one getting the ax after only two seasons. Variety reports that hit sci-fi drama Raising Dion has been dropped by the streamer, following its recent season debut. The news seems to have been revealed by series star Sammi Haney, who shared the news with fans on Instagram. "Sad to say that Raising Dion is CANCELED [sic] Thank you for all of the amazing support we got from all of our wonderful fans!" Haney wrote, in part. "Season 2 was a success, equal to Season 1, even if just looking at how many people watched all of it and wanted a season 3!"
TV SERIES・24 DAYS AGO
ComicBook

After weeks of silence, Chris Rock has finally addressed his now-infamous incident with Will Smith at March's 94th Annual Academy Awards. During another sold-out show at Baltimore's Lyric Performing Arts Center on Friday, Rock directly referenced the slap, but only spent a second on it before moving on with his set.
BALTIMORE, MD・26 DAYS AGO
People

Paulina Gretzky walked down the aisle in Vera Wang!. The bride shimmered during her wedding with pro golfer Dustin Johnson on Saturday at Tennessee's Blackberry Farm. Gretzky showed off the stunning look on Instagram Monday in a photo of the newlyweds kissing. "4/23/22♥," she simply captioned the post. For...
BEAUTY & FASHION・24 DAYS AGO
Hello Magazine

On Thursday evening, the Duchess of Cambridge had a show-stopping fashion moment at the premiere of Top Gun: Maverick in Leicester Square, London. Looking positively glorious alongside husband Prince William, the mother-of-three wore a glamorous Roland Mouret dress with a bardot neckline - a favourite of sister-in-law Meghan Markle. The dress was a black column style with a white band across the top that showed off her collarbones.
BEAUTY & FASHION・2 DAYS AGO

Last month it was revealed that Sharon Osbourne would be returning to television, partnered with Piers Morgan on a new U.K. series named The Talk. This comes nearly a year after Osbourne was suspended and eventually exited the U.S. talk show The Talk after expressing her support for Morgan in an intense discussion over race with co-host Sheryl Underwood. Now, in a new interview with the U.K.'s Sunday Times, Osbourne reveals how cancel culture impacted her as she eventually parted ways with her longtime daytime talk series amidst public backlash.
CELEBRITIES・26 DAYS AGO
TVLine

Click here to read the full article. Mary J. Blige‘s icon status was made official at the 2022 Billboard Music Awards. The Power Book II: Ghost star was honored with the BBMAs’ coveted Icon Award during Sunday’s ceremony on NBC. And who better to receive such a title? Blige boasts an incredible 10-for-10 record at the BBMAs, having won every trophy for which she has ever been nominated, including Female Artist of the Year in 2006. “The way the world is now, I think people think icons are born that way, that they become a legend overnight,” Blige began. “But that is definitely...
CELEBRITIES・5 DAYS AGO
Outsider.com

She’s definitely embracing the Hawaii lifestyle, and now “NCIS: Hawai’i” star Vanessa Lachey is showing off her everyday surrounding to her Instagram followers. “Hawai’i = Home,” Vanessa Lachey declares in her latest social media post. The “NCIS: Hawai’i” star also shares a snapshot of her sitting in a breathtaking area in Hawaii.
HAWAII STATE・25 DAYS AGO
hotnewhiphop.com

Gwyneth Paltrow is a doting mom to two teenage children, Apple and Moses, who she shares with ex-husband Chris Martin. The family are notoriously private, but over the weekend the award-winning actress gave a rare insight into their upcoming plans - and how they are changing things up this year for Mother's Day.
FAMILY RELATIONSHIPS・25 DAYS AGO
Popculture

Spring is always a big time for engagements and weddings, and two beloved internet personalities are the latest to update their relationship status. On April 18, Rachel "Seltzer" Quirico revealed she and longtime boyfriend Trevor "TorcH" Housten were tying the knot after 17 years together. Both of them are beloved figures in the esports world, with Seltzer notably starring in the Syfy reality show WCG Ultimate Gamer. She's also hosted numerous esports tournaments and events for TV/streaming outlets; she also made a recent appearance on G4 TV's Boosted.
RELATIONSHIP ADVICE・25 DAYS AGO
Popculture

90 Day Fiancé stars Anna-Marie Campisi and Mursel Mistanoglu have added a little boy to their family! The couple, who tied the knot on Season 7 of the TLC reality show, announced on Instagram this week that their son, Gokhan John, had been born via a surrogate on Monday, April 11 after the couple's initial struggle with fertility.
FAMILY RELATIONSHIPS・25 DAYS AGO