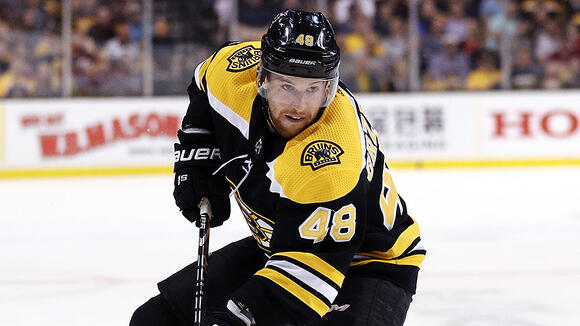 BOSTON (CBS) — The Bruins will be a little shorthanded along the blue line as they wrap up a seven-game homestand. Defenseman Matt Grzelcyk will be sidelined on Monday night when the B’s welcome the Anaheim Ducks to TD Garden.

Grzelcyk briefly left Saturday’s win over the Jets after being sent into the boards by Winnipeg’s Pierre-Luc Duboius in the first period. He did return to the game and finished with 13:35 of ice time, and was credited with an assist on David Pastrnak’s game-winning goal in the third period.

Head coach Bruce Cassidy was cautiously optimistic that Grzelcyk avoided a serious injury after Saturday’s game, but did say there could be lingering effects that pop up from the injury. That appears to be the case, as Grzlecyk missed Monday’s morning skate and is now considered day-to-day.

“We’ll list him as day-to-day for now until we hear differently,” Cassidy said Monday. “[He’s] definitely out tonight.”

With Grzelcyk not available, Uhro Vaakanainen was alongside Charlie McAvoy on Boston’s top defensive pairing on Monday morning. Mike Reilly was also back in the fold after missing time in COVID-19 protocols. and could make his return to the lineup Monday night. Reilly skated with Brandon Carlo on Boston’s second defensive pairing during morning skate.

For the season, Grzelcyk has 14 assists and a pair of goals over his 36 games. He’s averaged over 19 minutes of ice team and is a plus-five for the year, which ranks second among Bruins defensemen behind McAvoy’s plus-nine rating.

Boston won five of six to start its homestand, and the Bruins currently sit at 24-12-2 on the season.

Marcus Smart out, but Robert Williams returning to Celtics lineup for Game 4

BOSTON -- The Celtics got some good news and some bad news on the injury front for Game 4 of the Eastern Conference Finals. Robert Williams will return to the Boston lineup on Monday night, but Marcus Smart will miss the game with a right ankle sprain.Smart tried to test the ankle ahead of Monday's game, but Celtics head coach Ime Udoka described his starting point guard as "quite swollen" during his pre-game press conference. Losing Smart isn't the best news for the Celtics, as they look to even the series against the Miami Heat with a win on Monday. Smart...
BOSTON, MA・1 DAY AGO
CBS Boston

BOSTON -- All that matters is that the Celtics won Game 4, and now the Eastern Conference Finals is tied at 2-2.The Celtics won in blowout fashion, beating the Heat 102-82 to knot the series. But boy was Game 4 ugly for most of the evening.Boston won big despite not shooting particularly well, hitting less than 40 percent of its shots: 31-for-78. But Miami was much, much worse, hitting just 30 of its 90 attempts, and got off to one of the worst starts in NBA postseason history.The Celtics rode that -- and 31 points from Jayson Tatum -- to...
BOSTON, MA・1 DAY AGO
CBS Boston

BOSTON -- Jayson Tatum has taken another step toward NBA superstardom. The Celtics forward was named to the All-NBA First Team for the first time in his career on Tuesday night.Tatum's play in 2021-22 certainly warranted the honor, as he averaged career-highs with 26.9 points, 8.0 rebounds and 4.4 assists per game during the regular season. Those numbers could have been even better had it not been for a slow shooting start for Tatum, but he really turned it on in the second half of the season when Boston enjoyed most of its success.Over his last 41 regular season games,...
BOSTON, MA・12 HOURS AGO
CBS Boston

BOSTON -- We're once again playing the waiting game with a pair of Celtics players and their status for Wednesday night's Game 5 against the Miami Heat. Marcus Smart and Robert Williams are both listed as questionable for the playoff tilt.Smart is still dealing with a right ankle sprain that he suffered in Game 3, which caused him to sit out Monday night's Game 4 victory in Boston. Williams returned and played 19 minutes on Monday night, after missing Game 3 with left knee soreness.While Williams played Monday -- and played well -- he is still considered day to day...
BOSTON, MA・1 HOUR AGO

BOSTON -- If you've been able to follow along with every injury update during the Eastern Conference finals, then congratulations are in order. The series has had more twists and turns than an M. Night Shyamalan screenplay ... and they've only played three games. It's no surprise, then, that as the Boston Celtics prepare to host the Miami Heat for Game 4, the injury report for both teams looks like a beautiful, chaotic mess. As of Monday morning, the Celtics' injury report looks like this: Sam Hauser (shoulder) - OUT Marcus Smart (ankle) - QUESTIONABLE Jayson Tatum (nerve impingement) -...
BOSTON, MA・2 DAYS AGO
CBS Boston

BOSTON -- With five straight victories and wins in nine of their last 12 games, the Red Sox finally have something to feel good about. They decided on Sunday to spread those good vibes with the Boston Celtics.On their way out of Fenway Park following their walk-off win to complete a four-game sweep of the Mariners, the Celtics were decked out -- in head to toe, in some cases -- in Boston Celtics gear.Franchy Cordero, who hit the walk-off grand slam with two outs in the bottom of the 10th inning, was representing Marcus Smart, as was Trevor Story. Smart took notice of both players wearing his jersey and shared his appreciation on Twitter:Tanner Houck wore the full uniform, shorts and all, to represent Jayson Tatum, a jersey which was a popular choice among Red Sox players:The Celtics will host the Miami Heat in Game 4 in Boston on Monday night, looking to even the series at two games apiece. The Red Sox will be in Chicago, but they made sure to lend their support before heading out of town.
BOSTON, MA・1 DAY AGO
CBS Boston

BOSTON -- Around New England, there's been some consternation about the Patriots' plans on the offensive side of the coaching staff. With Josh McDaniels (and three other assistants) leaving, the void of experience in terms of offensive play-calling on the coaching staff is a bit jarring.Yet Bill Belichick doesn't seem to be even slightly concerned.The Patriots' head coach spoke to the media on Monday morning, ahead of the team's first on-field OTA session of the offseason. Unsurprisingly, the lack of a dedicated offensive play-caller was a persistent topic of conversation. Just as expectedly, Belichick made sure to minimize the perceived...
FOXBOROUGH, MA・1 DAY AGO
CBS Boston

BOSTON -- David Ortiz knows a thing or two about greatness. He has the World Series rings and, soon enough, a plaque in Cooperstown to back him up.When it comes to Celtics star Jayson Tatum, Ortiz sees greatness. Not just Celtics greatness, but NBA greatness.Tatum, 24, took his game to a new level during the regular season and has enjoyed some monster nights during Boston's current playoff run. He led the way with 31 points in Boston's bounce-back win in Game 4 on Monday night, evening the Eastern Conference Finals against the Miami Heat at two games apiece.It was the...
BOSTON, MA・22 HOURS AGO

Celtics see Game 5 as a must-win

BOSTON -- The Celtics bounced back from a tough playoff loss once again Monday night, bringing their record to a perfect 5-0 following a defeat this postseason. It's admirable, but it'd be nice if it didn't take a misfire to wake up the team.With the Eastern Conference Finals knotted up at two games apiece, the Celtics would like to never be in bounce-back mode again against the Miami Heat. They picked themselves up after an embarrassing Game 3 defeat to run away with Game 4 early on Monday night, but that just makes their struggles from Saturday night all the...
BOSTON, MA・23 HOURS AGO