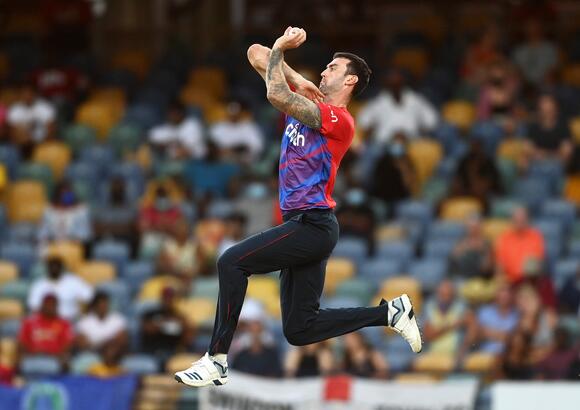 England left-armer Reece Topley revealed he cherishes being involved in the decisive moments of matches following a turbulent injury history that has leant some perspective to his outlook.

Topley has previously admitted he thought his career was over in his mid-20s due to multiple stress fractures in his back, but the 6ft 7in seamer has painstakingly worked to get back into England contention in recent months.

In his first T20 international appearance in six years on Sunday, Topley made early inroads into the West Indies attack by trapping Brandon King lbw second ball before running out Shai Hope with an inventive bit of fielding.

With England then under the cosh amid an onslaught of sixes from Romario Shepherd and Akeal Hosein, Topley conceded just eight runs in the penultimate over as the tourists claimed a series-levelling victory, by a margin of just one run.

“I’ve had it slightly different than other people that play international cricket, in terms of the journey that I’ve had, I think my perspective is quite unique,” said Topley, still only 27.

“Even when I’ve been injured so much, you’d almost bite someone’s hand off to play in a T20 and bowl four overs for 40-something. It’s almost like, at least I’m out there. So then those bad days, I know it won’t be the last bad day I have.

“It’s not like I haven’t got this competitive instinct, it’s just I’m very realistic about things now and very level-headed. That has boded well for me since coming back and playing, because those pressure scenarios, I just embrace them.

“I almost feel like it’s normal to be nervous and it’s exciting because it’s a game on the line for your country. Who wouldn’t be nervous? I think that’s the perspective that I’m pretty lucky to have stumbled upon.”

Topley, who was upgraded to England’s T20 World Cup squad from travelling reserve in the United Arab Emirates a couple of months ago, conceded just 18 from his four overs, his most economical outing for England in the format.

But he reflected with some pride on making early inroads into the Windies batting at Barbados’ Kensington Oval, where his parents were in attendance, after England had made 171 for eight.

After accounting for King, who made an unbeaten fifty in England’s nine-wicket defeat on Saturday, for a golden duck, Topley also rapped Hope on the pad. Had England sent the not out decision upstairs, the review would have gone in their favour but, with the ball still live, Topley reacted quickly to run Hope out.

“As a bowler my currency is wickets,” said Topley. “If you ask me I’d say that I can take wickets at any stage and in any format at the end of the day. It’s what I get up in the morning for – to try and get batsmen out essentially. It’s why I fell in love with cricket.

Even when I’ve been injured so much, you’d almost bite someone’s hand off to play in a T20 and bowl four overs for 40-something

“In my job in T20, bowling at the top and the end is what I do. You’ve just got to put yourself in the pressure scenarios. It came off well then there’s games where it doesn’t.

“You have to keep the hunger even in the games where it isn’t falling your way, it’s just the nature of the beast.”

Topley’s intervention at the back end of the Windies innings left the hosts needing 30 from the last six balls, but number 10 batter Hosein thumped two fours and three sixes as Saqib Mahmood’s over went for an eye-watering 28 as England prevailed by the narrowest of margins.

“I’ve been there before where you just get wrapped up in it,” added Topley. “It’s the pressure scenario, the whole match becomes a match within a match in those last few overs.

The five-match series, currently finely poised at 1-1, resumes on Wednesday.

Craig Overton claimed his 400th first-class wicket as Somerset rallied against Hampshire at Taunton.Overton claimed the scalps of Felix Organ, Ian Holland and James Vince as Hampshire closed on 144 for five in their LV= Insurance County Championship Division One clash.The England seamer ended the day with three for 21 from 18 overs, with his side leading by 67 runs at stumps.No play was possible before lunch because of a wet outfield, but Holland, with 49 from 111 balls, was the pick of the Hampshire batters after the action finally got under way.England hopeful Harry Brook shone again as Yorkshire...
SPORTS・6 HOURS AGO
The Independent

Fernandinho feels he has achieved everything he intended as he prepares to bid farewell to Manchester City.The veteran Brazilian midfielder will leave City after nine mostly successful years following Sunday’s final Premier League game of the season against Aston Villa.The 37-year-old has won four Premier League titles, six League Cups and one FA Cup since his £30million arrival from Shakhtar Donetsk in the summer of 2013.Champions League success has eluded him, with last year’s runner-up finish the closest he has come to European glory with City, but he does have the chance to sign off with one more Premier League...
PREMIER LEAGUE・5 HOURS AGO
The Independent

Rory McIlroy failed to take advantage of a favourable draw before hailing Tiger Woods as the “ultimate pro” for fighting back to make the halfway cut at the PGA Championship.McIlroy could only add a second round of 71 to his opening 65 at Southern Hills, despite being part of the early-late wave of players who enjoyed by far the best of the conditions over the first two days in Tulsa.That left the four-time major winner five shots off the pace set by Will Zalatoris, who compiled a flawless 65 in the group ahead of McIlroy to enjoy a one-shot lead...
TULSA, OK・2 HOURS AGO
The Independent

No hangover next season if Arsenal miss out on Champions League, insists Mikel Arteta

Mikel Arteta is confident Arsenal will not suffer a hangover next season if they miss out on Champions League qualification this weekend.The Gunners host Everton on Sunday knowing even an emphatic victory will not be enough to clinch fourth spot in the Premier League if rivals Tottenham claim the point they require away to already-relegated Norwich.Arsenal appeared in the driving seat following key wins over Chelsea and Manchester United last month but back-to-back defeats to Spurs and Newcastle mean they look set to settle for fifth in the table.It would still represent progress following consecutive eighth-place finishes, but a warning...
PREMIER LEAGUE・5 HOURS AGO

Rangers meet Hearts in the Scottish Cup final on Saturday.Here, the PA news agency looks at the main talking points ahead of the Hampden showpiece.Rangers’ Euro hangoverMuch will depend on how Rangers react, both physically and mentally, to their midweek exertions in the Europa League final against Eintracht Frankfurt. Playing 120 minutes in searing Seville heat is sure to have taken a toll on the limbs of Giovanni van Bronckhorst’s players. In addition, the sense of anguish at putting so much into the biggest game of their lives and coming away empty-handed is unlikely to have fully dissipated by kick-off....
SOCCER・8 HOURS AGO
The Independent

Ralf Rangnick may not have brought much to Manchester United but he has at least lent a disarming honesty. Supporters who did not appreciate results and performances could at least appreciate a willingness to tell it like it is, though a number of his players probably didn’t. If some of his predecessors at Old Trafford – a certain supposedly special Portuguese individual, in particular – played the blame game, Rangnick believes in looking in the mirror first.His verdict on his time at Old Trafford was not an attempt to duck responsibility. “We could all have done better, including myself. We...
PREMIER LEAGUE・5 HOURS AGO