The market isn't taking any prisoners right now, but there are especially interesting things happening in the more speculative electric vehicle (EV) sector. It's not just start-up companies with little to no revenue getting hit, with the stock of market leader Tesla (NASDAQ: TSLA) down more than 25% from January highs. This morning, shares of Tesla, Rivian Automotive (NASDAQ: RIVN) , and zero-emission semitruck maker Nikola (NASDAQ: NKLA) are all experiencing much steeper drops than the technology-filled Nasdaq Composite index . As of 11:12 a.m. ET, Tesla stock was down 6.6%, having recovered from a previous 10% drop. Rivian shares were near the day's low of 10.1%, and Nikola was down 7%.

Much of Tesla's high valuation has come based on expectations from future earnings. With prospects of inflation and rising interest rates, investors are now less willing to pay higher prices for many growth stocks like Tesla. That mentality is magnified even more with names like Rivian and Nikola for which commercial sales have just begun and operational risks are even higher. 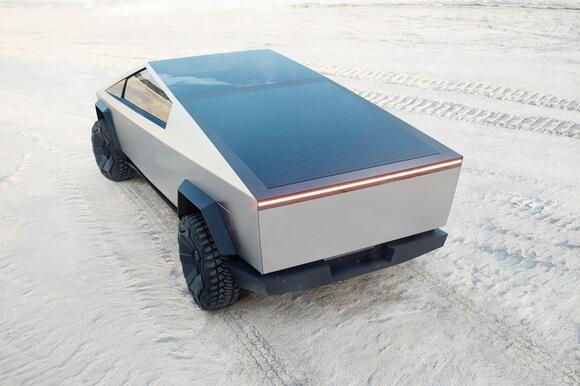 Since Tesla grew its vehicle sales more than 87% year over year in 2021, investors are looking forward to the company's opening its two new manufacturing plants in Texas and Germany, respectively. But there has also been a recent sign that its Cybertruck production is being delayed, with production estimates being removed from Tesla's website. With new electric pickup truck offerings now coming to market from Rivian, as well as established automotive makers like Ford and General Motors , investors may begin to doubt that Tesla shares will continue to lead the Nasdaq higher in 2022.

The question for investors now is how much of a premium the market will settle on for a name like Tesla. When the company reports its full-year 2021 results this Wednesday, Jan. 26, investors will likely hear that revenue for last year exceeded $50 billion. Net income through the first nine months of 2021 was nearly $3.2 billion. But even with the recent drop in the share price, Tesla still has a market cap of almost $900 billion.

The ongoing tech sell-off is hitting start-ups like Rivian and Nikola even harder than the more established players like Tesla. Rivian stock, which was once valued at over $100 billion even with virtually no revenue, has come down more than 50% and is now trading well below its $78-per-share IPO price . But no growth stocks are being spared from the ongoing correction, and more speculative investments are leading the way lower. For investors who believe the EV market will evolve as many expect, those with enough of a risk tolerance could look back on this downturn as one that presents good long-term opportunities.

These mind-bogglingly cheap stocks are valued at 3 to 5 times Wall Street's forecast earnings.
STOCKS・1 DAY AGO

A multi-decade infrastructure super-cycle is underway that should present significant tailwinds.
STOCKS・2 DAYS AGO
inputmag.com

Time is a great teacher.
STOCKS・7 HOURS AGO
The Motley Fool

Snap's revised lowered guidance and warning took every digital advertising company down with it.
STOCKS・1 HOUR AGO
The Motley Fool

Lingering concerns about a potential big-ticket buy and an analyst price-target cut combined for a bad day on the market for The House of Mouse.
STOCKS・18 HOURS AGO
The Motley Fool

Crypto may be in a slump, but that doesn't mean you can't invest.
MARKETS・2 DAYS AGO