Apple (NASDAQ: AAPL) is set to release its fiscal 2022 first-quarter results after the market closes on Thursday, Jan. 27, and investors would be hoping for a solid performance from the company to arrest the stock's slide.

Shares of Apple have been going downhill in 2022 due to the sell-off in tech stocks , which has been triggered by the Federal Reserve's hawkish stance that could result in as many as four interest rate hikes in 2022 to keep inflation under control. 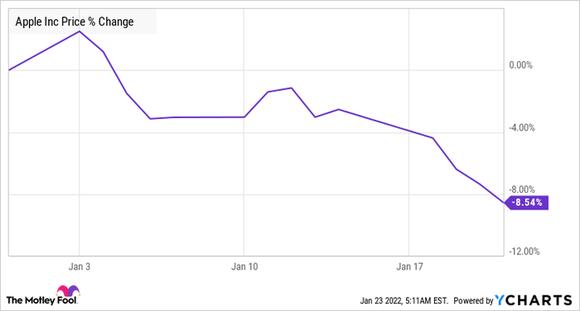 Apple CEO Tim Cook had pointed out on the October 2021 earnings conference call that the company lost an estimated $6 billion in revenue in the fourth quarter of fiscal 2021, driven by "industrywide silicon shortages and COVID-related manufacturing disruptions." Cook had added that "the impact from supply constraints will be larger during the December quarter."

Apple had declined to issue revenue guidance for Q1 because of the supply chain problems, so it remains to be seen how its results stack up against Wall Street's expectations. Analysts expect Apple's revenue to increase just 6% year over year in the fiscal first quarter to $118.4 billion. The company had recorded a 21% year-over-year increase in revenue in the same quarter last year to $111.4 billion and finished fiscal 2021 with a 33% spike in full-year revenue to $365.8 billion.

Higher rates encourage investors to shift their money from high-risk companies to relatively safer investments such as bonds. Additionally, higher interest rates increase borrowing costs that could hurt the bottom line, which is something investors don't want to see in richly valued stocks.

Throw in the fact that Apple was suffering from supply chain problems during the holiday season, and the odds seem to be stacked against the iPhone maker when it releases its results. Does this mean that investors should start selling Apple stock before its earnings report? Or should they take advantage of the dip and buy more? Let's find out. 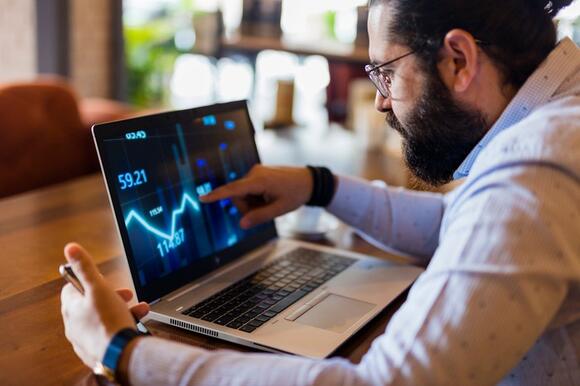 The company's earnings, on the other hand, are expected to increase only 12% year over year during the quarter. For comparison, Apple had clocked a 71% increase in adjusted earnings in fiscal 2021 to $5.61 per share.

What's more worrying is that Apple's growth could slow down meaningfully this fiscal year. Analysts are expecting just 4.5% revenue growth in fiscal 2022 to $382.3 billion, while earnings are expected to increase just 2.3% to $5.74 per share. The potential interest rate hikes could add to the gloom and keep Apple from repeating its stellar stock market performance of the past three years. 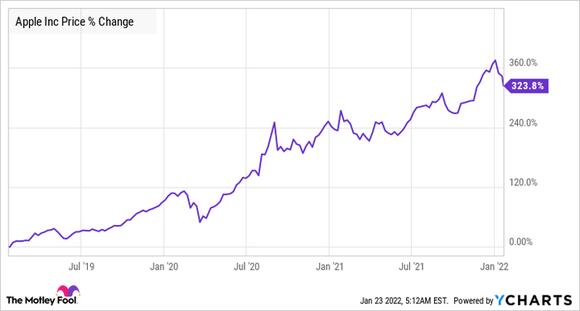 So, there are quite a few reasons why investors may want to sell Apple stock before its earnings report. However, savvy investors should focus on the bigger picture as the company could spring a surprise, both in the short and in the long run.

That's because Apple has a huge installed base of users in an upgrade window that are waiting to get their hands on a 5G iPhone. Wedbush Securities analyst Daniel Ives estimates that around 230 million iPhone users haven't upgraded their phones in the past three and a half years, which means that Apple's sales can start picking up once its supply chain problems are sorted.

The good part is that Wall Street sees an improvement in Apple's supply chain. Wells Fargo analysts have raised their price target on Apple stock to $205, which points toward a 26% potential upside from Friday's close. Analyst Aaron Rakers says that a combination of supply chain improvements and robust demand for Apple's products could help it sustain its growth momentum.

CFRA Research also maintains a similar view, stating that supply constraints are likely to ease in the first half of the year and Apple is on track to gain market share in markets such as China. Not surprisingly, analysts believe that the tech giant could outperform expectations. Katy Huberty of Morgan Stanley estimates that Apple sold 83 million iPhones last quarter and outperformed expectations of 80 million units.

Additionally, Apple is expected to sell 55 million iPhones in the current quarter as per Huberty, which would land ahead of the market's expectations. So, Apple could exceed expectations when it releases its earnings report, and that could help the stock regain its mojo. More importantly, the tech stock could sustain its momentum in the future as well since it is sitting on several mouthwatering catalysts .

In all, a strong report and a robust outlook could send the stock soaring and make it more expensive. That's why investors can consider buying Apple's dip heading into its quarterly report as it is trading at 29 times trailing earnings now, a small discount to the 31.6 times earnings it was trading at last year.

They just revealed what they believe are the ten best stocks for investors to buy right now... and Apple wasn't one of them! That's right -- they think these 10 stocks are even better buys.

These stocks have great long-term prospects.
STOCKS・13 HOURS AGO

It's advice worth taking right now.
STOCKS・12 HOURS AGO
The Motley Fool