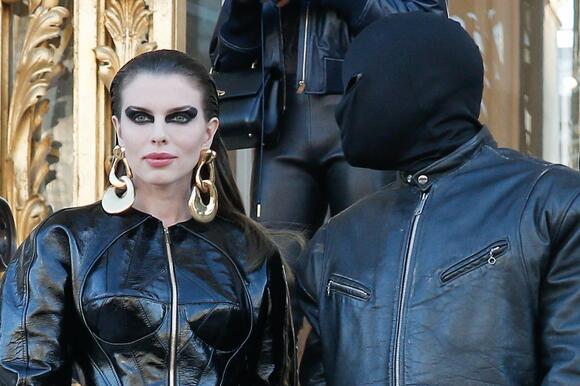 Julia Fox is continuing her takeover of Paris—Paris Fashion Week, that is—at the Spring 2022 couture shows. Accompanied by new boyfriend Kanye West, her latest look was spotted in Schiaparelli’s front row this morning alongside Laverne Cox and Chiara Ferragni.

Towering thigh-high boots have remained a routine style at brands like Vetements, Saint Laurent and Proenza Schouler. The pair adds a sultry touch to any outfit, while instantly streamlining it and bringing fuller coverage in colder months. “Pantaboots,” the pair’s edgier cousin, have also emerged in recent weeks by combining pants and boots at Richard Quinn, Dolce and Gabbana and Emilio Pucci.

Fox has worn a variety of sleek dresses and catsuits on past red carpets, hailing from Dior, Alexander Wang and Jean Paul Gaultier. The “No Sudden Moves” actress’ formal footwear has also included pointed-toe pumps by Christian Louboutin, Giuseppe Zanotti and Manolo Blahnik.

Recently, the star has primarily been seen in pointed-toe Diesel and Balenciaga boots, paired with edgy ensembles by both brands — as well as independent labels like Miaou.

Click through the gallery to see more of Fox’s best style moments.

She looks like the Joker 🤡 with so much make up plastered on her face all you can see is the white paleness skin color with dark rings around her eyes! It's sad when a woman has to compete with another !

I can see this train wreck coming from around the corner. her intention is to get the ring and commit him.🤑 🤑🤑

she needs to get her own style and quit trying to look like a Kardashian!

Click here to read the full article. If you purchase an independently reviewed product or service through a link on our website, Footwear News may receive an affiliate commission. Cara Delevingne played multiple roles at the Billboard Music Awards last night. Supermodel, red carpet stylist, and most of all, Megan Thee Stallion superfan. While on the red carpet, Delevingne stood behind the superstar rapper advising her on how to pose to show off her custom gown until she eventually jumped into the shot to do it for her. The 29-year-old model lifted up Stallion’s brown and black train that draped behind her. For...
MUSIC・1 DAY AGO
Footwear News

Heidi Klum brought her signature flair for the dramatic to the red carpet with husband Tom Kaulitz. The couple arrived in coordinating ensembles specifically for the Billboard Music Awards in Las Vegas on Sunday. Klum posed on the carpet in a light yellow dress by Maticevski. Her “Nightshift” gown featured...
LAS VEGAS, NV・2 DAYS AGO
People

Paulina Gretzky walked down the aisle in Vera Wang!. The bride shimmered during her wedding with pro golfer Dustin Johnson on Saturday at Tennessee's Blackberry Farm. Gretzky showed off the stunning look on Instagram Monday in a photo of the newlyweds kissing. "4/23/22♥," she simply captioned the post. For...
BEAUTY & FASHION・21 DAYS AGO
Footwear News

Sean ‘Diddy’ Combs turned the red carpet into a party as he arrived at the 2022 Billboard Music Awards. The multi-hyphenate superstar will host one of music’s biggest night held at the MGM Grand Garden Arena in Las Vegas on Sunday. The world-renowned entrepreneur arrived in a...
LAS VEGAS, NV・2 DAYS AGO
Footwear News

Chloe Bailey made a striking arrival at the 2022 Billboard Music Awards on Sunday. The star-studded celebration is held at the MGM Grand Garden Arena in Las Vegas. The multi-hyphenate phenom served a monochromatic moment in a black leather dress by Valdrin Shahiti. The slick turtleneck number was complete with pointy shoulders and a risky stomach cutout.
LAS VEGAS, NV・2 DAYS AGO

Mary J. Blige pulled out a head-turning ensemble to accept the Icon Award at the 2022 Billboard Music Awards held at the MGM Grand Garden Arena in Las Vegas on Sunday night. The Queen of Hip Hop and Soul was bestowed with the honor by Janet Jackson. Blige is the 11th artist to receive the Icon Award, which recognizes outstanding artists who have achieved excellence on the Billboard charts and have made an indelible mark on music itself.
LAS VEGAS, NV・2 DAYS AGO
Footwear News

Images of the Air Jordan 5 ‘Green Bean’ Have Emerged

Click here to read the full article. If you purchase an independently reviewed product or service through a link on our website, Footwear News may receive an affiliate commission. A beloved Air Jordan 5 style is coming back. Sneaker leak social media account @zSneakerheadz shared images of the forthcoming Air Jordan 5 “Green Bean” release on Instagram this week, which is a popular colorway of Michael Jordan’s signature shoe that debuted in September 2006. According to the account, the acclaimed look will return to shelves before month’s end. The latest reissue of the Air Jordan 5 “Green Bean” will feature a gray-based leather...
APPAREL・4 DAYS AGO
hotnewhiphop.com

Kim Kardashian's ex-husband, Damon Thomas, continues to "wish her the best," despite any false narratives about their past relationship. The 51-year-old sat down with DJ Vlad, looking back at his marriage with now-billionaire businesswoman Kim Kardashian in the early 2000s. He believes he's played a "part in their journey," however, he doesn't want to be known as "Kim Kardashian's husband" and wants to "get in control of [his] narrative," as many people fail to recognize he has won Grammys and even made it to the Oscars.
RELATIONSHIPS・21 DAYS AGO
Footwear News

Click here to read the full article. The Louis Vuitton Cruise 2023 show saw plenty of famous faces step out to take in Nicolas Ghesquière’s new designs in San Diego, Calif., on May 12. Everyone from Miranda Kerr and Maude Apatow to Emma Roberts and brand ambassador Chloë Grace Moretz flocked to the front row for the golden hour show. Model on the rise Natalia Bryant was also on hand at the star-studded event. The daughter of late legendary basketball player Kobe Bryant and Vanessa Bryant took to Instagram yesterday to share some snaps of her Louis Vuitton look, as well...
SAN DIEGO, CA・3 DAYS AGO

Click here to read the full article. Who’s in, who’s out, who’s been promoted and hired — FN covers all the industry changes in one place. Know of an executive on the move? Tell us at web@footwearnews.com. April 22, 2022: Zappos.com has named its first chief marketing officer in the company’s 23-year history. Ginny McCormick joined the e-commerce giant this week and brings extensive marketing experience in the toy industry. According to her LinkedIn profile, she most recently was marketing director of Worldwide Access Point at Amazon, but previously held leadership positions at Hasbro and Mattel. In her new role, Zappos...
BUSINESS・27 DAYS AGO
Footwear News

Click here to read the full article. Selena Gomez brought chic style to the stage while hosting “Saturday Night Live” this weekend in New York City. The star’s “SNL” debut is the penultimate episode of season 47, which ends next week. While taking the stage to deliver her monologue, the “Wizards of Waverly Place” star wore an elegant Mach & Mach minidress. Styled by Kate Young, the black number featured long sleeves with lightly flared cuffs and a mock-neck silhouette. Adding to its allure were a rounded side and back cutout for a modern touch. Completing the dress’ sleek whimsy were vertical...
NEW YORK CITY, NY・2 DAYS AGO
Footwear News

Click here to read the full article. Catch all the latest news about footwear industry acquisitions, and licensing and distribution agreements here. Got a deal in the works? Tell us at web@footwearnews.com. May 16, 2022: Resale technology platform Recurate has secured $14 million in new Series A funding. This funding round was led by Jump Capital, and includes industry leaders Gradient Ventures, XRC Labs, Victress Capital, Revolution’s Rise of the Rest Fund, and AngelList Early-Stage Quant Fund, as well as executives from Brooks Brothers, Chubbies, and Klaviyo, among others. The new investment brings Recurate’s total funding to over $17.5 million. According...
ECONOMY・1 DAY AGO
Footwear News

Janet Jackson hit the stage on Sunday night to present fellow iconic singer Mary J. Blige with the Icon Award at the 2022 Billboard Music Awards. The 56-year-old “All for You” hitmaker opted for a head-turning Thom Browne look for the special occasion, sporting a chic black suit complete with a cropped blazer, white shirt, and tie, and a long flared skirt. Jackson, who received the Billboard Icon Award herself in 2018, also wore lace-up boots featuring a block platform sole by the designer and a retro-inspired top hat, which pulled the ensemble together effortlessly.
LAS VEGAS, NV・2 DAYS AGO
Footwear News

Click here to read the full article. If you purchase an independently reviewed product or service through a link on our website, Footwear News may receive an affiliate commission. Venus Williams put her personal flair on a monochromatic moment for the reopening of Salvatore Ferragamo Palm Beach location on Worth Avenue. To celebrate, the Italian luxury fashion house hosted an end of season soiree in a private villa at the iconic Colony Hotel in Florida. The alfresco evening marked the finale of an immersive social experience that took place throughout the day on Palm Beach Island. A group of brand friends visited...
PALM BEACH, FL・4 DAYS AGO
Footwear News

Click here to read the full article. Footwear industry leaders are once again rallying against tariffs that are sending shoe prices soaring. In an open letter to President Biden on May 12, Matt Priest, president and CEO of the Footwear Distributors & Retailers of America (FDRA), again asked for the elimination of tariffs on shoes and other basic consumer goods to help lower recent price spikes on kids’ shoes. “We are at the point where families are facing generationally high cost increases on their kids’ shoes in addition to other household items,” Priest wrote in the letter. “Eliminating 301 tariffs is the...
BUSINESS・5 DAYS AGO
Footwear News

Click here to read the full article. A new Chick-fil-A employee unboxed his uniform in a now-viral TikTok video, leaving users commenting leaving compliments about its style. Shared by Jake Turner, he opens a paper bag and shows off the new uniform, including two tops, two pants and a pair of black slip-resistant sneakers. The post has already garnered over 400,000 views. “What do y’all think of the Chick-fil-A sandwich 3s? They’re actually not too bad, They gave us all this, and you only have to pay for the shoes,” Turner says, referring to the shoe model as “Sandwich 3s.” @trayjonturner...
BEHIND VIRAL VIDEOS・4 DAYS AGO
Footwear News

Click here to read the full article. Snipes has bolstered its executive team by hiring a former music executive as its next chief marketing officer. The retailer announced today that it has tapped Rich Foster to fill the role. Snipes said Foster will be tasked with overseeing marketing, community impact, creative innovation and social media initiatives in the position. Also, Snipes said Foster will be responsible for developing and executing creative marketing strategies that cement its leadership position in sneaker and streetwear with today’s young and culturally relevant consumer, and will work with its digital, retail and operations teams “to grow the...
BUSINESS・1 DAY AGO