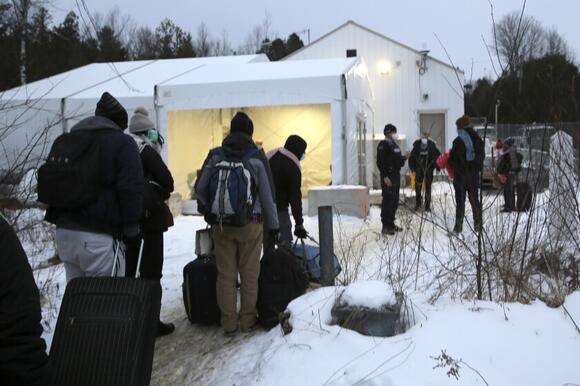 Whenever a bus arrives at the Greyhound station in Plattsburgh, New York, a small band of taxi drivers waits to drive passengers on a half-hour trip to a snowy, dead-end dirt road.

There, at the border with Canada, refugees pile out of taxis or vans several times a day, and Royal Canadian Mounted Police officers warn that they will be arrested for illegal entry if they cross, which they do. Most are soon released to pursue asylum, living and working freely while awaiting a decision.

“We have the hopes of everyone — be successful and have a change of life,” Alejandro Cortez, a 25-year-old Colombian man, said as he exited a taxi last week at the end of Roxham Road in Champlain, New York. The town of about 6,000 is directly across the border from Saint-Bernard-de-Lacolle, Quebec.

Cortez joins a renewed stream of migrants seeking refuge in Canada after a 20-month ban on asylum requests designed to prevent the spread of COVID-19. Families are once again lugging suitcases and carrying children across a remote, snow-covered ditch to the border.

Canada’s decision to lift the ban on Nov. 21 stands in marked contrast to the approach in the United States, where the Centers for Disease Control and Prevention has extended indefinitely a similar restriction on the border with Mexico that will enter its third year in March.

On Wednesday, a Justice Department attorney vigorously defended the ban against sharp questioning from federal appeals court judges about the scientific basis for such a far-reaching move against asylum.

The U.S. expelled migrants nearly 1.5 million times from March 2020 through November under what is known as Title 42 authority, named for a 1944 public health law that the Trump and Biden administrations have used to deny migrants a chance to seek asylum on grounds that it will curb the spread of the coronavirus. That accounts for about two of three arrests or expulsions at the border, most involving single adults and some families. Unaccompanied children have been exempt under President Joe Biden.

Fully vaccinated travelers have been able to enter the U.S. and Canada since November , but Canada went a step farther by reinstating a path to asylum.

Cortez arrived in the United States on a tourist visa five months ago. He said he couldn’t go back to Colombia because of violence and the disappearance of thousands of young men.

“All of that hurts a lot,” he said. “We have to run from our country.”

Asylum-seekers on the Canadian border began appearing at Roxham Road around the time Trump became president. How it became the favored place to cross into Canada isn't clear, but the migrants are taking advantage of a quirk in a 2002 agreement between the U.S. and Canada that says people seeking asylum must apply in the first country they arrive in.

Migrants who go to an official crossing — like the one where Interstate 87 ends just east of Roxham Road — are returned to the United States and told to apply there. But those who arrive in Canada at a location other than a port of entry, like Roxham Road, are allowed to stay and request protection.

Nearly 60,000 people sought asylum after illegally crossing the border into Canada from February 2017 through September, many at Roxham Road, about 30 miles (50 kilometers) south of Montreal, Canadian government statistics show.

In December, the number of asylum-seekers at the border in Quebec jumped to nearly 2,800. That's up from 832 in November and 96 in October, according to the statistics.

Canada lifted the asylum ban with little fanfare or public backlash, perhaps because the numbers are small compared with people crossing into the U.S. from Mexico.

Biden's decision to keep the Trump-era ban in place has come under scathing criticism from the United Nations refugee agency, legal scholars and advocates.

Under the ban, people from Mexico, Guatemala, Honduras and El Salvador, are bounced back to Mexico before being afforded rights under U.S. and international law to seek asylum. People from other countries are flown home without a chance at asylum.

Scientific arguments for Title 42 have met with skepticism from the start.

The Associated Press reported in 2020 that Vice President Mike Pence called CDC Director Dr. Robert Redfield in March of that year and told him to use the agency’s special legal authority to slash the number of asylum-seekers allowed into the country.

Pence made the request after a top agency doctor who oversees such orders refused to comply with the directive, saying there was no valid public health reason to issue it.

Dr. Anne Schuchat, the second-highest CDC official when she departed in May, told a congressional panel last year that “the bulk of the evidence at that time did not support this policy proposal.”

On Wednesday, Justice Department attorney Sharon Swingle insisted the ban is based on scientific expertise and prevents disease at crowded Border Patrol holding facilities. Facing persistent questioning from judges on a three-member panel in Washington, she acknowledged there were no affidavits in court records to explain the order’s scientific foundation.

Within hours of the November change by the Canadian government, immigrants started arriving in large numbers at Roxham Road, said Janet McFetridge, of Plattsburg Cares , a group that provides hats, mittens and scarves to people crossing the border in the dead of winter. She said people are eager to cross while they can.

“There definitely is a fear that it's going to close suddenly,” she said while waiting on Roxham Road for the next group of migrants.

A Canadian officer said in French to a woman and her traveling companion, who was carrying a baby, that it was illegal to enter Canada there.

“If you cross here, you will be arrested," he said.

"After Ukraine, if we're given the command, in six seconds we'll show you what we're capable of," Chechen leader Ramzan Kadyrov said.
POLITICS・2 DAYS AGO
Daily Beast

Sen. Ted Cruz (R-TX) abruptly walked off from a British journalist’s questions about gun violence in America two days after an elementary school massacre in his state left 19 children and two adults dead. Cruz, who is due to appear at a National Rifle Association convention this weekend, became...
CONGRESS & COURTS・1 DAY AGO
americanmilitarynews.com

Expectant mothers in quarantine are only given two painkiller pills a day — the same treatment given to all COVID-19 patients, sources told RFA.
PUBLIC HEALTH・3 DAYS AGO

The Russian official read out an appeal to the president demanding the immediate withdrawal of troops from the territory of Ukraine.
POLITICS・14 HOURS AGO
Markets Insider

Russia was invading, so a Ukrainian converted his life savings of $10,500 into the crypto token terra. Then the token crashed.

The Kyiv, Ukraine, resident said he wanted to avoid the risks from Russia's war or a currency collapse.
MARKETS・3 DAYS AGO
Daily Mail

A veteran Russian legislator has issued an appeal to Vladimir Putin to stop military action, bring his troops home and end the war in Ukraine. Communist deputy Leonid Vasyukevich, 69, blasted the use of Moscow’s servicemen in Ukraine, as a Russian court dismissed more than 100 national guardsmen in the first case of soldiers refusing to fight in Ukraine as politicians demanded the army return home.
POLITICS・10 HOURS AGO
Newsweek

Putin's Elite Soldiers Getting Wiped Out as Russia Makes Mistakes—U.K.

The British defense ministry said in its daily update of the Ukraine war that Russia's airborne forces have been used in the wrong way.
MILITARY・1 DAY AGO

'Civilization may not survive this': US billionaire George Soros says Russia may have started World War Three and the only way to save mankind is to defeat Putin

Billionaire financier George Soros said on Tuesday that Russia's invasion of Ukraine may have been the beginning of World War Three and the best way to preserve free civilisation was for the West to defeat President Vladimir Putin's forces. Soros, 91, a legendary hedge fund manager who earned fame by...
WORLD・3 DAYS AGO
Daily Mail

Ministers are planning a mass deportation next week of foreign criminals and migrants who are in the UK illegally. The carefully choreographed operation, involving up to 300 foreign nationals, is believed to be the biggest deportation exercise ever attempted on one day. Charter flights booked by the Home Office are...
IMMIGRATION・33 MINUTES AGO
Reuters