‘Love It or List It’ Hosts Hilary Farr and David Visentin Have a Great Friendship! See Their Best Quotes About Each Other 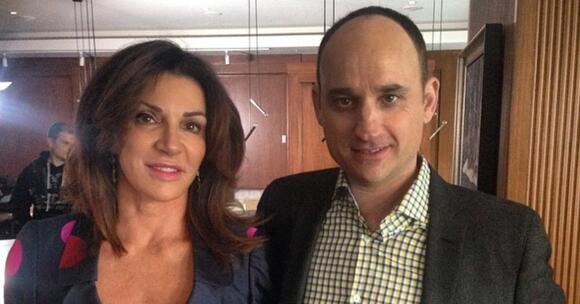 Love It or List It hosts Hilary Farr and David Visentin have established themselves as one of HGTV’s most iconic duos. The first season of the home design show aired in 2008 and was only just the beginning of their friendship. After more than a decade of helping clients find their dream homes, Hilary and David’s bond has withstood the test of time.

Though the premise of Love It or List It sees David and Hilary competing against each other to win clients over, their friendship offscreen is playful and fun. The pair met for the first time during the audition process for the show.

“Once I was chosen as Love It or List It’s on-air designer, I was paired with a few realtors [as potential costars],” Hilary explained to TV Insider in July 2018. “I had my eye on a tall, dark-haired guy with blue eyes, but David beat the competition, and the rest is history. We were put together like an arranged marriage.”

Both the interior designer and the real estate agent are from Canada. Hilary grew up performing in theater and landed a role in The Rocky Horror Picture Show in 1975. She balanced an entertainment career and passion for home renovation before landing the life-changing hosting role on Love It or List It. David followed in his father’s footsteps and got his real estate license after high school. He initially wanted to attend theater school before making his big career move.

“Not only does real estate run in the family, but both my brothers and sister have done theater! It was a dream extension for me to take my real estate skills and confidence in front of the camera and put them together for the show,” the Country Living Realty agent told AZ Central in September 2016. “I am going to say the mesh has been very successful as we are now busy taping episode 165! I have to give credit to Hilary. The banter we enjoy is because of what we are able to create together.”

The HGTV duo does get along outside of the show but have done their fair share of bickering on camera. Their competitive nature is part of the reason why Love It or List It has become so successful and expanded with spinoffs in other countries.

“We are good friends,” the Run For Your Wife actress told Star Tribune in February 2017. “But sometimes, it’s like having a brother around — he’s annoying but you make each other laugh.”

Keep scrolling to see Hilary and David’s best quotes about their friendship.

I LOVE these 2 together!! They play well off of each other!! Watch them all the time.

Bindi Irwin is looking back on some fond memories with Chandler Powell. Irwin, 23, shared a set of snapshots to Instagram on Wednesday that featured her husband, 25, and a pair of meerkats at the Australia Zoo. What was supposed to be a sweet moment ended up being a funny...
CELEBRITIES・14 DAYS AGO
Closer Weekly

There is nothing Salma Hayek loves more than spending time with her daughter, Valentina Paloma Pinault. The Eternals star and her husband, François-Henri Pinault, welcomed their daughter in 2007. Over the years, Salma has spoken out about how she balances her busy Hollywood career with motherhood. “I like being...
FAMILY RELATIONSHIPS・29 DAYS AGO
Closer Weekly

When it comes to her love life, Courteney Cox does not hold back from expressing how happy she is with her boyfriend, Johnny McDaid. The couple met in 2013 and got engaged the following year. After a brief breakup in 2015, they found their way back to each other and have been sharing the cutest details about their relationship ever since.
CELEBRITIES・7 DAYS AGO
People

They'll be the talk of the Ton. Nicola Coughlan confirmed the upcoming third season of Bridgerton will focus on the love story between her character Penelope and Colin Bridgerton (Luke Newton). In a panel conversation at Netflix's FYSEE Space's opening night ATAS panel on Sunday night, Coughlan, 35, revealed the...
TV SERIES・2 DAYS AGO

"Downton Abbey": A Look Back at the Show's Best Weddings

Romance has been a big part of "Downton Abbey" from the very beginning. Some relationships on the show have ended very happily for everyone involved, some have taken a plethora of serious drama to get to the good parts, and some haven't ended happily at all. Though not every romance on "Downton" has ended at the altar, there have been quite a few memorable weddings throughout the franchise's run, and each one has been special in its own way.
TV & VIDEOS・5 DAYS AGO
Hello Magazine

Playing bad has been very, very good for the actor. It took 42 years of working in soaps for John Aniston (Victor, Days of Our Lives) to get his first Daytime Emmy nomination back in 2017. And although he wound up losing to Steve Burton — who at the time was playing Dylan on The Young and the Restless — we’re thrilled to announce that this year, Aniston is 100 percent guaranteed to walk away a winner. Why? Because the National Academy of Television Arts and Sciences has announced that during the live ceremony held on June 24, Aniston will be the recipient of the Lifetime Achievement Award.
CELEBRITIES・22 DAYS AGO
Distractify

Did Kenya Moore Ever Date Her 'DWTS' Partner, Brandon Armstrong?

In the 10 years since Kenya Moore first joined the cast of The Real Housewives of Atlanta, viewers have seen the Miss USA winner go through her fair share of relationship woes. From her relationship with Walter Jackson (which a few of her co-stars questioned), to her marriage and subsequent...
CELEBRITIES・19 DAYS AGO

Sandra Bullock Is All About Her 2 Kids! See the Actress’ Rare Photos With Louis and Laila

Sandra Bullock isn’t one to share photos of her two kids on social media. Thanks to rare pics from her fun outings with son Louis and daughter Laila, however, fans have gotten glimpses inside the Bird Box actress’ life. Sandra became a mom when she adopted her eldest...
CELEBRITIES・6 DAYS AGO
Hello Magazine

The Today Show stars, including Hoda Kotb, Savannah Guthrie, and Craig Melvin, are reeling from the death of a beloved fellow Today host, one whose hiring onto the show made history at NBC studios. The co-hosts took a moment out of Monday morning's show to honor the legacy of Jim...
CELEBRITIES・23 DAYS AGO
The Independent

A wedding caterer has been praised for turning down all events where the bride and groom are asking their guests to pay for their own meals.In a recent post shared on the discussion-based site Mumsnet, a user explained that they run a “wedding catering company” that is “based on a food truck” and works for “less formal weddings”.They then revealed that some couples who have reached out to them about catering have been expecting their guests to purchase their own dinners at their weddings, a concept that the caterer said they have been “turning down” because they believe it is...
RELATIONSHIP ADVICE・23 DAYS AGO
Closer Weekly

Fuller House star Jodie Sweetin met her perfect match! The actress announced her engagement to Mescal Wasilewski in January 2022 on Instagram with a sweet photo showing off her diamond ring. Keep scrolling to meet the man who won her heart. Who Is Jodie Sweetin’s Fiancé Mescal Wasilewski?
CELEBRITIES・26 DAYS AGO

90 Day Fiancé stars Anna-Marie Campisi and Mursel Mistanoglu have added a little boy to their family! The couple, who tied the knot on Season 7 of the TLC reality show, announced on Instagram this week that their son, Gokhan John, had been born via a surrogate on Monday, April 11 after the couple's initial struggle with fertility.
FAMILY RELATIONSHIPS・22 DAYS AGO
OK! Magazine

Ryan Seacrest is weighing in on the ongoing court battle between the Kardashian-Jenner family and Blac Chyna.According to a new report from Radar, the TV producer made some bombshell claims in his deposition, which the famous family is trying to get blocked from the jury. As reported by the outlet, Seacrest — who is scheduled to take the stand in the trial — shockingly revealed in his deposition that he wanted Chyna's show with Rob Kardashian, Rob & Chyna, to move forward, despite the Kardashian-Jenner squad's claim that there was fear over Rob's safety as a result of the exes'...
CELEBRITIES・22 DAYS AGO
Popculture

One of the stars of This Is Us is on the move to a new network in advance of the show's series finale. Deadline reported in March that Chris Sullivan, who plays Toby on the NBC series, will headline a comedy pilot for ABC. His new show is set to be titled The Son In Law.
TV SERIES・22 DAYS AGO
Closer Weekly

Josh Brolin’s Favorite Role Is Being a Dad! Cutest Photos of the ‘Avengers’ Actor’s 4 Kids

Avengers: Endgame actor Josh Brolin is a superhero dad! Spending time with his four kids is something he values above anything else. The Academy Award nominee shares son Trevor and daughter Eden with ex-wife Alice Adair, and daughters Westlyn and Chapel with wife Kathryn Boyd. Josh’s marriage to Alice lasted...
FAMILY RELATIONSHIPS・28 DAYS AGO
The US Sun

LITTLE People, Big World's Matt Roloff has thrown shade at his sons Zach, Jeremy, and Jacob, after he was slammed by fans for not selling his $4million farm to his own family. Matt, 60, has revealed on Instagram that he is officially selling the Oregon pumpkin farm. The LPBW star...
CELEBRITIES・5 DAYS AGO
Closer Weekly

Celebrity chef Bobby Flay is lucky in love with his girlfriend, Christina Pérez! The happy couple stepped out for a rare appearance at the premiere of The Offer in New York City on Sunday, April 24. The television personality wore a plaid blazer and jeans while the Vogue contributor...
CELEBRITIES・23 DAYS AGO
Closer Weekly

Melissa Gilbert is proud of her blended family, so it doesn’t come as a surprise she’ll share photos when they all get together. The Little House on the Prairie alum is the doting mom of two kids and the loving stepmom of five. Melissa shares her eldest son,...
FAMILY RELATIONSHIPS・13 DAYS AGO
Soaps In Depth

Steve Burton Joins the Cast of DAYS OF OUR LIVES: BEYOND SALEM!

Soap star Steve Burton is reprising one of his old roles, but sorry, GENERAL HOSPITAL fans, it’s not Jason Morgan. The actor has been tapped to play Harris Michaels on the upcoming DAYS OF OUR LIVES: BEYOND SALEM (Chapter 2)!. DAYS was actually Burton’s big break in daytime (his...
MOVIES・19 DAYS AGO