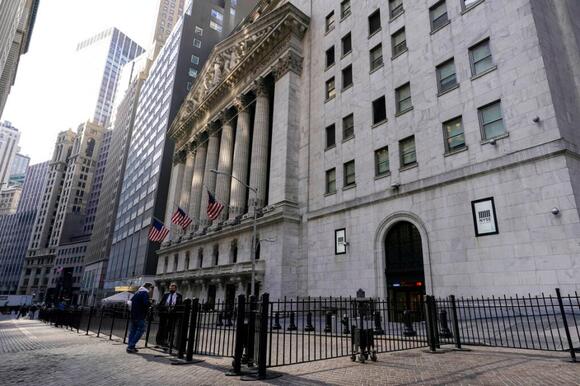 NEW YORK (AP) — Stocks sank in morning trading on Wall Street Monday, putting the benchmark S&P 500 on track for what the market considers a correction — a drop of 10% or more from its most recent high.

The declines in the market extend a recent run of losses that have left major indexes in a January slump. The Dow Jones Industrial Average fell 712 points, or 2.1%, to 33,544 and the Nasdaq fell 3%.

Investors have been growing increasingly worried about how aggressively the Federal Reserve, which holds a policy meeting this week, might act to cool rising inflation. Wall Street anticipates the first increase in interest rates as early as March, and investors have grown increasingly concerned the Fed will have to raise rates more quickly and more often that the central bank originally indicated.

The Fed’s benchmark short-term interest rate is currently in a range of 0% to 0.25%. Investors now see a nearly 70% chance that the Fed will raise the rate by at least one percentage point by the end of the year, according to CME Group’s Fed Watch tool.

Federal Reserve policymakers will release their latest statement on Wednesday.

Prices leap 7% in past year, inflation soars to highest rate in 40 years

Technology stocks were among the heaviest weights on the market as investors shift money away from pricier stocks in anticipation of rising interest rates. Higher rates make shares in high-flying tech companies and other expensive growth stocks relatively less attractive.

A wide range of retailers, travel-related companies and others that rely on direct consumer spending also fell broadly and weighed down the broader market. Target fell 1.1% and Carnival fell 5%.

Florida bill would ban talk of sexual orientation, gender identity in the classroom

Inflation is putting pressure on businesses and consumers as demand for goods continues to outpace supplies. Companies have been warning that supply chain problems and rising raw materials costs could crimp their finances. Retailers, food producers and others have been raising prices on goods to try and offse the impact.

Rising costs are raising concerns that consumers will start to ease spending because of the persistent pressure on their wallets.

Monday is a relatively quiet day for earnings, but the pace picks up on Tuesday with American Express, Johnson & Johnson, and Microsoft reporting results. Boeing and Tesla report their results on Wednesday. McDonald’s, Southwest Airlines and Apple report results on Thursday.

Wall Street also has several key economic reports to look forward this week. Investors will get more data on how consumers feel with the release on Tuesday of The Conference Board’s Consumer Confidence Index for January. The Commerce Department releases its report on fourth-quarter gross domestic product on Thursday and its report on personal income and spending for December on Friday.

Stocks fell in morning trading on Wall Street Thursday, deepening a slump for major indexes as persistently high inflation continues to weigh on the economy.
STOCKS・22 HOURS AGO
WFLA

A bear market may be on the horizon. Here’s what that means

The familiar rallying cry to “buy the dip” after every market wobble is giving way to fear that the dip is turning into a crater.
STOCKS・16 HOURS AGO
The Motley Fool

As the broader market continues to fall, some investors may view the EV leader's stock slump as a buying opportunity. Are they right?
STOCKS・23 MINUTES AGO

These durable companies can deliver steady returns.
STOCKS・23 MINUTES AGO
The US Sun

MILLIONS of Americans are set to receive Social Security checks worth up to $1,657 tomorrow. The cash boost will come just 48 hours before Supplemental Security Income payments, worth up to $841, are set to land in around eight million bank accounts on April 29. Seniors with birthdays on the...
BUSINESS・24 DAYS AGO
dailyhodl.com

Tesla CEO Elon Musk said this week that the U.S. must "stop the infighting" in order to be competitive with China, warning that the world's second-largest economy will someday dwarf America's output. "What we’re going to see with China, for the first time that anyone can remember who is alive,...
ECONOMY・2 DAYS AGO

A member of a superyacht crew also told The Times of London that one owner had his bar stools made from whale foreskin.
BOATS & WATERCRAFTS・26 DAYS AGO
WFLA

Man stranded on side of road kills firefighter who stopped to help, police say

Investigators have revealed new details in the tragic death of a good Samaritan who stopped to assist a stranded motorist along an Indiana road, only to wind up being shot and killed by the very person he stopped to lend aid to.
HARRISON COUNTY, IN・1 DAY AGO
Markets Insider

Tesla has started underwriting auto insurance. Buffett previously said he would bet against any car company becoming a big winner in the space.
ECONOMY・24 DAYS AGO
WFLA

Polk County deputy wrangles snake out from behind woman’s freezer

TAMPA, Fla. (WFLA) — A Polk County deputy added snake wrangler to his resume after getting a serpent out of a woman’s house. The Polk County Sheriff’s Office tweeted Tuesday that Deputy Coquyt, a canine handler for the sheriff’s office, visited a resident’s home to get the snake off the woman’s dryer on her back […]
POLK COUNTY, FL・2 DAYS AGO

St. Petersburg police are investigating a homicide after a man was found dead in a garage Tuesday.
SAINT PETERSBURG, FL・2 DAYS AGO
WFLA

A Pinellas County deputy was fired from her job after she was charged with driving under the influence.
SAINT PETERSBURG, FL・2 DAYS AGO
WFLA

A Florida man was arrested Tuesday for using a sledgehammer to steal over $800 from a laundromat.
CHARLOTTE COUNTY, FL・2 DAYS AGO
WFLA

A woman is accused of throwing a snake at a Florida deputy after leading authorities on a pursuit that ended in a crash, according to the Martin County Sheriff's Office.
FLORIDA STATE・19 HOURS AGO
WFLA

A Florida man was arrested on a DUI charge after he drove his car up a telephone pole in Tallahassee over the weekend.
TALLAHASSEE, FL・2 DAYS AGO
WFLA

A woman whose voice could be heard by rescue crews from the rubble of the condo tower that collapsed in Surfside, Florida, last June has been identified.
SURFSIDE, FL・2 DAYS AGO
WFLA

A St. Petersburg man, who is accused of killing a pedestrian, is behind bars thanks to two bystanders who were in the right place at the right time.
SAINT PETERSBURG, FL・2 DAYS AGO
WFLA

The Manatee County Sheriff's Office is asking for the public's help in locating a missing man who is considered endangered.
MANATEE COUNTY, FL・2 DAYS AGO