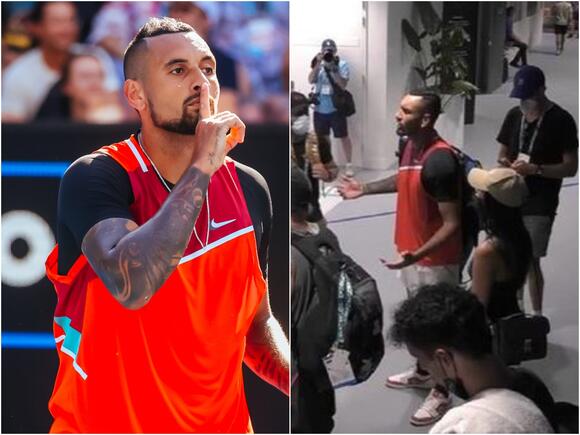 Nick Kyrgios claimed an opponent's coach and trainer offered to fight him in the locker room after an Australian Open match.

The Australian said the incident happened after he and fellow Aussie Thanasi Kokkinakis beat top seeds Mate Pavic and Nikola Mektic in straight sets in the second round of the men's doubles tournament on Friday.

"Just letting you know after yesterday's chop fest in doubles my opponents coach and trainer proceeded to threaten to fight in the players gym," Kyrgios tweeted.

"Tennis is a soft soft sport," he added. "All because I moved and hit them with a tennis ball."

Kokkinakis later quoted the tweeting, saying: "That was crazy!! Mans thought it was UFC."

Channel Nine posted footage of Kyrgios and Kokkinakis informing their team of the incident, while retired tennis star Sam Groth revealed Kokkinakis texted him during the altercation.

"Thanasi actually messaged me as it was happening," said Groth. "He said Nick got accosted in the locker room by Pavic's fitness trainer.

"Obviously they weren't very happy. They are the number one team in the world, the number one seeds. I guess going down to Thanasi and Nick, they didn't accept what was going on with the crowd, what was happening with Nick.

"I think it is a little bit soft to take it off the court and into the locker room. And not even the players, from someone from the team. It is not necessary."

Pavic and Mektic were unhappy with the atmosphere at the Show Court Arena for their clash with home favorites Kyrgios and Kokkinakis, with Pavic accusing the crowd of being disrespectful.

"It's loud. They are pretty loud," Pavic said after the defeat. "Obviously they cheer for Aussies. It wouldn't hurt them to show some respect to all opponents, to other players."

"It all went very fast, very loud," said Mektic. "We barely survived yesterday just to fight another day. The guys played really well. They're a nasty team to beat here."

The pair also appeared to be displeased that Kyrgios had aimed several shots at the players' bodies while they were at the net, a standard practise in doubles play, usually intended to cramp opponents for space and force them into errors.

"Given Nick's popularity and the eyeballs that he brings, there was always going to be that [boisterous crowd] and you've got to be ready for that," he said speaking on Channel Nine.

"What I've loved about Nick's matches so far in this tournament is it's provided an atmosphere like we used to have in Davis Cup, a parochial advantage, and of course you're going to have that."

Kyrgios described the crowd during his second round singles defeat to Daniil Medvedev as being like a "zoo."

"If you went to Andy Roddick at Arthur Ashe stadium, you don't think the New York crowd are going for him in a night match?" continued Woodbridge. "And you don't think in Paris when Gael Monfils starts putting on a show at Roland-Garros the French crowd are not going to be behind him? That's what it's all about.

"So yeah, I can understand exactly how the Croatians felt, but that's what you have to deal with."

Kyrgios and Kokkinakis beat Gonzalo Escobar and Ariel Behar in the third round on Sunday to set up a quarterfinal clash with Tim Putz and Michael Venus on Tuesday.

The speedy US Women's National Team midfielder is a lethal competitor on the pitch, but her "off-day vibes" always involve lounging on the couch.
FIFA・7 HOURS AGO