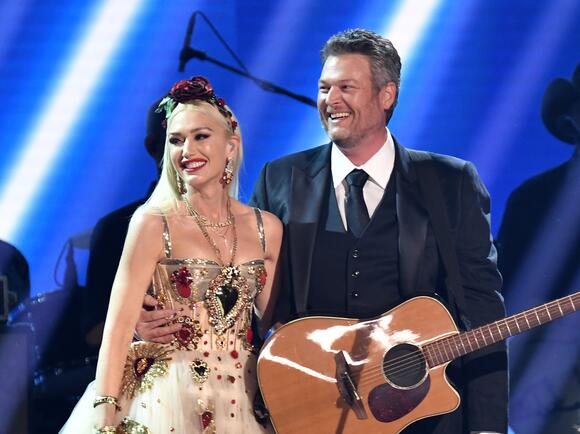 Country singer Blake Shelton has revealed a rare story about his life as a stepdad to Gwen Stefani’s three kids: Kingston, 15, Zuma, 13, and Apollo, seven.

While speaking to Sounds Like Nashville, Shelton went into detail about his first Thanksgiving with Stefani as husband and wife.

Prior to the holiday, Shelton was in the midst of working on The Voice and did a performance at the CMA Awards. However, outside of work, his family was already making plans for their Thanksgiving dinner, which included a request from Stefani’s kids for a bacon-wrapped turkey.

“It’s happening,” Shelton said about this dish. “There’s no talking them out of it, based on the picture that they saw, which was the greatest picture you’ve ever seen.”

Stefani, 52, and Shelton, 45, first met while working on The Voice together in 2014. In November 2015, the TV hosts publicly confirmed their relationship . They officially tied the knot this past July.

While speaking on The Ride with Kimo & Heather , the “Minimum Wage” singer said that while he takes his job as a father quite seriously, he also has fun with it.

"I take it very serious, but I also have a blast with it,” he said.

"I don’t take it so serious that I’m not enjoying this time because I really am, especially now that we’re five years into this thing,” he added. “I can’t imagine my life without these kids now."

Shelton also expressed that he grew up with a stepdad himself who was a great role model.

Shelton has still had his fair share of challenges as a parent to three kids. During a July 2020 interview on TODAY , Shelton was asked about an Instagram post that Stefani had shared for father’s day.

“Happy father’s day @blakeshelton thank u for helping me raise these boys!!” she wrote in the caption. “#weloveyou!”

Discussing this tribute, Shelton noted that becoming a father was a little “scary” for him.

“That’s a scary moment for me because for one thing, for me to be with the kids all the time and be their buddy,” he explained.

“But then you do have to consider after a while they start to listen to things that you say and there’s a lot of responsibility that comes with that, â€‹â€‹which is new to me,” he added.

Robin Roberts got emotional as she opened up about her relationship with partner Amber Laign, especially in the midst of a challenging health battle. The Good Morning America star made an appearance on The Ellen DeGeneres Show to promote her new book, Brighter By the Day. VIDEO: Robin Roberts enjoys...
CELEBRITIES・27 DAYS AGO
SheKnows

Click here to read the full article. It seems like everyone was rooting for Renée Zellweger and Ant Anstead to get together, including an unexpected duo: the Property Brothers. Drew and Jonathan Scott recently revealed that they were the ones that ended up getting Zellweger and Anstead to meet, and subsequently fall in love. And their hard work ended up paying off! Back on April 14, 2022, the Scott brothers sat down with ExtraTV to talk about everything from Drew’s upcoming fatherhood to Jonathan loving GF Zooey Deschanel’s Vanity Fair gown. While we loved the entire interview, we’re losing it over...
CELEBRITIES・28 DAYS AGO
Hello Magazine

Hoda Kotb took to social media to show her support for her co-star and close friend Jenna Bush Hager as she embarked on a brand new adventure. The Today host shared a snapshot of her co-host's book tour schedule, which took her around the country to talk about her latest release with sister Barbara P. Bush.
CELEBRITIES・28 DAYS AGO
Popculture

One of the stars of This Is Us is on the move to a new network in advance of the show's series finale. Deadline reported in March that Chris Sullivan, who plays Toby on the NBC series, will headline a comedy pilot for ABC. His new show is set to be titled The Son In Law.
TV SERIES・26 DAYS AGO

Kate Hudson has realized one of her dreams and has taken to Instagram to share the incredible news with her 15 million followers. Sharing two pictures of her looking casual in a pair of baggy dip-dyed trousers and a white tank top, and singing into a microphone, the actress announced a surprising career change.
CELEBRITIES・27 DAYS AGO
Outsider.com

Paulina Gretzky walked down the aisle in Vera Wang!. The bride shimmered during her wedding with pro golfer Dustin Johnson on Saturday at Tennessee's Blackberry Farm. Gretzky showed off the stunning look on Instagram Monday in a photo of the newlyweds kissing. "4/23/22♥," she simply captioned the post. For...
BEAUTY & FASHION・26 DAYS AGO
Popculture

Spring is always a big time for engagements and weddings, and two beloved internet personalities are the latest to update their relationship status. On April 18, Rachel "Seltzer" Quirico revealed she and longtime boyfriend Trevor "TorcH" Housten were tying the knot after 17 years together. Both of them are beloved figures in the esports world, with Seltzer notably starring in the Syfy reality show WCG Ultimate Gamer. She's also hosted numerous esports tournaments and events for TV/streaming outlets; she also made a recent appearance on G4 TV's Boosted.
RELATIONSHIP ADVICE・27 DAYS AGO

90 Day Fiancé stars Anna-Marie Campisi and Mursel Mistanoglu have added a little boy to their family! The couple, who tied the knot on Season 7 of the TLC reality show, announced on Instagram this week that their son, Gokhan John, had been born via a surrogate on Monday, April 11 after the couple's initial struggle with fertility.
FAMILY RELATIONSHIPS・26 DAYS AGO
Hello Magazine

Sharon Osbourne opened up about everything from her family life to her health in a tell-all interview over the weekend. And during the chat, the TV favorite spoke out about her devastating battle with bulimia, which she has been living with for many years. Talking to The Times, she told...
CELEBRITIES・26 DAYS AGO
hotnewhiphop.com

It seems Coi Leray is getting fed up with the drama. She and her father, Benzino, have not seen eye to eye for quite some time, and despite numerous attempts to mend their relationship, they keep ending up back at square one. Yesterday, 50 Cent, whose been feuding with Benzino...
CELEBRITIES・28 DAYS AGO
The Independent

Shakira is being praised by fans after successfully performing a viral TikTok dance in six-inch heeled boots.This week, the singer appeared on The Tonight Show Starring Jimmy Fallon, where she and host Jimmy Fallon competed against one another in a “Watch-It-Once TikTok Challenge”.During the segment, the pair were tasked with learning viral dances on the app with just one viewing, with Shakira and Fallon beginning with the dance choreographed by Jess Qualter and Brooke Blewitt that accompanies a TikTok song created by Duke & Jones of Louis Theroux rapping.After watching the dance a second time, despite the rules, Shakira proceeded...
THEATER & DANCE・2 DAYS AGO