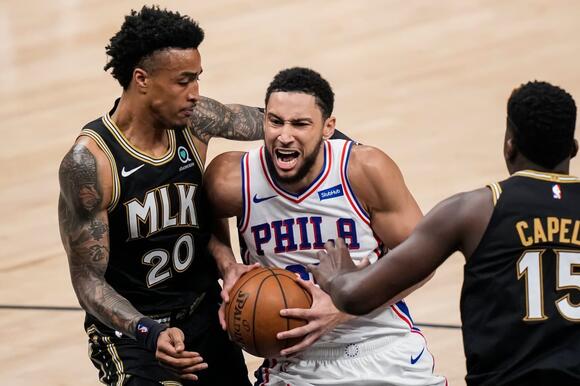 After weeks of speculation, it appears the trade negotiations between the Atlanta Hawks and Philadelphia 76ers are cooling off. In case you missed it, the Hawks emerged as serious suitors for Simmons. The 6'10 point guard has not played for the 76ers since an embarrassing playoff series against the Hawks last summer.

According to Shams Charania of The Athletic , the 76ers asking price remains too high for the Hawks. To acquire Simmons, the Hawks would have to deal John Collins, multiple first-round draft picks, and take on Tobias Harris who is in the third year of a massive five-year contract. You can read the full article by clicking on the tweet below.

I understand the allure of waiting for James Harden. Back when 76ers General Manager Daryl Morey was in Houston, he built a championship contender around Harden. However, that was years ago and Harden's game has fallen off since that time. Not to mention, Morey is wasting another season of Joel Embiid's prime.

We have a little over 2.5 weeks until the February 10 trade deadline. I fully expect the Hawks to make more trades in the meantime, even if they do not involve Simmons. Stay locked into Sports Illustrated's AllHawks.com for breaking news, highlights, and analysis.

Cam Reddish Out of Knicks Rotation

A daring trade could save two NBA teams from mediocrity.
ATLANTA, GA・2 DAYS AGO
All Hawks

Despite not being in the Draft Lottery, Atlanta Hawks fans still have reasons to watch.
ATLANTA, GA・2 DAYS AGO
All Hawks

The Atlanta Hawks coaching staff must improve this summer.
ATLANTA, GA・21 HOURS AGO
All Hawks

How Atlanta Hawks Were Impacted by Draft Lottery

The two hoopers have plenty to discuss in an upcoming podcast episode.
ATLANTA, GA・1 HOUR AGO