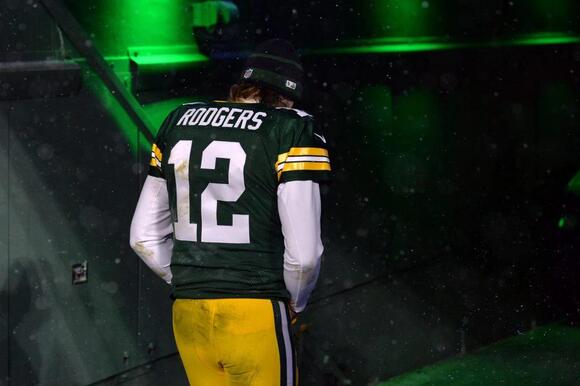 Aaron Rodgers and the Green Bay Packers are still recovering from another ugly playoff exit with looming questions about the future. With Rodgers already under fire from the NFL world , now a current coach is delivering some strong criticisms of the NFL MVP.

Rodgers delivered plenty of headlines in 2021. He demanded a trade before the 2021 NFL Draft, with the reports hanging a cloud over a day that the Packers fan base typically. Weeks later, details came out about the rift between Rodgers and the front office .

He eventually reported for training camp and sat out the preseason. In Week 1, the New Orleans Saints crushed Green Bay 38-3 and Rodgers threw two interceptions without a touchdown. After the game, an NFL executive ripped Rodgers’ offseason behavior for causing the team’s struggles.

The three-time NFL MVP responded with a dominant run during the regular season and will likely win consecutive MVP awards. But he also found himself in hot water. After telling reports this summer he was ‘immunized’, Green Bay’s quarterback tested positive for COVID-19 and missed the Kansas City Chiefs game as an unvaccinated player.

Public criticisms only got worse from weekly appearances on the Pat McAfee Show, speaking out on the vaccination and blasting ‘cancel culture’ for trying to get him. The NFL later refuted some of the claims Rodgers made.

Much of the criticism and mockery of Rodgers stopped as the Packers’ quarterback dominated on the field. But after another rough playoff performance, sending his postseason record to 0-4 against the San Francisco 49ers, an NFL coach didn’t hold back to The Athletic’s Mike Sando .

“Rodgers wants to talk about vaccine mandates and cancel culture, while Brady talks about all ball. Rodgers loves the standing invite on the A.J. Hawk show (Pat McAfee Show) and he wants to talk about cancel culture, woke mob and every other thing that doesn’t do anything but splinter and unfocus the group. To me, Rodgers doesn’t show the focus that it really takes to win the multiple championships.” 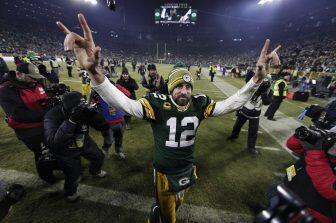 Also Read:
The Aaron Rodgers era is over, it’s time for a Green Bay Packers rebuild in 2022

Rodgers, 38, will have a decision to make this offseason. He is still playing at an elite level and could return in 2022, either for the Packers or demanding a trade to another NFL team. But if he wants to be out of the spotlight, beginning the next chapter of his life, retirement is a very real possibility.

He's worn out his welcome and is probably done in GB. His other man-bun type interests are also a distraction but at least his comments about Biden were spot on.

An anonymous NFL coach ? No balls to identify yourself with your criticism? Probably a coach who couldn’t make the playoffs

Rodgers is overrated. He is an average quarterback at best and needs to retire.

The 2021 season is in the books and defensive play culminated in the Los Angeles Rams becoming Super Bowl champions.
NFL・1 DAY AGO
Sportsnaut

Washington Commanders quarterback Carson Wentz is excited for a fresh start with a new organization. While he is focused on
INDIANAPOLIS, IN・9 HOURS AGO
Sportsnaut

An eventual Marquise Brown contract extension will likely be very expensive for the Arizona Cardinals. However, after trading a first-round
GLENDALE, AZ・8 HOURS AGO
Sportsnaut

Following their surprise Super Bowl LVI appearance, one of the top defenders and team captain Jessie Bates was hit with
CINCINNATI, OH・1 DAY AGO

The Dallas Cowboys are the current home of one of the most explosive and promising young defenders in the NFL.
ARLINGTON, TX・20 HOURS AGO
Sportsnaut

Our MLB Games Today schedule is back for the 2022 MLB season. Major League Baseball ended its lockout, officially clearing
NFL・13 HOURS AGO
Sportsnaut

The Chicago Bears released quarterback Nick Foles on May 1, making him a free agent. Now that the former Super
INDIANAPOLIS, IN・1 HOUR AGO
Sportsnaut

The Mountain West Conference announced Friday that it will eliminate its two-division format beginning with the 2023 season. The Mountain
COLLEGE SPORTS・2 HOURS AGO
Sportsnaut

Deion Sanders was on the receiving end of a pretty serious claim from Alabama head coach Nick Saban on Wednesday
JACKSON, MS・23 HOURS AGO

Alex Rodriguez celebrity to invest in PFL MMA, joins league’s board of directors

From the very first time Dalvin Cook took the field with the Minnesota Vikings after being the 41st pick in
MINNEAPOLIS, MN・1 DAY AGO
Sportsnaut

The 2000 Baltimore Ravens were a popcorn-worthy time. Long before we streamed highlights on our cell phones and could catch
BALTIMORE, MD・2 DAYS AGO
Sportsnaut

Joe Burrow has set the standard for success across college football that has become synonymous to his namesake. Any time
BATON ROUGE, LA・8 HOURS AGO
Sportsnaut

Chances are, when compared to last year, everyone involved with the New York Jets are feeling 100x better about their
NFL・1 DAY AGO