Why Nio Stock Is Sinking Today

Nio was just one of many companies that saw their shares hit hard in early trading on Monday. Traders and investors are concerned about higher interest rates, which now seem likely amid the highest inflation in years. The U.S. Federal Reserve will begin a two-day meeting on Tuesday that could end with a signal that rates will begin rising as soon as March. 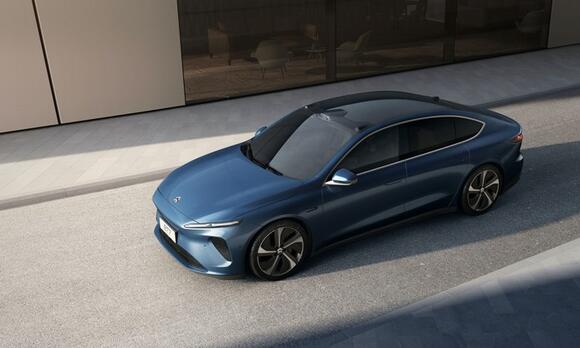 Nio confirmed recently that it's on track to launch its next new product, the ET7 sedan, in March. Two more new Nio models are expected before the end of 2022. Image source: Nio.

To be clear, there was no negative company-specific news driving Nio's shares lower on Monday. In fact, the company got some praise from analysts at Chinese investment bank Guosheng Securities, which initiated coverage of Nio with a buy rating and a price target of $50.

Analysts Xia Jun, Xia Tian, and Liu Lan noted that "new energy vehicles," a commonly used category in China that includes plug-in hybrids and pure electric vehicles, exceeded 20% of new-car sales in China in December and are expected to make up 40% of passenger-vehicle sales in the country by 2025.

The analysts believe that Nio has already established a "strong foothold" in the upscale EV market, which leaves it well positioned to ride that rising wave of adoption. They expect Nio to be delivering roughly 500,000 vehicles a year by 2025, up from 91,429 in 2021.

I concur with the Guosheng team: With three new models expected in 2022, and the company moving ahead quickly with more advanced driver-assist features, Nio's sales seem likely to gain significant upward momentum as the year unfolds. The stock may be surfing rough waters right now, but the long-term bull case for the company appears to be intact.

Electric-vehicle investors can look forward to a more detailed update when Nio reports its fourth-quarter and full-year 2021 results, likely in the second half of February.

This 5%-yielding bank has exposure to emerging markets layered on a strong core in a safe country.
STOCKS・1 DAY AGO

A top US official in the Pacific has warned that America would have to “respond” if the Solomon Islands allows China to establish a military base there.Following a “constructive and candid” 90-minute meeting with prime minister Manasseh Sogavare, ambassador Daniel Kritenbrink said that the security deals between China and the Solomon Islands present “potential regional security implications” for the US and other allies.“We wanted to outline for our friends in the Solomons what our concerns are,” Mr Kritenbrink, US assistant secretary for East Asian and Pacific Affairs, told reporters.“We have respect for the Solomon Islands’ sovereignty. But we also...
FOREIGN POLICY・26 DAYS AGO
dailyhodl.com

Silk Road founder Ross Ulbricht is forfeiting billions of dollars worth of Bitcoin (BTC) and other crypto assets to the US government. According to a new court filing, Ulbricht will relinquish any claim to over 69,000 BTC and undisclosed amounts of Bitcoin Gold (BTG), Bitcoin SV (BSV) and Bitcoin Cash (BCH) worth a combined $3 billion as part of a settlement.
PUBLIC SAFETY・26 DAYS AGO
ohmymag.co.uk

Blackout and crisis preparedness expert Herbert Saurugg has recently warned against the complete power grid blackout that could plunge entire Europe into darkness. He predicts a widespread blackout could be lurking in the not too distant future and such an event can cause extremely chaotic conditions worldwide. However, those who are prepared for an emergency can definitely bridge the difficult days well.
ENERGY INDUSTRY・26 DAYS AGO
The Motley Fool

You could make even more with several of the stocks continuing to soar this year.
STOCKS・1 DAY AGO

This business should benefit as cryptocurrency adoption accelerates.
STOCKS・2 DAYS AGO
Business Insider

Berkshire Hathaway made several new stock purchases, but this one is particularly interesting.
STOCKS・3 DAYS AGO
Fortune

Sign up for the Fortune Features email list so you don’t miss our biggest features, exclusive interviews, and investigations. Shanghai’s 25 million residents have endured an extreme COVID lockdown for nearly a month—and now a new nightmarish topic is trending on Weibo, the country’s Twitter-like social media platform.
PUBLIC HEALTH・26 DAYS AGO
The Motley Fool

The start of a new bull market in the technology sector is a matter of when, not if.
STOCKS・2 DAYS AGO