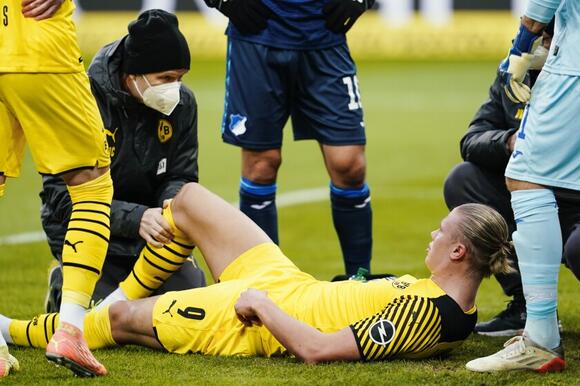 Borussia Dortmund’s top-scorer Erling Haaland has been forced to take another break due to what the club says are “muscular problems.”

Haaland had to go off in the 63rd minute of Dortmund’s 3-2 win at Hoffenheim on Saturday with what appeared to be a groin injury. Earlier in the game, the 21-year-old Norwegian received treatment for a problem with his right knee before continuing. He underwent medical examinations on Sunday and Monday.

“Haaland is suffering from muscular problems, which require treatment and further examinations in the coming days,” Dortmund said on its website Monday.

It’s the third time this season Haaland has been forced out with reported muscle problems. He missed three games between the end of September and mid-October due to a problem with his hip and another seven matches from the end of October to the end of November.

He has still managed 16 goals in 14 Bundesliga appearances this season.

Dortmund did not say how long the forward will be sidelined.

“We wish Erling that he is fit as soon as possible and back doing what he loves most – scoring goals for Dortmund,” the club said.

Dortmund is second in the Bundesliga, six points behind Bayern Munich after 20 games played.

Medvedev loses to Gasquet in Geneva in return from injury