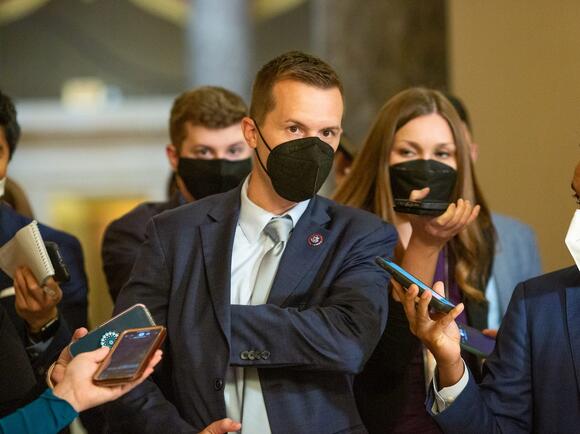 Twenty-seven House members have signed onto a letter drafted by Democratic Rep. Jared Golden of Maine calling for House leadership to "swiftly" bring forward legislation to ban members of Congress from owning or trading stocks.

"This glaring problem will not go away until it is fixed and Congress should not delay when we have the power to fix it," read the letter, which was addressed to both House Speaker Nancy Pelosi and House Minority Leader Kevin McCarthy.

"Perhaps this means some of our colleagues will miss out on lucrative investment opportunities," it added later. "We don't care. We came to Congress to serve our country, not turn a quick buck."

The letter was signed by two Republicans — Reps. Brian Fitzpatrick of Pennsylvania and Matt Gaetz of Florida — and 25 Democrats varying from progressives like Rep. Rashida Tlaib of Michigan to front-line members like Rep. Susan Wild of Pennsylvania.

Also signing it was Rep. Tom Malinowski , a Democrat of New Jersey who Insider in March revealed had violated the federal Stop Trading on Congressional Knowledge Act by failing to disclose dozens of stock trades together worth at least $671,000. Malinowski, whom the Committee on House Ethics is investigating in the matter , has since placed his stock assets in a qualified blind trust and cosponsored bills that would ban members of Congress from trading stocks.

Golden's letter implicitly references Insider's Conflicted Congress investigation , which has found that dozens of members of Congress and nearly 200 senior congressional staffers have failed to comply with the STOCK Act, a 2012 law designed to combat insider trading by requiring timely disclosure of stock transactions.

In an interview with Insider, Golden described the letter as an effort to further pressure leadership to act, building on existing momentum driven by a spate of new proposals to ban stock trading by lawmakers and backlash to Pelosi's dismissal of the idea last month .

"While this is still something that people are really talking about, we want to make sure that we're pushing for legislative action," Golden said.

According to the letter's signatories, the existing disclosure-based approach to ethics in Congress has not been sufficient in preventing improper behavior, including a spate of pandemic-related stock-trading scandals by several senators in 2020.

That episode "demonstrates how shamefully narrow the current law is," the letter said, adding that while insider trading is already explicitly illegal, "it can be nearly impossible to determine what counts as 'nonpublic knowledge' or how personally involved members are in their stock trades."

While Golden's letter explicitly mentions two long-standing bills that have seen growing numbers of cosponsors in recent weeks — the Ban Conflicted Trading Act and the TRUST in Congress Act — lawmakers have put several other versions of the idea forward. Just on Friday, Republican Rep. Vicky Hartzler of Missouri announced that she was introducing a House companion to a stock-trading ban put forward by Sen. Josh Hawley of Missouri earlier this month.

But lawmakers must still iron out the details of any proposal — including whether family members and senior staffers are included in any ban — and contend with the relative hesitance with which Democratic leaders are approaching the idea.

'I do come down always in favor of trusting our members'

Facing pressure from both the left and the right , Pelosi reversed course last week and said she would be open to banning stock trading by lawmakers if her caucus is on board. "If members want to do that, I'm OK with that," she said at a news conference on Thursday in response to a question from Insider.

Pelosi has asked the Committee on House Administration to review STOCK Act compliance and to consider imposing harsher penalties for failures to comply. The standard penalty for a disclosure violation now is just $200, and enforcement is often inconsistent . "I don't know why people don't do it on time, but whatever it is, if there's a penalty, and it should be more severe, so be it," Pelosi said, referring to timely disclosures.

She also said she wants to see any new disclosure rules applied broadly, including to Supreme Court justices .

"I do come down always in favor of trusting our members," Pelosi said Thursday. "To give a blanket attitude of 'we can't do this, and we can't do that' because we can't be trusted — I just don't buy into that."

Asked about Pelosi's apparent confidence in the current system, Golden quipped that "one might describe her approach as trust but verify."

"One of the most formative periods of my life was my four years of active-duty service in the United States Marine Corps," Golden said, explaining that while the institution places "a lot of trust" in each Marine, certain rules and norms remained in place to keep everyone honest. "Even good people sometimes find themselves making bad decisions, or being sloppy," he said.

With eyes now on the Committee on House Administration, Golden said that certain differences between existing proposals — including whether to use a blind-trust mechanism and include family members and staffers — can be taken on during the markup and amendment processes. Golden says he supports making the requirements broadly applied. "Similar to my time in the military, we always said the whole family serves, and that should be true of members of Congress," he said.

And Golden says he's confident that a stock-trading ban for lawmakers is within reach, given the idea's support among some congressional Republicans and its broad popularity with the public.

"My guess is if something like this were put to a vote, it would pass," he said. "I'd love to hear people's explanation about their opposition."

They need to launch an investigation on which stocks they purchased such as relating to the current virus-vaccines-masks-disinfecting products.

to all of the legislators who brought this forward, "kudos!" politicians who become millionaires in office are either working too hard at their private business, which means they're not working hard enough at public affairs, or are using their position to enrich themselves, neither of which is acceptable and grounds for impeachment.

Lockheed Martin's political action committee spent more than $250,000 in April donating to the campaigns of members of Congress and other political committees, new records show.
CONGRESS & COURTS・1 DAY AGO
WashingtonExaminer

The poll also found that 44% of Republic voters want congressional candidates to focus on the 2020 presidential election.
PRESIDENTIAL ELECTION・1 DAY AGO
Business Insider

"It's like the disinformation board on steroids. Another way to look at is the Patriot Act for American citizens," Sen. Josh Hawley said.
BUFFALO, NY・3 DAYS AGO

"Inevitably when there's a murder of this kind, you see politicians try to politicize it," Cruz said after a mass shooting in Uvalde, Texas.
TEXAS STATE・10 HOURS AGO
Business Insider

In the latest set of text messages between the Fox News host and Trump's former chief of staff, Meadows told Hannity to "Stress every vote matters."
PRESIDENTIAL ELECTION・29 DAYS AGO
Newsweek

Federal prosecutors have alleged that Owens and his son, Grady, assaulted officers during the January 6, 2021 insurrection.
WASHINGTON, DC・1 DAY AGO

"I'm very excited to finally tell my story," Kellyanne Conway said Monday during an interview with PEOPLE before the release of her memoir, Here's the Deal, out now. That story begins in a small town in southern New Jersey and follows Conway to Washington D.C., where a hard-earned career as a pollster and political consultant led to historic achievement as the first woman to run a successful presidential campaign when she helped elect Donald Trump in 2016 and served in his White House as senior counselor to the president.
RELATIONSHIPS・1 DAY AGO
Fortune

Sign up for the Fortune Features email list so you don’t miss our biggest features, exclusive interviews, and investigations. Reports that Twitter’s board could come to a deal with Elon Musk as early as Monday are raising red flags among media watchdog groups. On Monday, Media Matters, a...
PRESIDENTIAL ELECTION・29 DAYS AGO
Business Insider