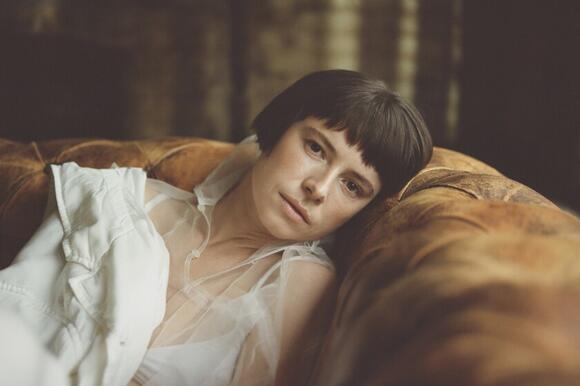 Irish actress Jessie Buckley stars in Maggie Gyllenhaal’s "The Lost Daughter," an adaptation of the Elena Ferrante novel of the same name and a potent psychological drama. Buckley co-stars as Leda, a frustrated, overwrought young mother of two little girls who yearns for an unfettered life in her job as an academic. (Olivia Colman plays the older Leda on holiday in Greece). Buckley is the kind of actress who consistently leavens a role with dopamine-like hits of originality, and her portrayal here is no different.

“Maggie is after the truth and never asked me to be smaller or objectified me in any way,” Buckley says of the first-time director. “Some of the stuff Leda was looking for and hungry for, a lesser director would have told you to do it a certain way. Maggie never did that; she encouraged you all the time.”

The actress is on a walk in London when The Envelope catches up with her, Irish conviviality in hand.

This is Maggie Gyllenhaal’s directorial debut. Had you met her before?

I was in New York with some girlfriends one summer and we spotted Maggie, and my girlfriends were, "Maggie Gyllenhaal!" A huge woman crush, as she’s such a kick-ass woman and brilliant in every way. After I read the script, we had a lovely chat. I was literally going to text Maggie [afterward], "Look, I really want to do this," and on that same night, she texted me: “How would you like to be my young Leda?”

You shared the character with Olivia Colman, you as young Leda and she the older. How did you handle that kind of split?

Maggie was very clear she didn’t want us to communicate; it could have been oppressive for the character. Also, I don’t think it was important. It was the same woman at different chapters of her life and was something to use versus pulling inward.

The only conversation we had about what we should do together was the accent, really. I shot first; I was kind of in my own small little independent movie in my own world and then she arrived after. I’d known Olivia a bit as a friend before, but I think it’s a testament to the script: The character is so rich, it transverses people and transient time. And Maggie said, "I’m not going to ask the audience to believe these two actresses are the same person. Lead with your imagination and see what you find from yourself emotionally," which is what we did.

Whenever I see you with the other women in the film doing publicity — Maggie, Olivia, Dakota Johnson — it seems like you all get on like a ball of fire.

I grew up a lot on the set because of the women on it. There was a kind of an emboldening feeling between us: Let’s not apologize for all of us, the chaos, the beauty, the sexuality, the emptiness, the yearning and the light of us all. It was simply: Let’s go for it. It was the story we were in but also because Maggie held that space and really dared us to jump across the cliff.

I’m sure many people judge the young Leda as a bad or selfish mother.

That’s not what I felt about her. If anything, it opened a question to me, as a woman, about what things we impose on mothers to be the "good mother." What does a "good mother" actually mean? Does being a good mother genuinely mean you cut your own life off? Or does a good mother go, "I really need a life. I can’t show my daughters as a woman that you have to switch yourself off when you become a mother or wife." It’s not just men who do that [to women], women do it, too. We do it to ourselves. I guess it’s changing the frame.

Also, everybody has their own right to their judgment of this story. I wouldn’t ask anyone to think about it any other way than how they feel about it. That’s the gift of a story: It can mean a million things to a million different people.

We rely on you in a way to raise those issues, to show us ourselves — it is part of the artist’s role, shining a light and explaining humanity back to itself.

Yes. We all are fallible, we all are chaotic. If we weren’t, it’d be pretty boring. I don’t think we’d really be living. We all have the capability of doing really beautiful things and really horrible things. That’s the dance you get to play, the struggle and the pain. It’s inevitable for everyone. And the joy of what I do.

Princess Eugenie has taken to her Instagram Stories to make an exciting announcement related to The Anti-Slavery Collective, which she co-founded with her best friend Julia de Boinville back in 2017. Resharing a message from the charity organisation, the mother-of-one revealed she was posting "news from my charity". WATCH: Princess...
CELEBRITIES・26 DAYS AGO
Hello Magazine

Gwyneth Paltrow is a doting mom to two teenage children, Apple and Moses, who she shares with ex-husband Chris Martin. The family are notoriously private, but over the weekend the award-winning actress gave a rare insight into their upcoming plans - and how they are changing things up this year for Mother's Day.
FAMILY RELATIONSHIPS・26 DAYS AGO
Us Weekly

Putting it all out there. Viola Davis doesn’t have time for critics — especially when it comes to her portrayal of Michelle Obama on Showtime’s The First Lady. The 56-year-old actress told BBC News in an interview published on Monday, April 25, that it is "incredibly hurtful when people say negative things about your work." […]
CELEBRITIES・26 DAYS AGO

Netflix has canceled another one of its major shows, with this one getting the ax after only two seasons. Variety reports that hit sci-fi drama Raising Dion has been dropped by the streamer, following its recent season debut. The news seems to have been revealed by series star Sammi Haney, who shared the news with fans on Instagram. "Sad to say that Raising Dion is CANCELED [sic] Thank you for all of the amazing support we got from all of our wonderful fans!" Haney wrote, in part. "Season 2 was a success, equal to Season 1, even if just looking at how many people watched all of it and wanted a season 3!"
TV SERIES・26 DAYS AGO
ComicBook

After weeks of silence, Chris Rock has finally addressed his now-infamous incident with Will Smith at March's 94th Annual Academy Awards. During another sold-out show at Baltimore's Lyric Performing Arts Center on Friday, Rock directly referenced the slap, but only spent a second on it before moving on with his set.
BALTIMORE, MD・28 DAYS AGO
Hello Magazine

Kate Hudson has realized one of her dreams and has taken to Instagram to share the incredible news with her 15 million followers. Sharing two pictures of her looking casual in a pair of baggy dip-dyed trousers and a white tank top, and singing into a microphone, the actress announced a surprising career change.
CELEBRITIES・27 DAYS AGO
People

Paulina Gretzky walked down the aisle in Vera Wang!. The bride shimmered during her wedding with pro golfer Dustin Johnson on Saturday at Tennessee's Blackberry Farm. Gretzky showed off the stunning look on Instagram Monday in a photo of the newlyweds kissing. "4/23/22♥," she simply captioned the post. For...
BEAUTY & FASHION・26 DAYS AGO

Helen Skelton has revealed that she has separated from her husband, rugby player Richie Myler.The Countryfile host announced the news in an Instagram statement, writing that Myler has “left the family home”.Skelton’s announcement comes just four months after they welcomed their third child.“Very sad to say that Richie and I are no longer a couple,” she wrote. “He has left the family home. We will be doing our best to co parent our small children.”Skelton, who married Myler in 2013, accompanied the post with two broken heart emojis.The pair have three childen together: Ernie, aged six, Louis, aged...
CELEBRITIES・26 DAYS AGO
Hello Magazine

Sharon Osbourne opened up about everything from her family life to her health in a tell-all interview over the weekend. And during the chat, the TV favorite spoke out about her devastating battle with bulimia, which she has been living with for many years. Talking to The Times, she told...
CELEBRITIES・26 DAYS AGO
Los Angeles Times

'Would you be flattered if someone played you and misrepresented you?' Angelyne said when asked about Emmy Rossum's small-screen portrayal of her.
LOS ANGELES, CA・2 DAYS AGO
Los Angeles Times

Rosmarie Trapp, whose Austrian family was the inspiration for the musical and classic movie 'The Sound of Music,' has died.
LOS ANGELES, CA・2 DAYS AGO

LOS ANGELES, May 23 (UPI) -- Stranger Things was about to film Season 4 when it had to shut down for the COVID-19 pandemic. Two years later, the season, premiering Friday on Netflix, bears the maturity of growing up during a crisis. Avoiding spoilers, suffice it to say it is...
LOS ANGELES, CA・22 MINUTES AGO