Goldman Sachs (NYSE: GS) saw its stock price tumble 8% on Jan. 18 after the release of fourth-quarter earnings that showed the investment bank had lower earnings and missed analysts' estimates.

For investors, this is an opportune time to buy this stock and add a great company to your portfolio while it's wildly undervalued. Here's why. 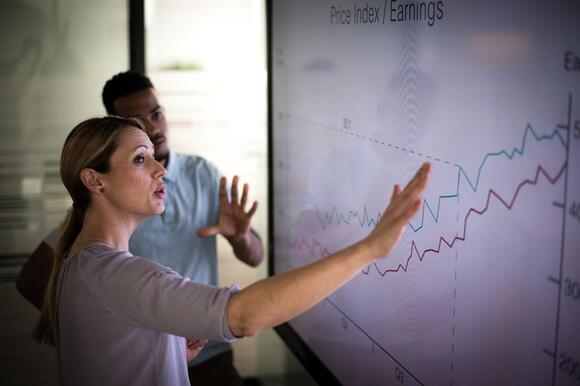 Goldman Sachs' stock price is down about 8% year to date as of Jan. 20, and pretty much all of that dip came after its fourth-quarter earnings report. The bank missed analysts' estimates for the first time in seven quarters, with earnings per share (EPS) at $10.81, below the consensus estimate of $11.77. Earnings were down 11% year over year.

Expenses, which were the culprit for lower earnings, shot up 23% year over year to $7.3 billion. The biggest line item, compensation and benefits, was up 31% year over year to $3.2 billion. Part of it is due to new hires to account for growth and playing catch-up from trying to hold the line in 2020 during the recession. But the bigger issue was wage inflation, as CEO David Solomon explained on the fourth-quarter earnings call.

"Where the component of that is most evident is that there is real wage inflation everywhere in the economy, everywhere," Solomon said.

He added: "Coming out of last year after we went through the compensation process, there were definitely places where I think with hindsight and with the constantly evolving environment of COVID and supply chain changes, the monetary and fiscal policy environment, what that did to savings rates, etc., where there was a real base pressure on what I'd call base compensation and wage levels. And so that's a component of it, for sure."

Operating expenses were higher for the full year, too, up 10% to $31.9 billion, with compensation and benefits representing a 33% increase to $17.7 billion.

But revenue-wise, 2021 was a record year. Goldman Sachs generated $59.3 billion, up 33% from 2020. The investment banking business led the way, with record revenue of $14.9 billion, up 58% from the previous year. The company was No. 1 in mergers and acquisitions (M&A), initial public offerings, and equity underwriting. Asset management and consumer and wealth management also had record revenue, with global markets having its best year in 12 years. Net earnings were also a record, up 137% in 2021 to $21.1 billion.

The recent price swoon presents a good opportunity for investors. Trading at around $356 per share, Goldman Sachs is down over 8% in 2022, and since the beginning of November 2021, it's down about 16%. It is trading at six times earnings, which is extremely low for a company with the earnings power of Goldman Sachs. This is the largest investment bank and one of the largest institutional trading/global markets firms, and it's not going anywhere.

We think there's a good tailwind for continued M&A activity. And the uncertainty in the environment interestingly is actually helping that tailwind because it's forcing people to look hard at ways they can strengthen their competitive position. And so I think we have a big reset going on coming out of COVID around supply chains, the way businesses are positioned, and I think that's going to create a significant amount of client activity.

In addition, Goldman Sachs has worked hard to diversify its revenue stream by bulking up its consumer banking/wealth management and asset management businesses. Both of these businesses could benefit in a rising-rate environment.

Goldman Sachs comes into 2022 with strong financials, including a 20% higher book value than a year ago, and an efficiency ratio that's down to 53.8%, from 65% at the end of 2020, even with the expense increases. Its return on equity is 23%, the highest since 2007, and its operating margin is 45.8% -- both good indicators of management effectiveness.

The company might not match the record revenue and earnings it generated in 2021, but it remains well-positioned for continued long-term growth and is wildly undervalued right now.

10 stocks we like better than Goldman Sachs
When our award-winning analyst team has a stock tip, it can pay to listen. After all, the newsletter they have run for over a decade, Motley Fool Stock Advisor , has tripled the market.*

They just revealed what they believe are the ten best stocks for investors to buy right now... and Goldman Sachs wasn't one of them! That's right -- they think these 10 stocks are even better buys.

These exceptional companies are on sale and can remain in your portfolio forever.
STOCKS・7 DAYS AGO
The Motley Fool

The discount retailer provided its first-quarter earnings and an update for the year, and Wall Street didn't like what it saw.
STOCKS・2 DAYS AGO
Motley Fool

Although stock market corrections can be scary, they're a great time to put your money to work. These three stocks are genius buys for growth, value, and income investors. You’re reading a free article with opinions that may differ from The Motley Fool’s Premium Investing Services. Become a Motley Fool member today to get instant access to our top analyst recommendations, in-depth research, investing resources, and more. Learn More.
STOCKS・17 DAYS AGO
The Motley Fool

These stocks have been heavily sold off, but their long-term prospects are fantastic.
STOCKS・5 DAYS AGO

These stocks offer a reasonable valuation and positive returns in a challenging market.
STOCKS・4 DAYS AGO
Motley Fool

To be a successful investor, you must think independently of the herd mentality on Wall Street. These two stocks are worth far more than what they are trading for today. You’re reading a free article with opinions that may differ from The Motley Fool’s Premium Investing Services. Become a Motley Fool member today to get instant access to our top analyst recommendations, in-depth research, investing resources, and more. Learn More.
STOCKS・7 DAYS AGO
The Motley Fool

This healthcare stock looks like a bargain today.
STOCKS・1 DAY AGO

When Will Stock Prices Recover? 3 Things to Know

The stock market's slump continues. How long will it last?
STOCKS・9 DAYS AGO
Business Insider

MercadoLibre and PubMatic are trading at downright cheap prices, and investors should capitalize on these deals.
STOCKS・8 DAYS AGO
The Motley Fool

Go off the beaten path to increase your dividend income with these three names.
STOCKS・4 DAYS AGO
The Motley Fool

Buying these stocks on the dip could result in big returns for investors.
STOCKS・6 DAYS AGO
The Motley Fool

Aside from its market-beating payout and track record as a Dividend King, there are other reasons to like Genuine Parts.
STOCKS・4 DAYS AGO