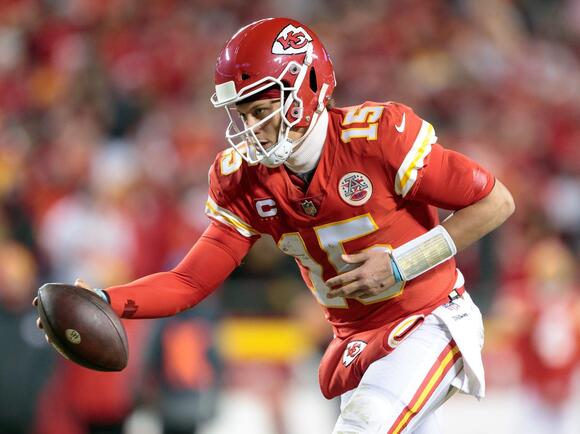 In a thrilling divisional match up already being labelled as one of the best playoff games ever, Mahomes threw three touchdowns as the Chiefs beat the Buffalo Bills 42-36 to reach a fourth straight AFC Championship Game.

The game ebbed and flowed throughout, with both teams matching each other blow-for-blow pretty much straight from the first whistle.

With just 13 seconds left in fourth quarter the Bills took a three-point lead over the Chiefs, and looked to have secured an AFC Championship berth.

But the Chiefs drove back. Squeezing in two passing plays, Mahomes connected with wide receiver Tyreek Hill and tight end Travis Kelce on consecutive throws, getting within field goal range. Kicker Harrison Butker slotted a 49-yard attempt to tie the game and send it to overtime.

Ahead of overtime, the Chiefs won the coin toss and opted to start with the ball. On the opening drive of added time, Mahomes found Kelce in the end zone to score the game-winning touchdown, thus denying Bills' quarterback Josh Allen the chance to reply.

The NFL's overtime rules state that "each team must possess, or have the opportunity to possess, the ball" unless the the team that wins the coin toss "first scores a touchdown on the opening possession."

Since the Chiefs' Sunday win, that rule has been under fresh scrutiny, as noted by Insider's Scott Davis.

Mahomes has been in Josh Allen's shoes before, and was sympathetic of his opponent's plight.

In the 2018/19 season's AFC Championship Game, New England Patriots QB Tom Brady threw a game-winning touchdown on the opening possession of overtime, meaning Mahomes never got a chance to touch the ball in the extra period.

Speaking to reporters after Sunday's victory, Mahomes said he felt for Allen and the Bills.

"It worked out well for us this time, but sometimes whenever you got two teams going back and forth like you're going, it kind of stinks that you don't get to see the other guy go," he said.

"I'll take the win this time. Obviously it hurt me last time. All you can do is play the rules the way the rules are explained. That's what we did today."

Bills coach Sean McDermott said he was "devastated" by the manner of the loss, but Allen, who threw for four touchdowns on the night, refused to bemoan the rules.

"They made some good plays there at the end, and unfortunately the coin toss went the way it went," he said.

"The rules are what they are, and I can't complain about that. Because if it was the other way around, we'd be celebrating, too. So, it is what it is at this point. And we just didn't make enough plays tonight.

"We've just got to use this as fuel. Fuel for the fire."

The Chiefs face the Cincinnati Bengals in the AFC Championship Game on January 30.

The winner will then face whoever wins the NFC Championship game between the Los Angeles Rams and the San Francisco 49ers at Super Bowl LVI on February 13.

He is a class act. Hope he continues to be an example kids look up to. What a great game with two great quarterbacks.

This Game Goes Down in HISTORY for me, I'll never forget this one right here....wow great game two great teams played their hearts out....l luv it....CHIEFS FAN BUT MUCH RESPECT TO THEM BILLS♥️💛♥️💛

That was a fabulous game. Both these awesome young quarterbacks did a fantastic job. I agree with mahomes they should do overtime like college. Each team get a chance. Maybe they will change it. It shouldn’t be up to the coin toss