At times, the markets can be quite stressful. Stocks can sell off for no reason other than broad-based volatility and macroeconomic factors like interest rates and inflation. While both those numbers are important for businesses and their profit potential, short-term emotional swings can provide investors with an extended time horizon -- an opportunity to buy stocks they like at a discount. This seems to be happening, especially with technology stocks, this month.

Autodesk (NASDAQ: ADSK) , Adobe (NASDAQ: ADBE) , and Alphabet (NASDAQ: GOOG) (NASDAQ: GOOGL) are three tech stocks that fit this bill. Each business has attractive unit economics, provides incredible value to its customer base, and has sold off to start 2022. 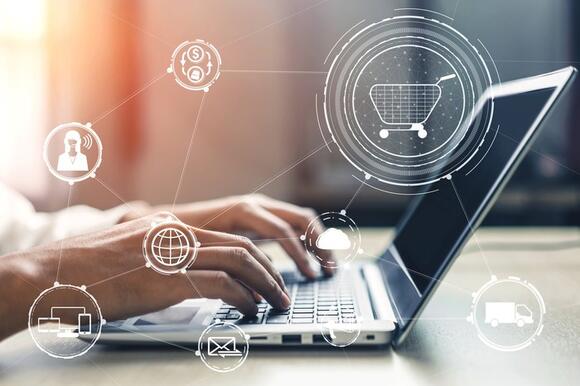 Autodesk sells software programs to architects, engineers, construction workers, and industrial workers, among other industries. Its core products are AutoCAD (its first product, started in 1982) and Revit, which both serve the architectural, design, and construction industries.

Revit was purchased by Autodesk in 2002 for $133 million in cash and has grown rapidly ever since. It is the most popular software program for designing buildings that follow Building Information Modeling (BIM) standards. BIM, at its most basic, means a 3D digital representation of a physical building, and it is slowly becoming the standard for the architectural and construction industry globally. Analysts expect the BIM industry to grow 3.7% annually through 2028. Given Revit's importance to the BIM industry, it should be able to ride this wave and grow its sales and profits at or above the industry average.

Outside of Revit and AutoCAD, Autodesk has made big investments in its Fusion 360 platform (mechanical and manufacturing design), the Autodesk Construction Cloud (workflow tools for on-site teams), and Maya (3D animation software). These products are not as important as AutoCAD and Revit right now, but provide lots of optionality for Autodesk to grow in the future. For example, over the last three years, Fusion 360 has increased its billings at a compound annual growth rate (CAGR) of 107%. If this continues, it will become a major part of the Autodesk growth story shortly.

Looking at its financials, Autodesk has been able to grow its annual revenue at an impressive rate since going public over three decades ago. Trailing-12-month revenue is up over 40,000% since its initial public offering, which has come from the continued digitizations of the industries it serves plus numerous acquisitions over the years (like Revit). This growth should continue, and has enabled Autodesk to become incredibly profitable at the same time.

In fiscal year 2023 (calendar year 2022), Autodesk expects to generate $2.4 billion in free cash flow (FCF) . With its current market cap of $56 billion, that gives the stock a forward price-to-free-cash-flow (P/FCF) ratio of 23 if it can hit its fiscal year 2023 target. In my book, this makes Autodesk a quality business trading at a discounted valuation.

Adobe is a similar business to Autodesk, as it is a collection of software programs. However, instead of serving the design, construction, and engineering industries, Adobe sells software programs for digital creators and simple business needs. It separates its business units into three categories: the Adobe Creative Cloud, Adobe Document Cloud, and Adobe Experience Cloud. All programs are sold as software-as-a-service (SaaS) subscriptions.

The Adobe Creative Cloud includes programs like Photoshop, Audition, and Illustrator. Each program serves a specific purpose, but they are all tailored to helping individuals and businesses create digital products. The Document Cloud includes things like PDFs (one of Adobe's oldest products) and digital signatures, and are sold to small businesses to help them save time and money in creating and sending documents. Lastly, the Experience Cloud is for marketing automation, analytics, and broader business goals.

All these products have steady and growing demand, which has helped Adobe grow its profits and cash flow over the last decade. Over the last 12 months, Adobe has generated $6.9 billion in FCF, which is up from only around $1 billion in 2014. With a market cap of $250 billion, the stock trades at a P/FCF of 36. If you believe in the continued growth of Adobe's three main product categories, its annual cash generation should continue to march higher over the next decade, providing an opportunity for investors to buy the stock at a somewhat reasonable valuation.

We've likely all used Alphabet's products at some point in our lives, probably multiple times every day at this point. The company owns and operates Google, YouTube, Google Cloud (GCP), Waze, Fitbit, and many other companies. From an investment perspective, the most important are Google Search/Maps, YouTube, and GCP. The other business units are either small or more speculative and should be treated as icing on the cake of this investment.

I bring up the discrepancy in segment profitability because it highlights how cheap Alphabet stock is right now. GCP, which is a competitor to Amazon 's AWS, should achieve north of 20% operating margins (AWS has 30% margins) once it matures. The Other Bets are less easy to predict, but it is unlikely the company will burn over $1 billion a quarter and achieve no profits indefinitely. This means that even if overall organic revenue growth for Alphabet slows down this decade (which is likely to occur because of how large its revenue base is), its profits and cash flow should grow at a higher rate once these non-Google Services segments mature. 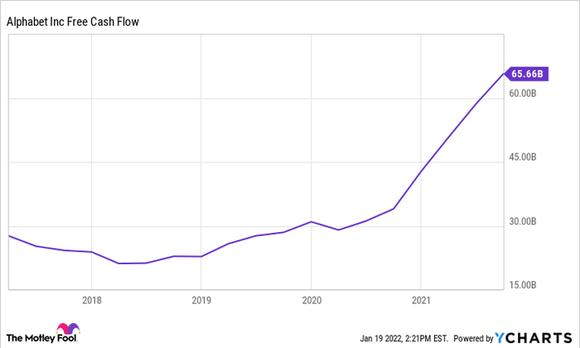 You can see it in Alphabet's FCF chart. Over the last few years, the company's annual FCF generation has moved higher, hitting $65.7 billion in the last 12 months alone. With the steady growth of Google Services and operating leverage at GCP, $100 billion in annual FCF within a few years is not out of the question.

With a market cap of $1.8 trillion, Alphabet stock trades at a P/FCF of 28.5. If you believe FCF will continue to inflect in the coming years, right now looks like a great time to buy Alphabet stock at a reasonable valuation.

10 stocks we like better than Alphabet (C shares)
When our award-winning analyst team has a stock tip, it can pay to listen. After all, the newsletter they have run for over a decade, Motley Fool Stock Advisor , has tripled the market.*

They just revealed what they believe are the ten best stocks for investors to buy right now... and Alphabet (C shares) wasn't one of them! That's right -- they think these 10 stocks are even better buys.

This 5%-yielding bank has exposure to emerging markets layered on a strong core in a safe country.
STOCKS・1 DAY AGO
electrek.co

The stock price has dropped 30% year to date.
STOCKS・1 DAY AGO

This healthcare stock looks like a bargain today.
STOCKS・13 HOURS AGO
The Motley Fool

You could make even more with several of the stocks continuing to soar this year.
STOCKS・14 HOURS AGO
The Motley Fool

Is Now a Good Time To Buy Stocks?

To paraphrase Warren Buffett, some of the best returns can come from buying when feeling overwhelmed by portfolio declines.
STOCKS・12 HOURS AGO
The Motley Fool

Three companies that can beat the market in the coming years.
STOCKS・1 DAY AGO
inputmag.com

Warren Buffett's approach could keep your money safer amid volatility.
STOCKS・1 DAY AGO
The Motley Fool

Strong price performance from these three large-cap tokens has investors excited about the near-term prospects of this sector.
STOCKS・1 DAY AGO