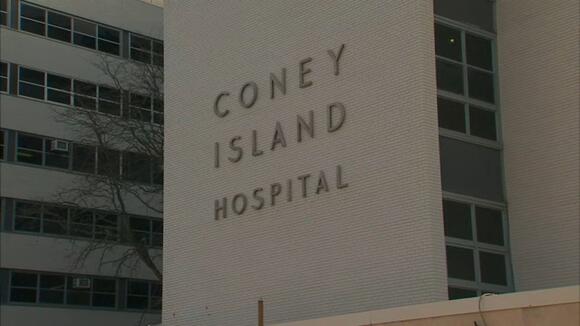 Federal help in the form of military doctors and nurses arrived at New York City Health + Hospitals Coney Island Monday to help with staffing shortages. Help also arrived at University Hospital in Newark over the weekend. It's all part of the Biden administration's effort to address the surge in hospitalizations due to omicron. Similar resources will be arriving at North Central Bronx Hospital on Friday. President Joe Biden announced plans earlier this month to send military medical teams to the New York and New Jersey area to help with the omicron surge. The president said he told the Defense Department to prepare 1,000 military doctors and nurses for assignments at hospitals around the country. White House officials say 3,000 military medical workers have been deployed across the country since July 1. New York and New Jersey are two of six states receiving additional military medical aid. Hospitals in Rhode Island, Ohio Michigan, and New Mexico will also receive help. Also beginning Monday are the additional resources announced by Governor Kathy Hochul. Thirty National Ambulance teams are moving to support upstate counties in need of help transporting patients. A new Disaster Medical Assistance and Military Medicine team of 19 medical professionals will replace the existing DMAT at SUNY Upstate on January 26. "I want to thank President Biden for honoring our request, and deploying much-needed medical teams to New York State to help us fight the winter surge," said Hochul last week. "These critical resources will build on our ongoing winter surge plan efforts to assist our overstressed hospitals so they can maintain patient care, and relieve some of our exhausted medical staff and emergency responders." Hochul reiterated the need for additional medical staff in upstate regions like the Finger Lakes where COVID cases have increased. ALSO READ | 5 tax changes that can boost your refund this year

It's almost time to file your federal tax return and there are a handful of changes you need to know about, including steps you need to take regarding child tax credit payments.

surge?? it's declining too late NYC. besides if they didn't fire thousands of care workers there wouldn't be a shortage..

Remember the hospital ship Trump brought into NYC at the start of Covid? They didn’t use it at all. This will be the same. More blustering to hype the narrative.

COVID isn't over. One example is the fact that some 20 New York City judges are now COVID positive after they attended a retreat in Montauk last weekend, according to published reports.
NEW YORK CITY, NY・1 DAY AGO
ABCNY

Mayor Eric Adams has said it makes no sense for the cameras to have limited hours when a majority of crashes happen late at night and early in the morning.
NEW YORK CITY, NY・20 HOURS AGO
ABCNY

Happy the elephant has lived at the Bronx Zoo for 45 years, but the New York State Court of Appeals will now decide if she is a person.
NEW YORK CITY, NY・1 DAY AGO
ABCNY

The CDC is investigating to see if they may be associated with the ongoing nationwide Acute Hepatitis in Children investigation.
KIDS・1 DAY AGO

While still not at pre-pandemic levels, subway ridership continues to set new high watermarks in the push to return to normalcy.
NEW YORK CITY, NY・1 DAY AGO
ABCNY

Gas in New York is quickly approaching an average of $5 per gallon, increasing again Thursday to $4.91.
NEW YORK CITY, NY・1 DAY AGO
ABCNY

President Joe Biden is helping baby formula manufacturers and major retailers with logistic support to get formula into the country, according to a White House official, and also attempting to identify areas where communities may be at "critically low supply."
SUFFOLK COUNTY, NY・3 DAYS AGO

How much are your taxes? Check out our Long Island school tax database

Long Islanders went to the polls this week to vote on their school district budgets for the 2022-2023 school year.
PERSONAL FINANCE・21 HOURS AGO
ABCNY

May is Skin Cancer Awareness Month, and with summer right around the corner, it's a good reminder to check -- and protect -- your skin, especially for those who are at high risk for melanomas.
SUFFOLK COUNTY, NY・3 DAYS AGO
ABCNY

The arrests were part of Operation Long Island Wave, and those arrested were wanted for offenses including homicide, attempted murder, narcotics, weapons offenses, robbery and assault.
LAW ENFORCEMENT・1 DAY AGO
ABCNY

This week's MTA heroes are the workers who are responsible for helping us all navigate the city's transit system.
NEW YORK CITY, NY・2 DAYS AGO

The Supreme Court is set to rule on a case that could transform the landscape of what guns are legally allowed to be carried in New York.
NEW YORK CITY, NY・4 DAYS AGO
ABCNY

For the second time this year, a Rockland County community has had to take action after a racist incident during a school sporting event.
PEARL RIVER, NY・1 DAY AGO
ABCNY

An on-duty EMT was released from the hospital after being shot in his shoulder while treating an allegedly drunk and disorderly patient inside his ambulance on Staten Island Wednesday night.
STATEN ISLAND, NY・1 DAY AGO
ABCNY

New York City is preparing to honor the late rapper Christopher Wallace, better known as Biggie Smalls and the Notorious B.I.G., who would have turned 50 on May 21.
BROOKLYN, NY・1 DAY AGO

Transport Workers Union Local 100 officials said bus operators are tired of being treated like punching bags, and they detailed the changes they want during the event outside the Kingsbridge Bus Depot in Inwood.
NEW YORK CITY, NY・2 DAYS AGO
ABCNY

It's been a devastating few months for one Westchester mom. First, she lost her daughter in a tragic fire. Then, she got a double gut punch when she says she couldn't get tens of thousands in retirement money her daughter earned.
NEW YORK CITY, NY・3 DAYS AGO
ABCNY

Watch the first episode of "Missing," ABC7's new series investigating cold cases of people who have vanished without a trace. This is the story of Leanne Marie Hausberg of Bensonhurst, a 14-year-old girl who went missing in 1999.
NEW YORK CITY, NY・4 DAYS AGO