The Rams and Sean McVay have a Kyle Shanahan problem; here's the head-to-head history 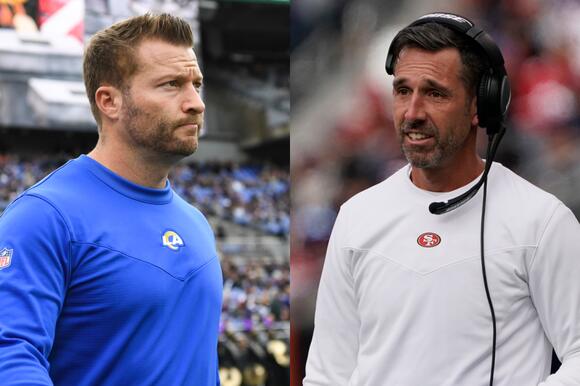 Somewhat amazingly, the Rams and the 49ers have faced each other only once in the postseason, a 30-3 San Francisco rout in 1990. It's an interesting bit of history that will have no bearing on Sunday's second postseason meeting involving the two teams.

Pretty similar, except that goose-egg-and-six record Sean McVay has against Shanahan since the start of the 2019 season (he is 3-7 overall against Shanahan). The following is a game-by-game look at those six matchups and what The Times had to write about them.

What happened: A year after the Rams dominated the NFC West and went to the Super Bowl , the Niners and their new head coach raced to an 8-0 start on the way to an appearance in Super Bowl LIV. The fifth of those eight victories was a San Francisco defensive clinic in which it held Rams quarterback Jared Goff to 78 yards in what would become a recurrent theme in the rivalry.

What The Times wrote: What’s garbage to the Rams is gallery-worthy to the San Francisco 49ers.

For the NFC’s only undefeated team, the stat sheet from Sunday’s 20-7 victory is suitable for framing.

Sure, there’s plenty of video to study from this game, but wouldn’t it be easier to look at the chalk outline?

In case there were lingering doubts about the legitimacy of their unblemished start, the 49ers made a convincing case Sunday with their most dominant outing since the glory days of Jim Harbaugh three coaches ago.

What happened: A Robbie Gould field goal as time expired eliminated the Rams from postseason contention for the first time in three years. Jared Goff was solid, throwing for 323 yards and two touchdowns as the Rams took a 21-10 first-half lead, but a last-minute first-half pick-six by the Niners' Fred Warner was a crucial mistake.

What The Times wrote: They flirted with what turned out to be the inevitable throughout the season.

The Rams got off to a strong if misleading start, suffered several blowout losses and spent two months teetering on the brink of elimination from playoff contention.

It all culminated Saturday night at Levi’s Stadium.

A 34-31 loss to the San Francisco 49ers ended the Rams’ chances to advance to the postseason for a third consecutive season under coach Sean McVay.

A year after playing in the Super Bowl, the Rams will be watching the playoffs, not participating in them.

“It’s over,” cornerback Nickell Robey-Coleman said. “The dance is done.”

What happened: Three Jimmy Garappolo touchdowns in the first half was the difference in a dominant two-way performance by the Niners, who six nights earlier had been humiliated at home by the Dolphins 43-17 and were facing a first-place 4-1 Rams squad. San Francisco's defense held Rams quarterback Jared Goff to 198 passing yards. Don't forget that number.

What The Times wrote: Imagine that. Six weeks into the regular season, and the only NFC West team people were shoveling dirt on was the San Francisco 49ers, a club that had a 10-point lead in the fourth quarter of the Super Bowl .

For too long, the 49ers’ tightest spiral was their downward one.

They reversed that in a big way Sunday night, showing an unexpected burst of intensity in a 24-16 victory over the Rams at Levi’s Stadium.

“We always have a pretty big sense of urgency, but I think when you get embarrassed like we did last week, you can find out a lot about your team,” said 49ers coach Kyle Shanahan, whose team was coming off a 43-17 home loss to Miami. “We came in on Monday and it was a hard day, but … I was very impressed by the character of our team.”

Shanahan said the season could have gone one of two ways after a humiliating loss like that.

“Guys either give in because it gets too hard, and they try to hide and point fingers,” he said. “Or guys try to step it up and get better.”

It’s clear which path the 49ers chose. The Rams, meanwhile, showed all the life of the cardboard cutouts in the stands.

What happened: The game would go down as the beginning of the end of the Jared Goff era in Southern California. A week earlier, Goff had outdueled Tom Brady, throwing for nearly 400 yards and three touchdowns in a 27-24 Rams victory. Against the Niners, Goff threw for fewer than 200 yards (198, in fact! See previous game) with no touchdowns and two interceptions, a performance that would prompt some stinging words from his coach afterward.

What The Times wrote: One night you beat the GOAT , and six days later you are the goat.

That was the week that was for Rams quarterback Jared Goff .

Last Monday night, he engineered a game-winning field-goal drive to defeat the Tampa Bay Buccaneers and Tom Brady, perhaps the greatest NFL quarterback of all time.

On Sunday, Goff was solely to blame for three of the Rams’ four turnovers in the Rams’ 23-20 defeat by the San Francisco 49ers at SoFi Stadium.

Coach Sean McVay typically spreads accountability for poor execution on himself and the offense as a collective unit.

But there was no talking around Goff’s errors Sunday.

“Our quarterback’s got to take better care of the football,” McVay said after the 49ers’ Robbie Gould kicked a 42-yard field goal as time expired to drop the Rams to 7-4.

What happened: Two weeks earlier, the Rams were 7-1. For the first time, marquee-name additions Odell Beckham Jr. and Von Miller were suiting up in a Rams' game together. And for the second straight week, the Rams were dominated in a nationally-televised game. Matthew Stafford was picked off twice, including a first-quarter pick-six by Jimmie Ward that gave the Niners a 14-0 lead. The loss was the Rams' most lopsided of the season.

What The Times Wrote: Receiver Odell Beckham Jr. was in the starting lineup. So was linebacker Von Miller.

The Rams’ two newest stars — on a team that is fairly bursting with them — made their debut Monday night.

Not against the San Francisco 49ers. Not with the Rams’ biggest star, quarterback Matthew Stafford, putting them in a hole for a second consecutive game.

And not with 49ers coach Kyle Shanahan once again outdueling protege Sean McVay.

All that buzz about the Rams?

It ended when they ran into an unexpected buzz saw.

The Rams and the 49ers played role reversal in the Rams’ 31-10 defeat at Levi’s Stadium.

What happened: With the NFL's second seed and two guaranteed postseason home games in their grasp, the Rams jumped out to a 17-0 lead before the offense sputtered and the Niners' dormant attack awakened. San Francisco would outgain L.A. 449-265, a disparity exceeded only by the sea of red that filled SoFi Stadium, a surprise cacophony that Rams quarterback Matthew Stafford would later say made it difficult to hear his own play calls.

What The Times wrote: The Rams won their five games before this. They still won their division.

So, why did it feel as if their 27-24 overtime loss to the San Francisco 49ers was less of a fluke and more of a forewarning of an impending catastrophe?

The Rams played their regular-season finale how they played the majority of this season, counting on their stars to make critical plays at critical times to compensate for the shortcomings of a disjointed roster.

Jalen Ramsey intercepted a pass intended for George Kittle to preserve a fourth-quarter stalemate. Matthew Stafford connected with Cooper Kupp to reclaim the lead on the next drive.

There were similarities between this game and some the Rams have won, which provided coach Sean McVay with adequate cover to be able to make the case the loss didn’t signal serious problems.

“If we make a couple of plays on the last drive, this is a totally different tenor and temperature of this conversation,” McVay said.