In January 2022, Social Security retirees are experiencing something that hasn't happened for four decades. It's a change to their checks that will affect every senior who's receiving income from the popular benefits program.

While at first it may seem like a good thing, the reality is the major milestone Social Security's hitting for the first time in decades actually isn't great for retirees. Here's what's happening to retirement benefits in January 2022. 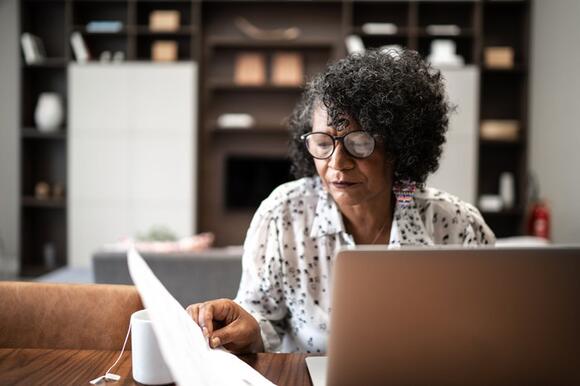 This big change to benefits is unprecedented in recent times

A benefits increase above 5.8% has not happened for a very long time. The last time seniors got a larger raise was back in 1982 when the annual cost-of-living adjustment (COLA) was 7.4%.

As the table below shows, the largest bump up in benefits since that time was 5.8%, and that raise occurred in January of 2009. In the recent decade, annual raises for retirees have been much lower, with retirees actually receiving $0 in extra money in three years out of the past 13. 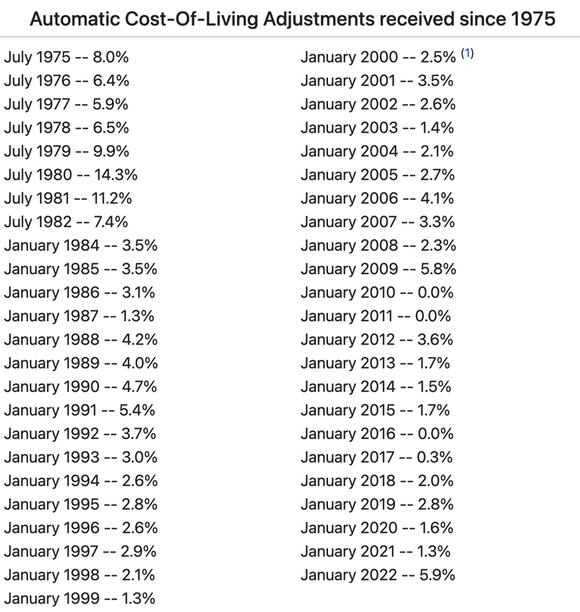 The biggest benefit increase in decades is good news -- right?

A more substantial Social Security raise than retirees have seen in decades seems like great news. The only problem is, cost-of-living adjustments that result in benefit increases aren't like typical raises employers may provide based on merit.

Instead, COLAs are determined based on a set formula designed to help retirees maintain buying power. Retirees get a cost-of-living adjustment when a comparison of the costs of goods and services shows prices are increasing year over year. The only reason retirees are getting such a big benefits bump is because data shows inflation is surging. And inflation isn't good for retirees.

When prices rise, seniors' buying power ends up falling because their savings don't stretch as far. Savings is one of two important income sources for older Americans, along with Social Security. If you're retired and withdrawing a set amount from your retirement account, and that money doesn't buy as much as it did in the past, you end up worse off.

You may think the big Social Security raise helps offset the damage inflation does to the value of retirees' savings. After all, they'll get bigger retirement benefit checks. The only problem with that is the best a COLA will do is help a retiree keep pace with cost increases. It shouldn't increase buying power because the COLA calculation matches changes in the consumer price index.

And that's a best- case scenario. If inflation goes up more than the COLA because the consumer price index used to measure rising prices doesn't match senior spending , even a big raise could leave retirees unable to keep up with rising costs. And if inflation surges after the annual COLA is calculated , the raise won't even be big enough for retirees to cope with higher prices.

There's reason to suspect both of these things will happen in 2022. As a result, even after the biggest raise in four decades is applied to Social Security checks, those checks won't stretch as far.

Retirees have valid reason to be concerned that consumer price indexes have revealed that inflation is higher than it's been for decades. While they may be excited to see a big change to their Social Security checks in the form of larger benefits, belt tightening may still be called for, despite the fact they'll get more money.

Didn't help us one bit took away our foodstamps up our rent up our medication up the the food cost up the gas prices and everything else. No Didn't do a thing fo us.

not much help at all!!! Food prices going up gas n electric is going up n this cold cold weather is not helping got to turn up the heat. Putting on more clothes is not the answer.

iam 73 and didnt even notice a increase.they make a big deal about this then take 170 out what a joke

MILLIONS of Americans are set to receive Social Security checks worth up to $1,657 tomorrow. The cash boost will come just 48 hours before Supplemental Security Income payments, worth up to $841, are set to land in around eight million bank accounts on April 29. Seniors with birthdays on the...
BUSINESS・29 DAYS AGO
GOBankingRates

The average monthly payment for Social Security retirement benefits is $1,613.77. That's not enough to get by in most places in America, but Social Security was never meant to serve as a retiree's...
ECONOMY・4 HOURS AGO
GOBankingRates

The First Thing You Should Do With Your Social Security Check

Whether you're 20 years old or 10 years away from retirement, it's important to plan how you're going to supplement your income and spend your money during your golden years. For many soon-to-be...
PERSONAL FINANCE・7 DAYS AGO
The Motley Fool

Rumors regarding a fourth stimulus check are making the rounds.
BUSINESS・3 HOURS AGO

According to the U.S. Department of Agriculture, emergency allotments were authorized under the Families First Coronavirus Response Act to help address temporary food needs during the pandemic for...
POLITICS・2 DAYS AGO
GOBankingRates

May is almost here, and millions of households are looking forward to their next SNAP payments. See: Surprising Things You Can Buy With Food StampsFind: SNAP 2022 -- Is My State Giving Out Extra Money...
AGRICULTURE・4 DAYS AGO
The Motley Fool

Your savings will go further in retirement if you follow these tips.
PERSONAL FINANCE・2 DAYS AGO

If you're getting a home inspection, be on the lookout for this important contract term.
REAL ESTATE・2 DAYS AGO
GOBankingRates

Some retirees are surprised to learn that the federal government, in certain circumstances, taxes Social Security benefits. Even more surprising to some is that certain individual states also apply...
CALIFORNIA STATE・24 DAYS AGO
The Motley Fool

What to Do if You Don't Need Your RMD

Just because you need to withdraw your money from your retirement accounts, it doesn't mean you need to spend it.
ECONOMY・2 DAYS AGO
The Motley Fool

Be careful -- you don't want to make a huge mistake.
PERSONAL FINANCE・8 HOURS AGO
The Motley Fool

One change helped get me on track.
LIFESTYLE・1 DAY AGO
The Motley Fool

Why You Shouldn't Always Trust Home Appraisals -- but They Matter Anyway

2 Things to Consider When Picking Between IRAs

It mostly depends on where you are in your career.
INCOME TAX・6 HOURS AGO