Australian Open favorite Daniil Medvedev called his opponent 'lucky' and 'boring,' then lost it with the umpire in another feisty outburst 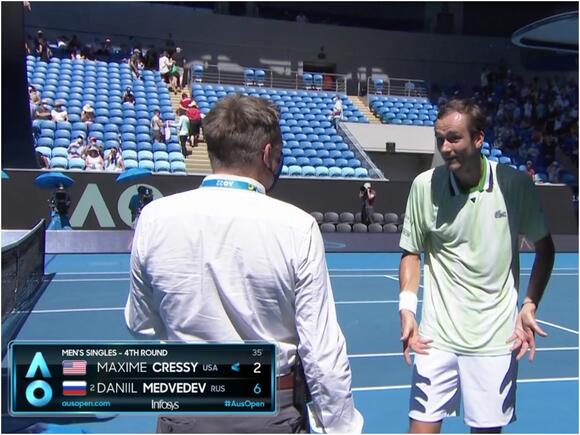 Daniil Medvedev admitted he "got a little bit crazy" after ranting at the umpire, his opponent, and another official during his fourth round win at the Australian Open on Monday.

The Russian second seed (behind only the deported Novak Djokovic) reached the quarter-finals with a four-set victory over American Maxime Cressy on a blisteringly hot day in Melbourne. He won 6-2, 7-6, (7-4), 6-7 (4-7), 7-5.

Medvedev first lost his cool with an official after clinching the first set, complaining that he needed to change his shirt, which was wet through with sweat.

After Cressy won the third set, Medvedev then turned his frustrations to the chair umpire, who he accused of allowing his opponent too much time on his serve.

Medvedev then took to yelling at Cressy as he struggled to break the 24-year-old's resistance in the final set.

"This is so boring," the world number two could be heard shouting towards the end of the fourth, while he also screamed: "He is so lucky! I've never seen anything like this in my whole life. It's simply unbelievable."

During his on-court interview after the match, Medvedev described the match as his "unluckiest" ever.

"I've played some tougher ones but this was long. It wasn't easy," he said of the clash, which lasted around three-and-a-half hours.

"The fourth set was crazy. Every time I had a break point he would have second serves and hit the line. I couldn't return them."

He later told Eurosport that he regretted his behavior throughout the tie, while he also claimed that the comments aimed at Cressy in the match were to try and get in the American's head.

"During the match I got a little bit crazy, I think with myself," he said.

"I was trying to talk something in the air to get into his mind a little bit so maybe he starts saying 'what the hell is Medvedev saying' and misses some shots."

Medvedev added: "I'm not happy with what I said today."

Medvedev's outbursts on Monday come just days after he clashed with the crowd after his third round win over home favorite Nick Kyrgios on Thursday.

Throughout the match at the Rod Laver Arena, which Medvedev won 7-6 (7-1), 6-4, 4-6, 6-2, fans in the stands could regularly be heard shouting Cristiano Ronaldo's famous goal celebration "SIUUU."

Medvedev mistook the chants for jeers and called the fans out after the match.

"[Remaining calm and focused] is the only choice when you get booed between first and second serve," he said during his on-court interview. "You have to stay calm and win the match."

In a later interview he then called the chants "disappointing," while suggesting those responsible have a "low IQ."

Biniam Girmay earned a stage victory in the Giro d'Italia and, when on the podium, suffered a hemorrhage when a popped cork struck his eye.
CYCLING・6 HOURS AGO