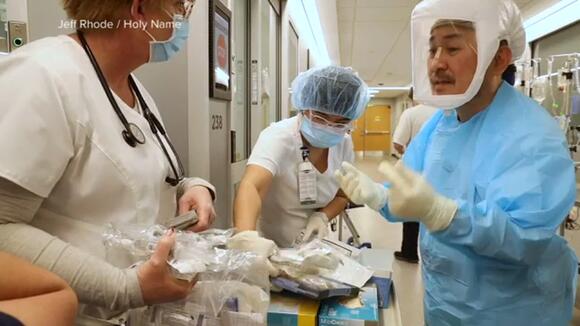 Dr. Anthony Fauci remains cautiously optimistic as the country appears to emerge from the omicron surge, with cases nationwide dropping by 10% in the last week. The Tri-State area along with New England and the Upper Midwest have already seen cases hit their peak. However, Dr. Fauci warns we've been surprised by this virus before and could encounter another variant. He says he hopes the country can find a long-term strategy for dealing with future variants. RELATED: What are the symptoms of the COVID omicron variant?

School mask rule to continue after New York state judge overturns mandate A New York judge ruled Monday that the state's mask mandate can't be enforced, after it was reinstituted by Gov. Kathy Hochul over concerns about a winter surge of coronavirus cases. However, the New York State Department of Education issued a statement that schools must continue to follow the mask rule until the case is resolved. 4 children have died from COVID-related complications in NJ since Christmas State Health Commissioner Judy Persichilli says there have been four pediatric deaths since Christmas . Twelve children have died in New Jersey since the pandemic began, eight of them younger than 5 and unable to be vaccinated. NJ COVID cases down two-thirds in the last two weeks New Jersey is among the list of states, including New York, that are seeing more positive signs in the fight again COVID and the omicron variant. In the last two weeks, the 7-day average for new daily cases in the Garden State has dropped by two-thirds . "We're also optimistic about the rate of transmission, which has fallen below one and continues to drop, as well as the test positivity rate," Governor Phil Murphy said. The governor also said that overall hospitalizations have been dropping significantly over the past week, but the numbers are still higher than anything we had seen with the two prior surges. "We also remain very concerned about the ICU and ventilator numbers, which are coming down much more slowly," he said. Military doctors, nurses arrive in NYC to help with omicron COVID surge Federal help in the form of military doctors and nurses arrived at New York City Health + Hospitals Coney Island Monday to help with staffing shortages. Help also arrived at University Hospital in Newark over the weekend. It's all part of the Biden administration's effort to address the surge in hospitalizations due to omicron, and similar resources will be arriving at North Central Bronx Hospital on Friday. President Joe Biden announced plans earlier this month to send military medical teams to the New York and New Jersey area to help with the omicron surge. Sarah Palin COVID-19 tests delay libel trial against NY Times An unvaccinated Sarah Palin tested positive for COVID-19 Monday , forcing a postponement of the start of a trial in her libel lawsuit against The New York Times. The former Alaska governor's positive test was announced in court just as jury selection was set to begin at a federal courthouse in New York City. Palin claims the Times damaged her reputation with an opinion piece penned by its editorial board that falsely asserted her political rhetoric helped incite the 2011 shooting of then-Arizona U.S. Rep. Gabby Giffords. The newspaper has conceded the initial wording of the editorial was flawed, but not in an intentional or reckless way that made it libelous. U.S. District Judge Jed Rakoff said the trial can begin Feb. 3 if Palin, 57, has recovered by then. Youngkin faces new lawsuit as Virginia mask order kicks in Republican Virginia Gov. Glenn Youngkin is facing a new legal challenge over his executive action that aimed to let parents opt out of school mask mandates as his order takes effect. Youngkin issued the order as one of his first acts after being sworn in as governor. It kicks in Monday, but confusion has swirled over its implications. Some districts have interpreted the order as being at odds with a state law that deals with COVID-19 mitigation in schools and have opted to keep pre-existing mask mandates in place for students. It wasn't immediately clear Monday morning whether conflict would unfold at schools across the state over the conflicting guidance. When am I contagious if infected with omicron? When am I contagious if infected with omicron ? It's not yet clear, but some early data suggests people might become contagious sooner than with earlier variants - possibly within a day after infection. The U.S. Centers for Disease Control and Prevention says people with the coronavirus are most infectious in the few days before and after symptoms develop. But that window of time might happen earlier with omicron, according to some outside experts. That's because omicron appears to cause symptoms faster than previous variants - about three days after infection, on average, according to preliminary studies. Based on previous data, that means people with omicron could start becoming contagious as soon as a day after infection. Stay home or work sick? Omicron poses a conundrum for workers without paid sick days As the raging omicron variant of COVID-19 infects workers across the nation, millions of those whose jobs don't provide paid sick days are having to choose between their health and their paycheck . While many companies instituted more robust sick leave policies at the beginning of the pandemic, some of those have since been scaled back with the rollout of the vaccines, even though omicron has managed to evade the shots. Meanwhile, the current labor shortage is adding to the pressure of workers having to decide whether to show up to their job sick if they can't afford to stay home. "It's a vicious cycle," said Daniel Schneider, professor of public policy at the Harvard Kennedy School of Government. "As staffing gets depleted because people are out sick, that means that those that are on the job have more to do and are even more reluctant to call in sick when they in turn get sick."

ANOTHER batch of stimulus checks worth up to $1,200 is set to go out to thousands of Americans this month. Under California’s Golden State I (GSS 1) and Golden State Stimulus II (GSS II) programs launched in 2021, eligible residents are getting up to $1,100 and $1,200 respectively. In...
CALIFORNIA STATE・29 DAYS AGO
Fox News

It’s a story many have heard before. COVID-19 enters a household whether through a spouse, parent, sibling or caretaker – but despite extensive exposure, not everyone gets sick. [. SEE:. Latest Coronavirus and Vaccine News ]. And it could be a more common occurrence than some think. The...
PUBLIC HEALTH・26 DAYS AGO

MEXICO CITY — Mexican President Andrés Manuel López Obrador on Monday urged U.S. Latinos not to vote in November’s midterm elections for politicians who have “mistreated” them, in response to a comment by former U.S. President Donald Trump. Trump boasted at a rally in...
PRESIDENTIAL ELECTION・21 DAYS AGO
MSNBC

A new Republican-backed law in Florida will repeal Disney’s special tax status, resulting in a property tax increase of up to 25% for residents of Orange County. MSNBC’s Lawrence O’Donnell explains how the move comes as GOP retribution for Disney’s opposition to Florida’s “Don’t Say Gay” bill.April 26, 2022.
FLORIDA STATE・22 DAYS AGO
Business Insider

Greene testified on Friday that she didn't recall whether she asked Trump to invoke military rule, despite telling Meadows to relay the idea to Trump.
ATLANTA, GA・22 DAYS AGO
WashingtonExaminer

When President Joe Biden named Kamala Harris as his running mate, he promised his former campaign rival would be one of the most influential voices in the White House.
PRESIDENTIAL ELECTION・22 DAYS AGO

House Republican Leader Kevin McCarthy (R-CA) (Joe Raedle/Getty Images) There was a flurry of headlines last week when news broke that House Minority Leader Kevin McCarthy (R-CA) said out loud that he thought former President Donald Trump should resign in the wake of the deadly Jan. 6 insurrection. The focus was on the fact that McCarthy lied about ever expressing that thought - until, of course, he was confronted with the audio recording of him saying exactly that.
CONGRESS & COURTS・21 DAYS AGO
Salon

A plethora of downright bizarre scientific research from the Department of Defense previously kept under wraps has been uncovered, revealing an array of peculiar schemes proposed by the United States military. One outlandish proposal suggested detonating nuclear bombs on the moon to create a tunnel through it. Millions in taxpayer dollars were spent on the research, which appears to have relied on a contractor, Bigelow Aerospace Advanced Studies, which was owned by multi-millionaire Robert Bigelow, a hotel impresario. The public was kept in the dark until now regarding what research was being funded.
ASTRONOMY・21 DAYS AGO
Business Insider

The FBI also seized financial records and fine art in the October 2021 raids on properties linked to billionaire Oleg Deripaska, per Bloomberg.
WASHINGTON, DC・22 DAYS AGO
The Independent

Donald Trump’s favoured candidates are facing their GOP rivals today in Pennsylvania and North Carolina while elsewhere races are being held in Kentucky, Oregon and Idaho.In Pennsylvania, Mr Trump has endorsed Dr Mehmet Oz, the celebrity TV doctor who hopes to capture the GOP’s nomination to succeed retiring Republican Senator Pat Toomey. Dr Oz is facing a stunning late-in-the-day surge by “ultra-Maga” candidate Kathy Barnette – reflecting problems of his own, in particular a lack of enthusiasm among conservatives. He has also notably refused to repeat Mr Trump’s mantra that the 2020 election was stolen, a particularly risky move...
PENNSYLVANIA STATE・22 HOURS AGO

Rep. Marjorie Taylor Greene (R-GA) speaks to supporters of former U.S. President Donald Trump at the Banks County Dragway on March 26, 2022 in Commerce, Georgia. This event is a part of Trump's Save America Tour around the United States. (Megan Varner/Getty Images) On Monday, CNN's Andrew Kaczynski and Em...
COMMERCE, GA・21 DAYS AGO
HeySoCal

A self-described “comically terrible spy” who is believed to have worked with federal authorities investigating the activities of Deutsche Bank and its ties with former President Donald Trump was found dead east of Lincoln Park, police said Tuesday. Valentin Broeksmit, 45, was found about 7 a.m. Monday in...
LOS ANGELES COUNTY, CA・21 DAYS AGO
HuffPost

Thomas Webster’s trial kicked off with dueling videos from the Capitol and competing theories of what they showed.
LAW ENFORCEMENT・21 DAYS AGO

WASHINGTON (Reuters) - The United States on Tuesday offered a reward of up to $10 million for information on six people it described as Russian military intelligence officers who had conducted cyber attacks affecting critical U.S. infrastructure. The six officers work in a cyber-focused unit of Russia's Main Intelligence Directorate...
PUBLIC SAFETY・21 DAYS AGO
Newsweek

Individual judges may not like the policy choices of the Biden administration, but it is not their job to weigh in on that policy debate.
TEXAS STATE・22 DAYS AGO
CBS News

Pennsylvania Republican Senate candidate Kathy Barnette's campaign believes that photos appearing to show her on the streets of Washington, D.C. on Jan. 6th are of her, a person close to the campaign confirmed to CBS News. The images appearing to show Barnette were first reported by Chad Loder, who researches...
PENNSYLVANIA STATE・1 DAY AGO
Newsweek

The poster offered a solution for what someone should do should they see someone in the restroom they don't think matches the sign on the door.
RELIGION・22 DAYS AGO