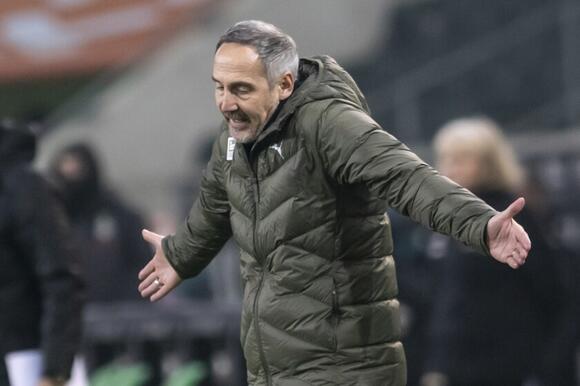 Hütter’s team is going through a crisis of form when it should be pushing for European qualification.

Gladbach’s 2-1 loss at home to Union Berlin on Saturday was the team’s seventh defeat in nine games across all competitions, and it came just days after it was knocked out of the German Cup in a meek performance against second-division Hannover.

Gladbach had beaten Bayern Munich 5-0 in the previous round in October and expected to go much further in the competition.

Despite starting the year by beating Bayern again in the Bundesliga, Gladbach has slipped to 12th place in the 18-team league, just three points above the relegation zone.

Hütter was terse Saturday when asked if he will still be in charge for the team’s next game at Arminia Bielefeld on Feb. 5.

Gladbach’s sporting director Max Eberl missed the loss to Union due to an unspecified illness, but he is likely to give Hütter more time to address the team’s shortcomings.

Hütter enjoyed a largely successful spell in charge of Eintracht Frankfurt from 2018-21, and Gladbach reportedly paid its league rival 7.5 million euros ($8.5 million) for his services to replace the Borussia Dortmund-bound Marco Rose.

That deal was announced in April , when Hütter’s Frankfurt team was fourth and on course for Champions League qualification. The Austrian coach also took Frankfurt to the Europa League semifinals in 2019 in his first season in charge.

Both Frankfurt and Gladbach slumped once their coaches’ departures were announced last season. Frankfurt stumbled in its last few games before finishing fifth, while Gladbach eventually finished eighth after going seven Bundesliga games without a win when Rose’s exit was announced in February.

Hütter still has the Gladbach players’ support, and the team’s performance against Union was much improved from the showing in the 3-0 loss to Hannover on Wednesday.

But Hütter hasn’t been able to address the inconsistency that Gladbach previously displayed under Rose. He often changes systems and personnel. The team can show flashes of brilliance, but 37 goals conceded is the league’s third-worst record.

Meanwhile there are questions over the futures of Marcus Thuram, Matthias Ginter and Denis Zakaria. The latter, whose contract expires at the end of the season, is being linked with Bayern.

Some of the problems are Eberl’s and not Hütter’s. The sporting director will have work to do when he returns.

Rangers and Eintracht Frankfurt meet in the Europa League final on Wednesday, with the winner ending a decades-long title drought in European soccer
SAN DIEGO, CA・5 HOURS AGO