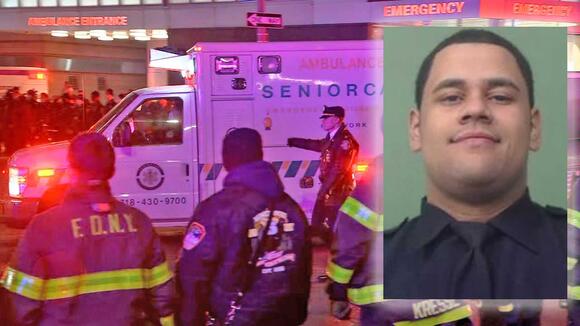 NYPD officer Wilbert Mora, who was wounded and his partner killed while responding to a domestic call, continues his fight for life Monday after being transferred to NYU Langone Health in Kips Bay. A police procession accompanied the ambulance carrying Officer Mora Sunday night from Harlem Hospital, and a line of first responders saluted as he arrived on Manhattan's East Side.

The 27-year-old officer, a four-year veteran of the NYPD, suffered life-threatening injuries after being shot in the head Friday night in Harlem. Rookie Officer Jason Rivera, 22, was killed. Rivera was the first to encounter the shooter in a back bedroom after his mother called 911 saying he was being problematic. Funeral plans have now been finalized for the officer, who will be laid to rest later this week. ALSO READ | Mayor Adams says all city agencies will join fight against gun violence in NYC

Services for Rivera will be held at St. Patrick's Cathedral with a wake on Thursday from 1-8 p.m. and a funeral on Friday at 9 a.m. Meanwhile, a vigil was set to be held outside the 32nd precinct in Harlem on Monday night.

Jim Dolan has more on a vigil set to be held outside the 32nd precinct for NYPD officers Jason Rivera and Wilbert Mora.

A solemn scene unfolded Sunday with a column of uniformed police officers, as well as a line of firefighters, flanking the streets as a hearse carrying the fallen officer left the medical examiner's office. Over the weekend, Eyewitness News spoke to one of Rivera's former teachers, who said he joined the force to make a difference. "The idea of him being the first person to run toward, to go toward a problem, to try to help solve a problem to go and try help somebody in need, is absolutely characteristic of Jason," Samantha Love said.

A solemn scene unfolded Sunday with a column of uniformed police officers, as well as a line of firefighters, flanking the streets as a hearse carrying the fallen officer left the medical examiner's office.

Meantime, a third officer at the scene of Friday night's violence is being hailed a hero. Officer Sumit Sulan joined the NYPD last year and was already winning praise for getting illegal guns off the streets. The 27-year-old officer fired the shot that finally took down the alleged shooter, Lashawn McNeil, who police say was in possession of a gun stolen from Baltimore in 2017. WATCH | Commissioner Sewell: 'Our department is hurting, our city is hurting'

McNeil was hospitalized in critical condition. He was pronounced dead on Monday afternoon after showing no brain activity since Friday. Mayor Eric Adams spoke to Officer Sulan's parents. "They understand what every parent understands, that you just want your child to come home," Adams said. "And when I hugged his mother, she talked about, she just stays up every time her son was on duty." ALSO READ | How to help families of NYPD officers slain in line of duty

A police car remained outside an apartment building in Brooklyn on Sunday night after a young girl was found dead in her fourth-floor apartment.
BROOKLYN, NY・3 DAYS AGO
ABCNY

The mugger stole about $4,200 from the victim's pocket before fleeing.
QUEENS, NY・4 DAYS AGO
ABCNY

Buffalo supermarket mass shooting: What we know about the alleged gunman

Authorities say the suspect who fatally shot 10 people and injured three others at a Buffalo supermarket Saturday traveled from another New York county hours away, and that the attack may have been planned months beforehand.
BUFFALO, NY・3 DAYS AGO

Authorities say the suspect who fatally shot 10 people and injured three others at a Buffalo supermarket Saturday traveled from another New York county hours away, and that the attack may have been planned months beforehand.
BUFFALO, NY・2 DAYS AGO
Law & Crime

Jurors found a man guilty of all charges for murdering a woman he briefly dated. “I’m still alive,” Brandon Roberts, 29, yelled Tuesday as judicial marshals took him from that courtroom in Bridgeport, Connecticut, according to The Connecticut Post. He shot therapist Emily Todd, 25, in the back...
23 DAYS AGO
ABCNY

One teenager is dead and another was rescued after being trapped beneath a sand collapse at a beach in New Jersey on Tuesday.
TOMS RIVER, NJ・1 DAY AGO
Fox News

New police bodycam footage has been released showing a chaotic scene at a couple’s wedding in Florida, where several guests at the reception fell ill from cannabis-laced food. Police released the new body cam footage, which shows officers questioning the newly-wed couple and catering staff members, after bride, Danya...
FLORIDA STATE・24 DAYS AGO

A white 18-year-old wearing military gear and livestreaming with a helmet camera opened fire with a rifle at a supermarket in Buffalo, killing 10 people and wounding three others Saturday in what authorities described as "racially motivated violent extremism."
BUFFALO, NY・3 DAYS AGO
ABCNY

The shockwaves from the tragedy in Buffalo are being felt in New Jersey after the shooter's writings mentioned three towns by name, including two in Ocean County and one in Hudson County.
TOMS RIVER, NJ・2 DAYS AGO
ABCNY

A spokesperson for Twitch said the livestream by the Buffalo mass shooting suspect was removed less than two minutes after the violence started
BUFFALO, NY・4 DAYS AGO
ABCNY

Four days after Suffolk Police said they do not believe Shannan Gilbert was part of the murders of sex workers committed by the Long Island Serial Killer at Gilgo Beach, Gilbert's sister tells Eyewitness News she still believes someone killed her sister.
SUFFOLK COUNTY, NY・1 DAY AGO

An NYPD officer is recovering after being attacked by a dog in Brooklyn.
BROOKLYN, NY・3 DAYS AGO
ABCNY

Police: Buffalo gunman had plans to keep killing if he got away

Had he not been stopped, Buffalo shooting suspect Payton Gendron would have driven out of the Tops parking lot and continued down Jefferson Avenue looking for more Black people to kill, Buffalo Police Commissioner Joseph Gramaglia told ABC News.
BUFFALO, NY・2 DAYS AGO
ABCNY

A gunman opened fire with a rifle Saturday at a supermarket in Buffalo, New York, in what authorities called a "hate crime and racially motived violent extremism," killing 10 people and wounding three others before being taken in custody, law enforcement officials said.
BUFFALO, NY・4 DAYS AGO
ABCNY

The Animal Care Center said they have been taking in 20% more dogs compared to last year and need to find them loving homes.
NEW YORK CITY, NY・5 DAYS AGO
ABCNY

Walter Liss, one of the most significant figures in the ABC Owned Television Stations family and abc7NY history, passed away on Monday at 78.
PHILADELPHIA, PA・2 DAYS AGO
ABCNY

Aaron Salter was a beloved community member and security guard who knew the shoppers of Tops Friendly Market by name. When they came under attack from a gunman with a rifle, he quickly sprung into action to protect his community.
BUFFALO, NY・3 DAYS AGO
ABCNY

Up Close: Bronx district attorney's plan to crack down on ghost guns

In this episode of Up Close, Bronx District Attorney Darcel Clark takes aim at ghost guns with an urgent message to major credit card companies.
BRONX, NY・4 DAYS AGO
ABCNY

A fight had broken out on Laurel Glen Drive and Shelton Police responded to the scene at around 11:55 p.m. on Saturday.
SHELTON, CT・3 DAYS AGO