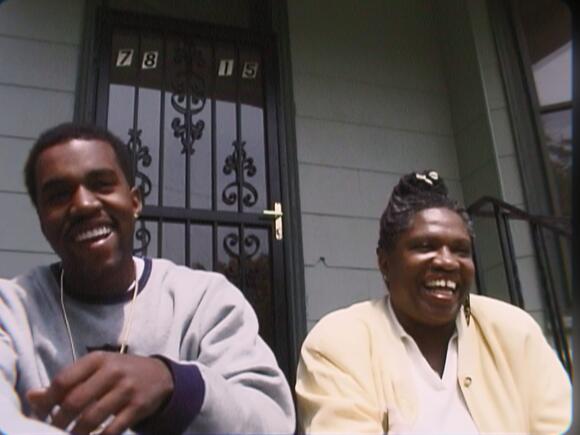 The most affecting moments in "Jeen-Yuhs" are between Ye and his mother Donda West who died in 2007 from heart failure following complications from cosmetic surgery. At the tail end of the first episode, Ye returns to his mother's home in Chicago. The pair discuss Ye's childhood and his current success as a music producer when Donda West recalls a set of early lyrics from a song by Ye that she says is her favorite.

"I walk through the halls of the school, and it's cool to be known for my rapping ability, but what about the brothers who ain't got it like me," Donda West raps, and Ye quickly joins her.

The pair continue to perform the entire verse — which, according to Genuis.com , is from an unreleased song written by Ye as a teenager.

Ye "bum-rushed" the office of Jay-Z's Roc-A-Fella Records in 2002 and performed his single "All Falls Down."

The first episode of "Jeen-Yuhs: A Kanye trilogy" opens in 2020 in the Dominican Republic and Ye (formerly known as Kanye West) is in the middle of a recording session for his latest album "Donda." As Ye freestyles furiously over a beat, attempting to conjure up a verse, the documentary jumps back in time to 1998, the start of the rapper's career and the making of his first album "The College Dropout."

At the time, Ye — who was only known for his work as a music producer — had been struggling to get members of the music industry to take him seriously as a rapper.

At one point during the first episode, Ye and his associates enter the offices of Jay-Z's Roc-A-Fella Records in a move that was described as "bum-rushing" by Clarence "Coodie" Simmons — the film's director and narrator — and Ye travels throughout the office building playing an early version of his 2004 single "All Falls Down" for staff.

Ye also performs the song live for the staff in the building.

In the late 1990s, an underground record label called Rawkus Records that was partially funded by the Murdoch family became the home of hip-hop's "conscious rappers" — that is, rap artists who discuss sociopolitical themes in their music — after it snapped up artists such as Mos Def and Talib Kweli to record contracts.

In "Jeen-Yuhs," we see a representative for Rawkus Records attempting to court Ye to sign a recording contract with Rawkus Records instead of Jay-Z's Roc-A-Fella Records. At the time, Ye had a close working relationship with Mos Def and Talib Kweli, both of whom appeared on his debut album.

Despite producing several songs on Jay-Z's blockbuster 2001 album "The Blueprint," Ye had still been struggling to convince Roc-A-Fella Records to take a chance on him. The senior management team at Rawkus Records eventually decides not to sign Ye, and he continues his quest to find representation.

Ye wanted the rapper Scarface to feature on the chorus of "Jesus Walks."

After failing to secure a recording contract with Rawkus Records, Ye restarts work on his debut album, and in an attempt to raise buzz around the album, he tries to enlist the rapper Scarface who, at the time, was one of the most popular rap artists in the world, to feature on the record.

The documentary shows the pair — who previously collaborated on Jay-Z's 2000 "This Can't Be Life" and the singles "Guess Who's Back" and "Heaven" from Scarface's 2002 project "The Fix" — in the studio. Ye plays Scarface an early version of "Jesus Walks," and asks him whether he will feature on the song's chorus.

Scarface leaves the studio to work on his verses but never makes it back to officially record the songs. Both singles eventually appeared on Ye's debut album "The College Dropout" without features.

In late 2002, Dame Dash — the co-founder and CEO of Roc-A-Fella Records — finally decides to offer Ye a recording contract, which he accepts. That same week, Jay-Z lands in Chicago for a show on his latest tour and he invites Ye on-stage to announce his news.

The documentary follows Ye backstage at the show where we see all the pageantry of a rap show in the early 2000s: There are large collections of groupies congregated around the arena, other artists pop-up, including Pharrell Williams, who we see Ye meet for the first time, and in a quiet corner amongst all the bustle, the camera spots a young Beyoncé backstage.

The camera lingers on the young singer, and she smiles before attempting to remain covert. At the time, Beyoncé and Jay-Z had collaborated on the single "'03 Bonnie & Clyde" from Jay-Z's seventh studio album "The Blueprint 2: The Gift & The Curse."

Robin Roberts got emotional as she opened up about her relationship with partner Amber Laign, especially in the midst of a challenging health battle. The Good Morning America star made an appearance on The Ellen DeGeneres Show to promote her new book, Brighter By the Day. VIDEO: Robin Roberts enjoys...
CELEBRITIES・21 DAYS AGO
The Independent

Laughter erupted in courtroom after Johnny Depp said he doesn’t watch his own movies and couldn’t recall the question he was asked. “I don’t watch them. I feel better not watching them. What was the question again?” Mr Depp said to laughter from the room. Johnny Depp trial – latest updates“Order in the court, or I will have you removed,” Judge Azcarate said. “Understood? Thank you.”The defamation trial between Mr Depp and Amber Heard began on Monday 11 April in Fairfax, Virginia following Mr Depp’s lawsuit against his ex-wife in March 2019. Mr Depp is arguing that she defamed him...
CELEBRITIES・21 DAYS AGO
Popculture

Netflix has canceled another one of its major shows, with this one getting the ax after only two seasons. Variety reports that hit sci-fi drama Raising Dion has been dropped by the streamer, following its recent season debut. The news seems to have been revealed by series star Sammi Haney, who shared the news with fans on Instagram. "Sad to say that Raising Dion is CANCELED [sic] Thank you for all of the amazing support we got from all of our wonderful fans!" Haney wrote, in part. "Season 2 was a success, equal to Season 1, even if just looking at how many people watched all of it and wanted a season 3!"
TV SERIES・20 DAYS AGO
musictimes.com

Days after Young Thug was arrested over racketeering charges, his protege Lil Keed passed away. Formally known as Raqhid Rende, Lil Keed was born in Atlanta, Georgia, on March 16, 1998. Lil Keed Died at 24: Cause of Death Unknown?. Keed's brother Lil Gotit confirmed his passing via Complex and...
ATLANTA, GA・2 DAYS AGO

While Pratt has never publicly expressed his views on sexuality, his links to a church that has been accused of supporting conversion therapy and being anti-LGBTQ have made him a target for online criticism.
MOVIES・21 DAYS AGO
ComicBook

After weeks of silence, Chris Rock has finally addressed his now-infamous incident with Will Smith at March's 94th Annual Academy Awards. During another sold-out show at Baltimore's Lyric Performing Arts Center on Friday, Rock directly referenced the slap, but only spent a second on it before moving on with his set.
BALTIMORE, MD・22 DAYS AGO
Hello Magazine

Kate Hudson has realized one of her dreams and has taken to Instagram to share the incredible news with her 15 million followers. Sharing two pictures of her looking casual in a pair of baggy dip-dyed trousers and a white tank top, and singing into a microphone, the actress announced a surprising career change.
CELEBRITIES・21 DAYS AGO
Hello Magazine

Gwyneth Paltrow is a doting mom to two teenage children, Apple and Moses, who she shares with ex-husband Chris Martin. The family are notoriously private, but over the weekend the award-winning actress gave a rare insight into their upcoming plans - and how they are changing things up this year for Mother's Day.
FAMILY RELATIONSHIPS・20 DAYS AGO

Ne-Yo and his wife, Crystal Renay, are as serious as they can be about giving their marriage another go -- TMZ's learned, they just walked down the aisle again, and they did it up big!!!. Witnesses tell TMZ ... Ne-Yo and the former reality star got re-hitched Sunday night on...
CELEBRITIES・20 DAYS AGO
HipHopDX.com

Ice Cube returned from a trip to Morrison, Colorado last week where he performed at the historic Red Rocks Amphitheater alongside Cypress Hill, E-40 and Too $hort for the annual 420 on the Rocks show. Now presumably back at home in Los Angeles, the N.W.A legend has turned his attention...
MORRISON, CO・21 DAYS AGO
hotnewhiphop.com

Flo Milli is setting some boundaries. The Alabama native is known for hits like "In The Party," "May I," and "Not Friendly," and while she loves to see fans in the audience having a good time and turning up at her shows, she's not impressed with watching them snort lines from up on stage.
CELEBRITIES・22 DAYS AGO
hotnewhiphop.com

Benzino is once again airing out some family business. After previously calling 50 Cent the “first hip-hop rat,” and getting into various other conflicts with his daughter Coi Leray, the rapper has now name-dropped both of them in a Twitter tirade. On Sunday, Fif took to Instagram to...
CELEBRITIES・21 DAYS AGO
Popculture

Spring is always a big time for engagements and weddings, and two beloved internet personalities are the latest to update their relationship status. On April 18, Rachel "Seltzer" Quirico revealed she and longtime boyfriend Trevor "TorcH" Housten were tying the knot after 17 years together. Both of them are beloved figures in the esports world, with Seltzer notably starring in the Syfy reality show WCG Ultimate Gamer. She's also hosted numerous esports tournaments and events for TV/streaming outlets; she also made a recent appearance on G4 TV's Boosted.
RELATIONSHIP ADVICE・21 DAYS AGO
Insider

"The sisters are clearly concerned for our brother's safety and the credibility of the brand," Khloe Kardashian wrote in a 2016 email.
LOS ANGELES, CA・21 DAYS AGO
Insider

Anjul Nigam told The Hollywood Reporter his team plans to finish making the movie after a police investigation into the on-set shooting is closed.
SANTA FE, NM・15 HOURS AGO