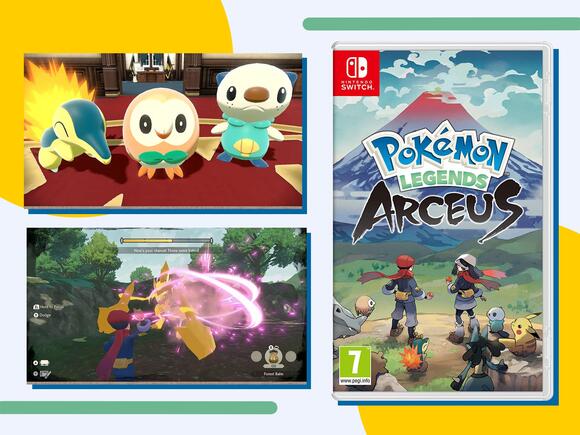 Game Freak is coming strong into 2022 with a brand new Pokémon game due at the end of January. First announced in February of last year during a Nintendo Direct event, fans were treated to a brand-new trailer that promised the open-world gameplay of Legend of Zelda: Breath of the Wild along with classic monster-catching action the games are known for.

In that trailer, viewers saw vast open fields populated with familiar Pokémon in a region that mimicked 19th-century Japan, suggesting that this game will be set earlier than previous titles as players are tasked with putting together the region’s very first Pokédex by studying the creatures and catching them in Pokéballs.

Over the last few days, we’ve also seen new details of Pokémon Legends: Arceus leaked on the internet, including unofficial details about the Pokédex as well as screenshots of the game from leakers who have managed to get a physical copy early.

Playthroughs of Pokémon Legends: Arceus have also been spotted on Twitch, as streamers have managed to access the game via an emulator.Nintendo appears to be trying to remove any pictures and gameplay ahead of release, but be cautious of searching for content if you’re hoping to keep the Hisui region free from spoilers.

The last Pokémon games we were treated to were Brilliant Diamond and Shining Pearl in November 2021, both remakes of Nintendo DS releases from 2006 that closely followed the normal series formula. With Pokémon Legends: Arceus , Game Freak is rebuilding the series from the ground up with the most anticipated Pokémon game in years.

Many longtime players will be wondering if Pok é mon Legends: Arceus will become the template for all other Pokémon titles to follow – it promises to be the most drastic overhaul in the series to date.

With that in mind, here are all the details we have about how to pre-order Pokémon Legends: Arceus , what new features we can expect and its official release date. 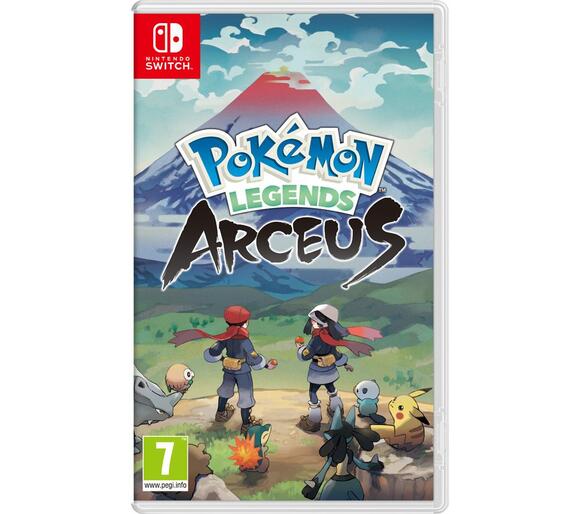 When is ‘Pokémon Legends: Arceus’ coming out in the UK?

First revealed in February 2021 during a Nintendo Direct live event, Pokémon Legends: Arceus is scheduled for a worldwide release on 28 January 2022.

What consoles will ‘Pokémon Legends: Arceus’ appear on?

In a first for mainline Pokémon games, Pokémon Legends: Arceus won’t have two separate versions being released simultaneously as was the case with Red / Blue , Diamond / Pearl , Sword / Shield and so on. The focus of this game will likely be a single-player experience rather than trading version-exclusive Pokémon, so you won’t have to worry about accidentally purchasing the same version as your friends if you were looking to trade with them.

People can pre-order from the Nintendo website (from £49.99, Nintendo.co.uk ) and receive a free steelbook (metal game case) and figurine while stocks last. Game is offering a similar deal with a steelbook case (£49.99, Game.co.uk ) while Amazon (£44.99, Amazon.co.uk ) and Smyths (£44.99, Smythstoys.com ) are offering the standalone game at a slightly discounted price.

A gameplay trailer ahead of the launch gave us a much better idea of what new features to expect. Rather than travelling between towns, battling gym leaders and winning badges, as was the case for the majority of previous titles, Pokémon Legends: Arceus will open up the world to the player to explore a wide array of different regions.

Many were quick to compare this new Pokémon title with Breath of the Wild , but rather than being one continuous open world, the game will be broken up into multiple large areas. A more apt comparison would be Capcom’s Monster Hunter series, where players would venture out of settlements to explore the wilderness and hunt the monsters therein.

So far we’ve had a sneak peak of the “Obsidian fieldlands” – an area where Pokémon that reside in forests and meadows can be found.

Pokémon Legends: Arceus also introduces a new crafting system into the game. Rather than buying items such as Pokéballs from a shop, players will be able to make their own by gathering resources, which should incentivise exploration of every corner of the map. Pokémon can also be used to help harvest materials from trees, rocks and other parts of the environment.

The different Pokémon that can be found roaming these regions will show different behaviours. Some will be docile to the player’s presence while others may appear more skittish and will need to be approached cautiously. Items, such as bait, can be used to distract Pokémon in order to make them easier to catch and observe. Other Pokémon may be more aggressive and can enter an “alert state”, where they won’t be able to be captured until they are defeated by one of your Pokémon.

When these battles occur, gameplay will shift to a turn-based battle system that will be more familiar to Pokémon veterans. However, there are now two different styles of fighting: strong and agile. Agile fighting techniques will allow your Pokémon to attack at greater speed at the cost of strength, whereas a strong style can do greater damage but leave you vulnerable to counterattacks. If a player is attacked by a Pokémon and loses all their health, they will blackout, lose some of their items and be returned to the nearest settlement.

Read more: Where to buy PS – restock updates and how to pre-order Sony’s elusive console

The main base of operations for the player will be Jubilife Village, where they can craft items, change outfits and trade Pokémon with other players. This will also be where missions and requests can be taken from the local residents. Each mission will advance the story of Pokémon Legends: Arceus , but requests are optional extras that can be undertaken for small rewards.

Where will ‘Pokémon Legends: Arceus’ be set?

According to Nintendo, Pokémon Legends: Arceus will take place in the past in the Hisui region, which goes on to be known as the Sinnoh region during Diamond and Pearl .

As a new recruit to the Galaxy Expedition team, the player character is tasked with documenting different Pokémon across the region by Professor Laventon. As the game unfolds, players will encounter an unusual phenomenon that causes ‘noble’ Pokémon to act aggressively. It will be up to players to find the cause of this unusual behaviour as the story progresses.

Pokémon Legends: Arceus will feature many of the characters from the previous games, with a handful of new creatures confirmed. It will also feature regional variants of existing Pokémon, meaning they will have new type advantages/disadvantages and an updated appearance to match the new setting.

Players will also have a grass-, water- or fire-type Pokémon to choose from at the beginning of the game – Rowlet, Oshawott, and Cyndaquil, respectively – which they can train and evolve into stronger monsters.

There have been a number of new Pokémon announced including Wyrdeer, an evolution of Stantler that can be ridden by the player, as well as Basculegion, a fish-type Pokémon that can be used to cross lakes and rivers.

Will ‘Pokémon Legends: Arceus’ work with other Pokémon titles?

According to the Pokémon website , if you have save data from Brilliant Diamond and Shining Pearl , you will be able to take on exclusive research quests to add a mythical Pokémon called Darkrai to your team.

Similarly, if you have previously played Sword and Shield , you will be able to add another exclusive Pokémon, Shaymin, to your team after the credits roll. You will also be able to claim exclusive outfits for your character to wear.

The official Pokémon YouTube channel has released a trailer showcasing the Hisui region from a 360° perspective which shows off how players will get around the region by riding Pokémon.

Has ‘Pokémon Legends: Arceus’ been leaked?

Over the last few days, screenshots have been shared by a number of leakers who have managed to get their hands on an early copy. Nintendo takes a dim view of this behaviour and the company is doing everything it can to remove any information not already made public ahead of the game’s official release.

We won’t be publishing the leaked information here as none of the screenshots making their way around Reddit, Twitter and other sites can be officially verified. But if you’re hoping to avoid any spoilers from now until release day on 28 January, it would be best to avoid looking for them on those sites.

Which Pokemon will be in ‘Pokémon Legends: Arceus’ Pokédex?

A number of older Pokemon are set to make an appearance in Pokémon Legends: Arceus. Here is an alphabetical list of the ones we have been able to verify:

Can’t wait to play? Discover the best Nintendo Switch games for every type of player

Depp said he discovered Disney would not recast him in "Pirates" days after Amber Heard's Washington Post op-ed article was published.
FAIRFAX, VA・23 DAYS AGO
The Independent

Viewers of the Channel 4 documentary Elon Musk: Superhero or Supervillain? have heaped scorn on the SpaceX founder.The documentary focused on Musk, the tech billionaire whose public behaviour and online persona have generated considerable controversy over the years.As well as highlighting Musk’s achievements, Superhero or Supervillain? delves into some of the more dubious aspects of Musk’s life and businesses, including a multi-million dollar lawsuit Musk’s company Tesla faced over allegations of racism. Viewers shared their thoughts on the series on social media, with some writing that they hadn’t known about some of the criticisms levelled at Musk until now.“Immediately...
TV & VIDEOS・2 DAYS AGO
The Independent

Tom Cruise has confirmed that he never considered releasing Top Gun: Maverick to streaming first, despite Covid delaying the film’s intended release date. The new action movie – which sees Cruise as the Navy’s top pilot, who must confront the ghosts of his past – is a sequel to the original 1986 movie, in which he also starred.After its original premiere date of 24 June 2020 was delayed nearly two years by the pandemic, the film is now scheduled to release in cinemas on 24 May.Speaking on Wednesday (18 May) at the Cannes Film Festival, Cruise was asked whether...
MOVIES・22 HOURS AGO
The Guardian

The culture secretary, Nadine Dorries, shares her Netflix account with four other households, including her mother’s, she has told MPs, calling the streaming service an “incredibly generous system”. Dorries argued that the recent share price collapse at Netflix, which is now worth less than a third of...
TV & VIDEOS・34 MINUTES AGO

'The Umbrella Academy' stars clash with Sparrows in Season 3 trailer

May 19 (UPI) -- Netflix is giving a glimpse of The Umbrella Academy Season 3. The streaming service shared a trailer for the season Thursday featuring Elliot Page, Tom Hopper, David Castañeda, Emmy Raver-Lampman, Robert Sheehan and Aidan Gallagher. The preview shows the Umbrella Academy return to the present...
TV SERIES・18 MINUTES AGO
The Independent

The man who bought the ticket that scooped the largest lottery jackpot in UK history waited until his alarm went off to tell his wife they had won £184mJoe Thwaite browsed property site Rightmove whilst he waited for Jess Thwaite to wake up, switching off the price filter for the first time.The couple, from Gloucestershire,won more than £184 million in the EuroMillions last week becoming the biggest lottery winners the country has seen.They have been married for 11 years, and share two children who are of primary-school age. Mr Thwaite also has two children studying at university from a...
LOTTERY・4 HOURS AGO