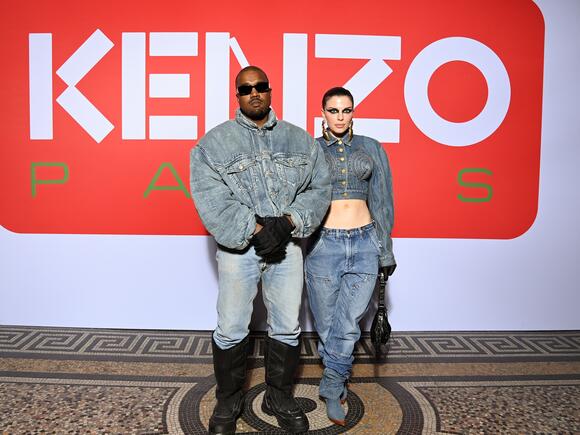 The couple made their debut this weekend at Paris Men’s Fashion Week as they attended Kenzo ’s show in matching denim looks. Speaking to WWD about her outfit, Fox said she was wearing Schiaparelli creative director Daniel Roseberry’s personal pair of jeans.

“I was just at the [Schiaparelli] showroom before coming here,” she said.

“I’m actually wearing Daniel’s pants, the designer of Schiaparelli. I took the pants off of his body and he was very kind to let me wear them,” she added.

Fox shared photographs of the pair arriving at the show to her Instagram stories. In one, West smiles at the floor as he walks with his arm around the actor’s shoulder.

At the show, the couple were seen seated between rapper Tyler The Creator and Kenzo’s artistic director, Tomoaki Nagao, better known as Nigo.

Fox and Kanye have been dating for less than a month, since meeting on New Year’s Eve 2021.

The actor shared details of their first dates in an article for Interview magazine earlier this month, writing that West had surprised her with a hotel suite full of clothes and orchestrated a photoshoot of her while out together at dinner.

The relationship comes amid West’s separation from Kim Kardashian, who filed for divorce from the rapper in February 2021.

Speaking in the latest episode of her Forbidden Fruits podcast – which she co-hosts with fellow actor Niki Takesh – on Friday 21 January, Fox said she “couldn’t care less” about the publicity she is getting from dating West.

“I don’t read any of the headlines, I’m getting all this attention, but I really couldn’t care less,” she said, adding that she is not dating West for fame.

“Honey I’ve dated billionaires my entire adult life, okay, let’s keep it real. I just care about making my art and putting thigs into the world.”

Iv bought better looking ladies clothes at the GoodWill. Oh I guess you have to be a lady to know what ladies clothes are. She is too pretty to make that kind of fashion statement. Not for her.

A TikTok creator and professional dancer, Corey O’Brien, has revealed how he recreated Kim Kardashian’s iconic outfit from this year’s Met Gala with a $12 dress from Forever 21.At the 2022 Met Gala, Kardashian walked the red carpet in a bedazzled, beige dress, previously worn by Marilyn Monroe in 1962 when she sang to President John F Kennedy on his 45th birthday.O’Brien discussed how he recreated Kardashian’s look during a recent interview with Page Six Style, acknowledging how “meticulous” he was when designing the gown.“I saved a bunch of photos and videos of the outfit, scene by scene, and then went...
BEAUTY & FASHION・1 DAY AGO
Hello Magazine

Princess Eugenie has taken to her Instagram Stories to make an exciting announcement related to The Anti-Slavery Collective, which she co-founded with her best friend Julia de Boinville back in 2017. Resharing a message from the charity organisation, the mother-of-one revealed she was posting "news from my charity". WATCH: Princess...
CELEBRITIES・24 DAYS AGO
Hello Magazine

Hoda Kotb took to social media to show her support for her co-star and close friend Jenna Bush Hager as she embarked on a brand new adventure. The Today host shared a snapshot of her co-host's book tour schedule, which took her around the country to talk about her latest release with sister Barbara P. Bush.
CELEBRITIES・25 DAYS AGO
ComicBook

After weeks of silence, Chris Rock has finally addressed his now-infamous incident with Will Smith at March's 94th Annual Academy Awards. During another sold-out show at Baltimore's Lyric Performing Arts Center on Friday, Rock directly referenced the slap, but only spent a second on it before moving on with his set.
BALTIMORE, MD・25 DAYS AGO
Hello Magazine

On Thursday evening, the Duchess of Cambridge had a show-stopping fashion moment at the premiere of Top Gun: Maverick in Leicester Square, London. Looking positively glorious alongside husband Prince William, the mother-of-three wore a glamorous Roland Mouret dress with a bardot neckline - a favourite of sister-in-law Meghan Markle. The dress was a black column style with a white band across the top that showed off her collarbones.
BEAUTY & FASHION・19 HOURS AGO
hotnewhiphop.com

Flo Milli is setting some boundaries. The Alabama native is known for hits like "In The Party," "May I," and "Not Friendly," and while she loves to see fans in the audience having a good time and turning up at her shows, she's not impressed with watching them snort lines from up on stage.
CELEBRITIES・25 DAYS AGO
HipHopDX.com

Too $hort has worked with a score of legendary producers throughout his almost 40-year career, from Jermaine Dupri and Lil Jon to Daz Dillinger and DJ Pooh. But one big-name beatsmith he passed up the opportunity to work with was Kanye West. During a recent interview with VladTV, the Bay...
CELEBRITIES・24 DAYS AGO
Hello Magazine

Gwyneth Paltrow is a doting mom to two teenage children, Apple and Moses, who she shares with ex-husband Chris Martin. The family are notoriously private, but over the weekend the award-winning actress gave a rare insight into their upcoming plans - and how they are changing things up this year for Mother's Day.
FAMILY RELATIONSHIPS・24 DAYS AGO

50 Cent cast doubt on Megan Thee Stallion's recent comments about not having been in an “intimate relationship” with Tory Lanez, prior to the infamous shooting in July 2020 which left her with gunshot wounds. Megan's comment came during a recent interview with Gayle King, during which she...
CELEBRITIES・23 DAYS AGO
PopCrush

90 Day Fiancé: Before the 90 Days star Johnny Chao is showing off a new look on social media. The reality TV star rocked a fresh-faced look on the show. However, Chao debuted some new facial hair in his most recent post on Instagram. More specifically, he grew a beard and mustache.
TV & VIDEOS・23 DAYS AGO
hotnewhiphop.com

Kim Kardashian's ex-husband, Damon Thomas, continues to "wish her the best," despite any false narratives about their past relationship. The 51-year-old sat down with DJ Vlad, looking back at his marriage with now-billionaire businesswoman Kim Kardashian in the early 2000s. He believes he's played a "part in their journey," however, he doesn't want to be known as "Kim Kardashian's husband" and wants to "get in control of [his] narrative," as many people fail to recognize he has won Grammys and even made it to the Oscars.
RELATIONSHIPS・23 DAYS AGO
Newsweek

While Pratt has never publicly expressed his views on sexuality, his links to a church that has been accused of supporting conversion therapy and being anti-LGBTQ have made him a target for online criticism.
MOVIES・25 DAYS AGO
Insider

"The sisters are clearly concerned for our brother's safety and the credibility of the brand," Khloe Kardashian wrote in a 2016 email.
LOS ANGELES, CA・24 DAYS AGO
The Independent

Viola Davis has said that a director she’d known for years once called her by his maid’s name.The First Lady star was speaking about Black representation in Hollywood during a panel at Cannes film festival when she recalled the incident.The 56-year-old used it as an example of the micro-agressions Black actors experience “all the time” in the film industry.“I had a director who did that to me,” she said, per Variety. He said, ‘Louise!’ I knew him for 10 years and he called me Louise and I find out that it’s because his maid’s name is Louise.”She continued: “I...
CELEBRITIES・1 DAY AGO
hotnewhiphop.com

It seems Coi Leray is getting fed up with the drama. She and her father, Benzino, have not seen eye to eye for quite some time, and despite numerous attempts to mend their relationship, they keep ending up back at square one. Yesterday, 50 Cent, whose been feuding with Benzino...
CELEBRITIES・25 DAYS AGO
EW.com

Firefly wins The Masked Singer season 7 after emotional reveal: 'It feels so good'

Warning: This article contains spoilers about the season 7 finale of The Masked Singer. And just like that, another season of The Masked Singer has come to a close, and another veiled vocalist has been crowned. The finale Wednesday night was just an hour long, but it packed in five...
TV SERIES・1 DAY AGO