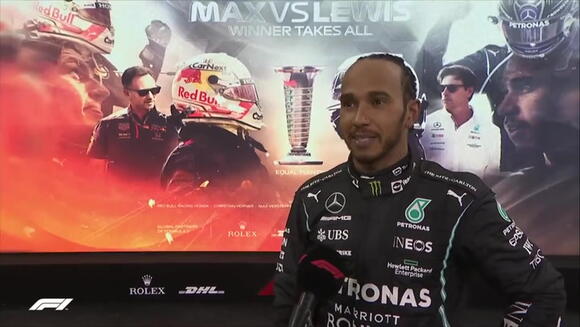 Max Verstappen has suggested that he will need “a bit of luck” and a “dominant team” if he is to replicate the long-term success of rival Lewis Hamilton .

A thrilling world title race was decided under controversial circumstances, with Hamilton reportedly undecided about whether to return to the Formula 1 grid for the 2022 season as he awaits the results of an FIA investigation into events in the United Arab Emirates.

Having achieved his first goal of becoming world champion, Red Bull’s Verstappen is eyeing similar sustained success - though admits that much will have to fall his way if he is to match Hamilton’s considerable achievements.

“Everything that comes now is just a bonus and I am just going to enjoy it,” Verstappen told CarNext about building on his maiden Drivers’ Championship.

“You need a bit of luck to fight for seven or eight [titles]. You need a very dominant team as well to do that so you don’t always have that luck or you are not in that era.

“Sometimes it doesn’t happen. For me, I always wanted to win one and you will see where you go from there.

“Everything that comes now is a bonus but that doesn’t mean that if I lose a race... I will still be upset, but maybe a few minutes after I will say ‘it’s ok’.”

The 2022 season begins in Bahrain in March, with Hamilton yet to comment publicly on his future.

The British driver has not posted on social media since before race day in Abu Dhabi.

Should Hamilton take up his seat, he will have a new partner at Mercedes in compatriot George Russell, who has arrived from Williams.

It's not about luck it's Skills as a Driver. You can have a great car Team as well. But if you can't put all 3 together. It means nothing Max needs to understand as well. Unlike him due to Lewis's Skin Color. He's fought from Day One to achieve his Goals. Max on the other hand had a different Deal. He had a Father who was a F1 Driver. Unlike Lewis who didn't so sorry Max no your the Lucky One!

Aston Martin have unveiled a radically different car ahead of this weekend’s Spanish Grand Prix as the team desperately look to address their performance issues this season. The team are second bottom in the drivers standings after five races of the season and promised upgrades ahead of the return to the Circuit de Catalunya. Aston Martin mechanics were seen working in the paddock as rival teams noted a completely different design on the car expected to be driven by Sebastian Vettel and Lance Stroll in Barcelona. Of the changes, Aston Martin have altered their sidepod design and have brought in...
MOTORSPORTS・1 HOUR AGO
The Independent

Charles Leclerc will be hoping he can return to winning ways at the Spanish Grand Prix this weekend as he looks for a third victory of the season.Reigning world champion Max Verstappen became the first driver to secure back-to-back wins in the 2022 season when he followed up his Emilia Romagna GP triumph with another victory in Miami.However, the Red Bull driver remains 19 points adrift of Leclerc in the drivers’ standings due to his two reliability failures in Bahrain and Melbourne.LIVE: Follow practice from Spanish Grand PrixSo, if it is another battle between Leclerc and Verstappen this weekend, who...
MOTORSPORTS・42 MINUTES AGO
The Independent

Fernando Alonso has slammed Formula 1’s stewards and the FIA’s new race control setup, calling the officiating in the top tier of motorsport “incompetent” and “not very professional”.Alonso, 40, is the most experienced driver on the F1 grid and is set to overtake former Ferrari and Alfa Romeo driver Kimi Raikkonen’s record of 349 grand prix starts during the course of the 2022 campaign, but has been left unimpressed with the new structure put in place by FIA president Mohamed Ben Sulayem, who was elected to replace the outgoing Jean Todt last December.Former race director Michael Masi was sacked by...
MOTORSPORTS・39 MINUTES AGO
The Independent

Follow live updates from the opening day of action at the Spanish Grand Prix, as Formula One returns to the Circuit de Catalunya for practice ahead of the sixth race of the season this weekend. The talk among the paddock is all about Mercedes, after the team reportedly held a secret testing session in an attempt to figure out their performance struggles and catch up on the early pace set by Red Bull and Ferrari. F1 teams allow for two filming days a year where teams can run up to 100km in their current cars, enabling them to trial new...
MOTORSPORTS・3 HOURS AGO

When is the 2022 French Open and when is the draw?

The French Open kicks off in Roland Garros this week as the second major of the year takes place on the Paris clay. All eyes will be on Rafael Nadal and Iga Swiatek to see if they can reclaim their French Open titles, but there are other significant storylines to watch, including Novak Djokovic’s grand slam return and the continued rise of teenage star Carlos Alcaraz. Nadal won the first men’s major of the year in sensational style, defeating Daniil Medvedev in an epic Australian Open final in late January, but the 13-time French Open champion has been disrupted by...
TENNIS・2 HOURS AGO
The Independent

Student and middle-distance running sensation Matthew Stonier reflected on his meteoric rise last Sunday over 18 holes of golf, savouring his shock victory in the Nike Emsley Carr Mile from the night before. This Saturday the dream continues for the Loughborough student with his Diamond League debut at just 20 years old in a stacked men’s 1,500m field in Birmingham.Stonier is Great Britain’s latest young star to emerge amid a renaissance in the 800m and 1,500m, headlined this weekend by Olympic silver medalists Keely Hodgkinson and Laura Muir, and Olympic bronze medalist Josh Kerr. Domestic competition is fiercer than ever...
SPORTS・1 HOUR AGO