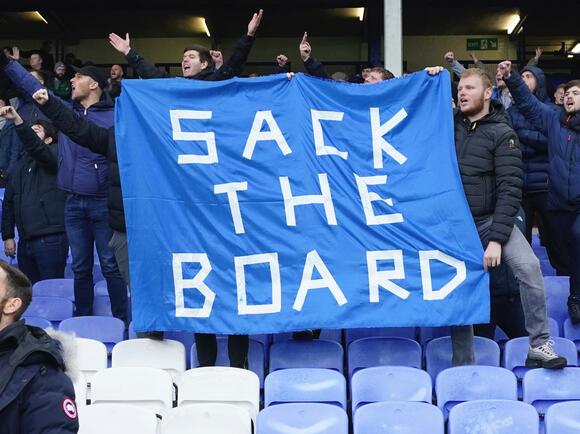 An hour after the final whistle had blown and Aston Villa had inflicted Everton ’s 10th defeat in 13 games, hundreds had been reduced to dozens, but they were still protesting. A week of one sacking concluded with supporters asking for more. “We want our club back,” read one flag. “Sack the board,” came a chorus heard time and again. Before kick-off, a plane flew over Goodison Park with a banner declaring “22 years of failure, Bill”.

The supporters who threw the bottles that hit Lucas Digne and Matty Cash were revolting. Far more were in revolt. Yet whereas the calls for Rafa Benitez’s departure were eventually heeded, this was the kind of protest that registers dissatisfaction but may not address the issue. Sack the board? Everton sacked a member of it, director of football Marcel Brands, seven weeks ago and could now do with a powerbroker with his footballing knowledge and contacts to identify and hire a manager. But while the majority shareholder delivered the board a vote of confidence last week, he can also ignore them.

And Everton are stuck with owner Farhad Moshiri, who injected another £100m into the club last week, but doomed by his decision-making. Chair Bill Kenwright did not appoint Carlo Ancelotti or Benitez, though he is seen as a champion of Roberto Martinez and some supporters would not welcome a World Cup semi-finalist back. Kenwright was confronted by fans outside Goodison, chanting: “Let go if you love the club.” When he had sole control, Everton were criticised for a lack of ambition and spending. Under Moshiri, they have paid too much, dreamed of the Champions League and plummeted towards the Championship. If it can seem that Evertonians are rarely happy, they have much to be unhappy about.

“I know how sick they are,” said the Everton fan in caretaker charge. Duncan Ferguson supported his constituency without explicitly criticising his employers. “The fans, for me, can protest and say what they like,” said the Scot. He had delivered an earlier, and damning, verdict on the calls from above. The two new full-backs bought in January, perhaps neither on Benitez’s prompting, Vitalii Mykolenko and Nathan Patterson, did not even make the bench. It does not yet mean that £27m has been wasted, but Everton are no strangers to transfers that go horribly wrong. Even one of those who could have been bracketed among their better buys in recent years, Michael Keane, was dropped.

Given Yerry Mina’s erratic display at centre-back, it is hard to present Ferguson’s decision as a success. Rather, it is indicative of Everton’s status as a place where players’ fortunes decline with a squad compiled by so many people that there is no system or style of play that suits all. When Benitez’s supposed successor could come from a seeming shortlist featuring candidates as different as Wayne Rooney, Frank Lampard, Fabio Cannavaro and Martinez, Everton’s Jackson Pollock policy of appointments could continue. The sight of Kia Joorabchian in the directors’ box was a reminder there is no problem that cannot get worse or costlier if his advice is heeded.

There were times in Moshiri’s reign when it seemed that no matter which mistakes Everton made, they could still finish in the top eight. Not any more. Years of bad decisions are catching up with them. Compile a league table since the October international break and Everton are bottom. Everyone except Watford and Burnley have more than twice as many points. A weekend when Norwich and Newcastle wins left Everton’s position looking more precarious. They dropped a place in one table: they are now in the bottom three for share of possession this season. A club who have spent half a billion on transfers in the Moshiri years can’t keep the ball.

The figures reflect tactics that were either counter-attacking (under Benitez) or long ball (under Ferguson) but also basic failings. Over a third of the season, Everton are the joint lowest scorers, with the fewest first-half goals. If 2021 was a miserable year for them, 2022 holds the potential that it could be historically bad for a club who have not been relegated since 1951. Benitez is no longer around to serve as a human shield for Moshiri, even if that mantle has now been passed to Kenwright. But this feels Moshiri’s mess, and the master of poor choices now faces his most important decision yet. Get it wrong and he may own the most expensive club in the Football League.

MANCHESTER CITY’S title hero Ilkay Gundogan plans to hold talks over his future with the club this summer. The German international – who struck twice in six minutes against Aston Villa on the final day – is going into the final 12 months of his contract. There...
PREMIER LEAGUE・57 MINUTES AGO
The Independent

Barcelona won the Champions League for a fourth time with a 3-1 victory over Manchester United at Wembley on this day in 2011.Goals from Pedro, Lionel Messi and David Villa helped coach Pep Guardiola to his second European title in three years in a game which was largely remembered for an unstoppable Messi performance.It was also the second time that Barca had beaten United in the final after a 2-0 win in Rome two years before.Barcelona had breached the United defence on several occasions during the first half but went into the break surprisingly on level terms after Pedro’s 27th-minute...
PREMIER LEAGUE・2 HOURS AGO
The Guardian

Manchester United are interested in signing N’Golo Kanté from Chelsea. Kanté’s contract expires next year and United, desperate to strengthen their midfield after underperforming last season, are keen to find out whether the France international could be sold this summer. At the moment it seems unlikely...
PREMIER LEAGUE・19 MINUTES AGO
The Independent

Ian Baraclough has warned of the dangers facing fatigued players as Northern Ireland prepare to play four Nations League games in the space of 10 days.Northern Ireland boss Baraclough is already without nine players for tests against Greece, Cyprus – who they play twice – and Kosovo in League C following relegation in the competition two years ago.Craig Cathcart, Josh Magennis and Stuart Dallas were the headline names missing from the 28-man squad announced on Friday.“The demands put on the players nowadays, (Liverpool manager) Jurgen Klopp described it as ridiculous,” Baraclough said.“Now they’re asked at the end of a long...
UEFA・9 HOURS AGO

James Gibbons used to carry a bucket around to raise money for Port Vale – now he is dreaming of lifting a trophy.The defender helped with the collections to keep the club’s academy going during dark days at Vale Park.Vale face Mansfield in the Sky Bet League Two play-off final at Wembley on Saturday in their biggest game for years.It is a world away from a teenage Gibbons, who lived just minutes away from Vale Park, walking round the stadium hoping fans would help keep his dreams alive.“When I was in the academy at the age of 13, we had...
SOCCER・9 HOURS AGO