With eight minutes plus stoppage time remaining and Manchester United still searching for a winner against West Ham, some jeers could be heard when Mason Greenwood ’s number flashed up. It was not the first time that Old Trafford has registered its displeasure with Greenwood’s removal recently. The same happened in the defeat to Wolverhampton Wanderers. This time was different, though. It was not so much about the player coming off as the one coming on.

Anthony Martial had not played a single minute under Ralf Rangnick at that point. A week earlier, he had been absent from the match day squad at Aston Villa. Rangnick suggested that he had refused the opportunity to be included, a claim Martial denied. The contradiction was put down to a misunderstanding. The two cleared the air the following day, but Rangnick did not exactly retract his allegation when given the chance. “I nominated him before the game and he was not part of the group,” he said. “You can draw your own conclusions.”

That minor episode was the reason behind Saturday’s light sprinkling of boos. Martial has a relationship with the United supporters that could be described as if not complicated, then at least nuanced. Many of the same fans who sing about how “the English press said he had no chance” would freely admit that, since arriving as the most expensive teenager in world football, he has not fully delivered on his potential. Now 26 years old, out of favour and eager to leave, clearly, his United career is coming to an end.

Exactly when his United career will end is far from clear, though. Martial could leave on loan before the close of the January transfer window but, as it stands, that will rely on one of his suitors stumping up a fee and covering his not insignificant wages, thought to be around £250,000-a-week. An approach from Sevilla has already been rejected. Juventus are interested but even their chief executive has winced at the figures involved. “With the current conditions, it’s not a feasible deal for us,” said Maurizio Arrivabene last week.

Martial could leave but he could also stay, which would mean he, United and Martial’s representatives having to reassess their options in the summer. If that happens, the semi-exile of the past month-and-a-half cannot realistically continue. Rangnick was leaving Martial out in expectation of a January departure. He is too useful a player for that to be maintained until May. And in his 10-minute cameo on Saturday – his first appearance under Rangnick of any sort – he showed that he still has a role to play if he wants it. 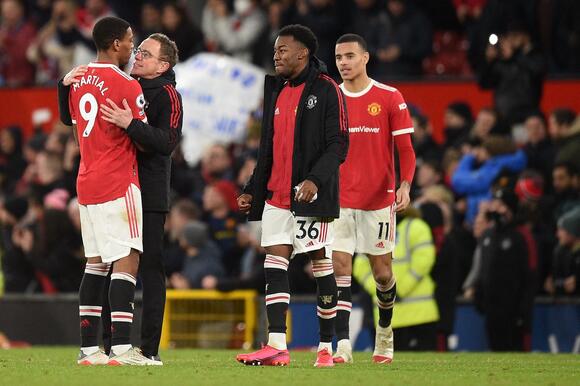 Moments after coming on, Martial was attacking West Ham’s penalty area rather than taking the more patient approach his teammates had previously employed. A prospective one-two with Cristiano Ronaldo would have taken him beyond Declan Rice and through on goal, if Ronaldo’s return had not been misplaced. Minutes later, he was switching the pace of United’s forward play again, driving at Ryan Fredericks while cutting inside from the left.

In the final minute before time added on, there was a cute flick over the top of a stranded Fredericks to play Rashford in, although Kurt Zouma was covering to shut off the danger. It was the same story a few minutes later when Martial had a sight of goal himself, his cute movement off the shoulder of Craig Dawson creating the opening. He had bought himself enough time to turn and shoot, but not enough time to avoid Zouma. 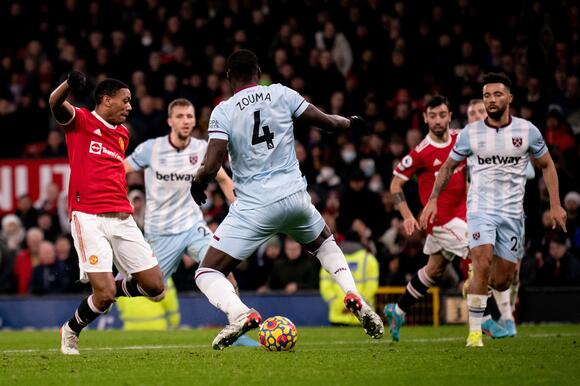 And then, of course, there was his part in the sudden and devastating counter-attack that led to Rashford’s late winner, the perfectly timed switch to Edinson Cavani to set up a cut-back to the far post. Perhaps Martial’s most impressive contribution of all had come a couple of minutes earlier, though, and at the other end of the pitch.

The top flight’s most effective team from set-pieces had just failed to score with the second of two late corners. West Ham had been worked back to near the halfway line and Fredericks, who strode forward purposefully and with the intention of getting a shot away. He did, but it was scuffed and bounced through harmlessly, all because Martial had pressed and harried the full-back all the way.

Martial’s application has often been the first thing called into question by his detractors, not always unfairly either. There are other wide forwards more diligent in their defensive duties, who are more engaged when off-the-ball, whether it is with their teammates or the opposition. But his eagerness to make things happen in and out of possession on Saturday was clear, and perhaps a consequence of the conversation with his manager. 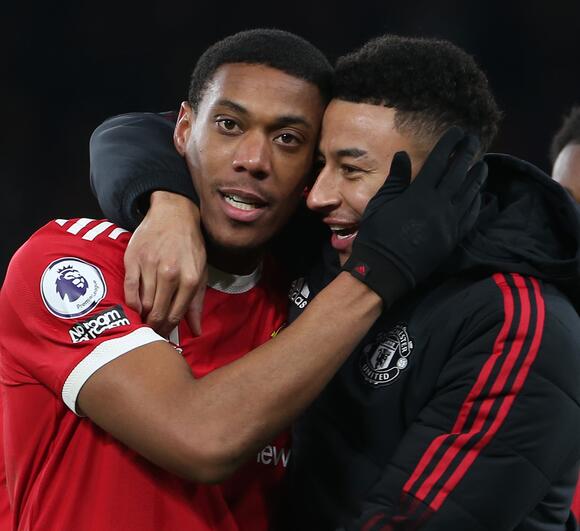 Rangnick revealed after the final whistle what he has been telling Martial in private over the past few unhappy weeks. “I’ve told him it’s about being professional until the very last day,” he said. “No matter how long he stays or when he leaves, it’s about being professional. It was good to have this conversation with him. In the last two games he was part of the squad and today he played a vital role in the goal that we scored.

“He's a top player, one of the best strikers in the Premier League, but we have other players in his position. It is his wish to leave but, as I said to him, it always takes different parts to find an agreement, and the way he trained and played when he came on today showed the professionalism I expect from everybody. I am happy he was playing today, that he came on and had a vital role in the goal.”

Martial would like to play a vital role more regularly. That probably will not come at Old Trafford, given the competition for places. He may find one elsewhere or he may have to wait, the market being the way it is. But having helped to spark a late surge on Saturday, he showed that, despite his recent absences, he is still very much a United player and, even if he is around for a bit longer than previously expected, he can still play a part.

Erik Ten Hag has spoken of his excitement after taking charge at Manchester United, who he sees as having “huge potential”.The Dutchman on Monday conducted his first press conference since being named as Ole Gunnar Solskjaer’s permanent successor last month.The former Ajax boss comes in after United, with Ralf Rangnick in interim charge, finished sixth in the Premier League table.Ten Hag opened the press conference at Old Trafford by saying he was “really excited to be here” and stressing “I want to achieve success”.He added: “The confidence is that I have a good feeling with the people around, I have...
PREMIER LEAGUE・3 HOURS AGO
The Independent

Erik ten Hag has confirmed Cristiano Ronaldo is in his plans next season as the Dutchman was unveiled as Manchester United’s new manager.Ten Hag was speaking at Old Trafford in his first press conference as new head coach, where he set out his hopes to take the club forwards after a disppointing season ended in a 1-0 defeat at Crystal Palace on Sunday, which Ten Hag watched from the stands. One of the few bright spots in a poor season was the performance of Cristiano Ronaldo, who scored 18 league goals and 24 in total. Asked whether the 37-year-old Ronaldo...
PREMIER LEAGUE・3 HOURS AGO
The US Sun

ERIK TEN HAG says he is relishing working with Donny van de Beek again after their time together at Ajax. Van de Beek won a league and cup double under Ten Hag in 2018-19 and moved on to Manchester United for £35million in August 2020. New Red Devils boss...
PREMIER LEAGUE・16 MINUTES AGO
The Independent

Noel Gallagher has revealed that he required stitches after an inadvertent clash of heads with Ruben Dias’ father while celebrating Manchester City’s Premier League title.The Oasis songwriter is a lifelong fan of the club, and was at the Etihad Stadium as Pep Guardiola’s side sealed the title with a 3-2 comeback victory against Aston Villa.Gallagher, however, was unable to watch the final moments of the game after being forced to seek medical attention after Ilkay Gundogan’s winner.The guitarist explained to talkSPORT: “As the third goal goes in, there is absolute bedlam in the stadium.“Where we sit, Ruben Dias’ family are...
PREMIER LEAGUE・2 HOURS AGO

FULHAM have confirmed the exit of 14 players including TWO of their biggest transfers ever who cost the club a combined £50million. Jean Michaël Seri and Alfie Mawson will depart the club this summer alongside 12 others players. Seri joined the club for a near £30m in the...
PREMIER LEAGUE・28 MINUTES AGO
The Independent

Tuesday marks the 50th anniversary of Rangers’ only major European triumph to date after they defeated Dynamo Moscow 3-2 in the Cup Winners’ Cup final in Camp Nou.The heroes of that triumph became known as the Barcelona Bears.Here, the PA news agency takes a look back at the careers of the 11 men who made history under manager Willie Waddell.Peter McCloyNicknamed “The Girvan Lighthouse” due to his birthplace and the fact he stood 6ft 4in tall, the goalkeeper joined Rangers from Motherwell in 1970 and went on to make more than 500 appearances for the Ibrox club before retiring in...
SOCCER・1 HOUR AGO