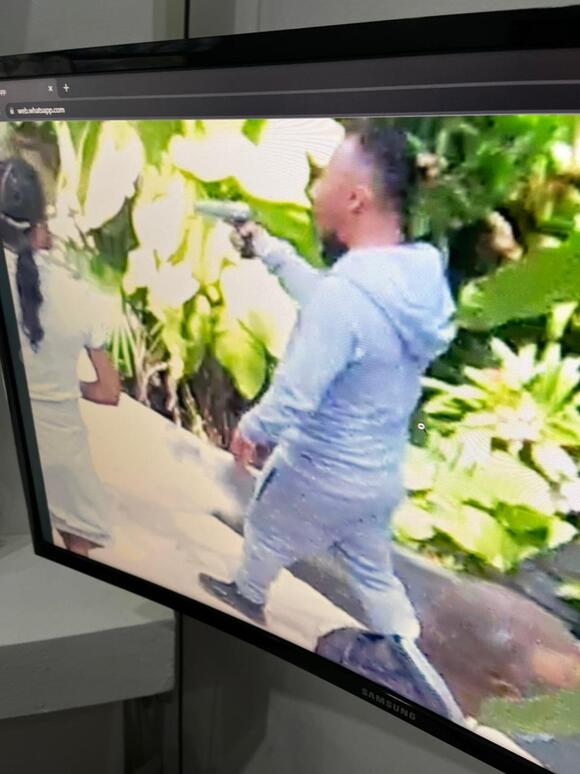 Police are looking for a shooter involved in the killing of two Canadian guests and injuring a third at a luxury hotel in Mexico on Friday.

The incident took place at an upscale resort on the Riviera Maya of Quintana Roo states the suspect, a lone gunman approached the group and opened fire at them, according to Riviera Maya News.

According to the authorities, the suspect, who is believed to have fired the shots, has a “long” criminal record in Canada, reported Reuters. Quintana Roo’s head of public security, Lucio Hernandez posted photos of the alleged shooter – a man in a grey track suit and black face mask wielding a gun in front of green landscaping.

Authorities are coordinating "a strong operation for his capture," Hernandez tweeted: "Any information leading to his prompt arrest will be greatly appreciated."

The three victims were taken to the hospital after the law enforcement arrived at the hotel, reported Newsweek. Of the three, one victim died in the ambulance, the other in the hospital, reported the outlet citing Quintana Roo prosecutor Óscar Montes de Oca. The third victim, a 29-year-old woman is still in the hospital.

The two deceased, identified as Thomas N and Robert N, had a criminal history, said the authorities, citing information from Canadian police.

In a statement, the Xcaret group said it “deeply regrets” the incident and is “providing support to those affected”.

Additional reporting from the wires

The mother of a five-year-old boy who was killed in an accidental shooting has also died just days after his funeral, authorities say.Kaylynn Davidson, 32, was fatally shot on Tuesday in the downtown area of South Bend, Indiana, charging documents seen by ABC57 and WNDU allege. She was taken to a nearby hospital, but did not survive, becoming the fourth person to die by homicide in South Bend in less than a week. Surveillance video allegedly showed 26-year-old Kimarie Wright fighting with Davidson inside a restaurant before pulling out a handgun.The mother had walked over to Ms Wright and punched...
SOUTH BEND, IN・2 DAYS AGO
The Independent

Capital murder suspect Casey White has been ordered to provide a DNA sample as part of the investigation into his 10-day prison break that ended with the tragic death of his jailhouse lover.White, 38, was ordered to hand over the sample to prosecutors by Friday 21 May or “as soon as practicable”, according to court records.Lauderdale County District Attorney Chris Connolly had filed a motion with the request, which Lauderdale County District Judge Carole Medley then granted on Wednesday.Neither the motion nor the court order details a reason why the DNA sample is needed, however DA Connolly has previously...
LAUDERDALE COUNTY, AL・2 DAYS AGO
The Independent

The family of a Goldman Sachs worker shot dead in a subway train in New York have a sobering message for their fellow residents — “the city is not safe”.On Sunday, an unidentified gunman shot and killed 48-year-old Daniel Enriquez in what New York police department (NYPD) officials called an unprovoked attack.The shooting took place around 11.40am on a Q-train travelling over the Manhattan Bridge.The gunman was pacing the train’s last car “and, without provocation, pulled out a gun and fired it at the victim at close range,” Kenneth Corey, NYPD’s chief of department, said, citing witnesses.The shooter fled...
PUBLIC SAFETY・3 HOURS AGO
CBS News

Police in Alabama say a South Carolina truck driver has confessed to killing a woman who disappeared 21 years ago and to hiding her body in a suitcase. Police in Bessemer, Alabama told news outlets that South Carolina native Brian Jones traveled back to Alabama last month and admitted to killing 41-year-old Janet Luxford in 2001. He then led investigators to a green suitcase with bones inside, police said.
BESSEMER, AL・27 DAYS AGO

This is the surreal moment 21 migrants were found concealed inside two wooden crates during a traffic stop in Texas. The shocking findings took place April 6 when state troopers and U.S. Border Patrol agents pulled over a pickup truck and disrupted the human smuggling attempt in Laredo. Footage released...
LAW ENFORCEMENT・27 DAYS AGO
Daily Mail

A British woman has died from respiratory complications brought about by Covid after she discovered she had been infected while on a cruise ship in the Mediterranean. The 60-year-old, who has not yet been named, died at the San Giovanni di Dio e Ruggi d'Aragona hospital in Salerno in the early hours of Friday morning.
WORLD・27 DAYS AGO
Upworthy

A new trend in treasure hunting called magnet fishing has blown up over the past two years, evidenced by an explosion of YouTube channels covering the hobby. Magnet fishing is a pretty simple activity. Hobbyists attach high-powered magnets to strong ropes, drop them into waterways and see what they attract.
HOBBIES・27 DAYS AGO
Law & Crime

Jurors found a man guilty of all charges for murdering a woman he briefly dated. “I’m still alive,” Brandon Roberts, 29, yelled Tuesday as judicial marshals took him from that courtroom in Bridgeport, Connecticut, according to The Connecticut Post. He shot therapist Emily Todd, 25, in the back...
26 DAYS AGO

Sign up for the Fortune Features email list so you don’t miss our biggest features, exclusive interviews, and investigations. Two Russian oligarchs found dead alongside their families within 48 hours of each other are the latest high-profile executives to die in mysterious circumstances since the beginning of the year.
PUBLIC SAFETY・28 DAYS AGO
Fox News

A sheriff in Florida arrested his own daughter on drug charges as his department continues its war on addictive substances. Franklin County Sheriff A.J. Smith gave a statement on April 19 confirming that his daughter, Kristen Kent, had been arrested under suspicion of meth trafficking two days prior. "Methamphetamine does...
FLORIDA STATE・27 DAYS AGO
The Independent

A 911 dispatcher is set to be fired after asking a supermarket worker why she was whispering as the Buffalo mass shooting unfolded around her.Latisha Rogers, an assistant office manager at Tops Friendly Markets, called the emergency services as the violence which killed 10 people took place.Now city authorities are investigating the incident as Ms Rogers says the dispatcher hung up on her and officials say they plan to sack the worker later this month.“I proceeded to whisper because I didn’t know how many people there were in the store or anything, I didn’t want to be heard,” Ms...
BUFFALO, NY・2 DAYS AGO
Newsweek

Bodycam footage captured the snake slithering around the room as an officer attempted to capture it.
BOYNTON BEACH, FL・27 DAYS AGO
Newsweek

One man has been arrested after the bear was trapped under the wheel of a tractor and tied to an earth mover.
PUBLIC SAFETY・27 DAYS AGO
The Independent

A woman who lost both arms in a savage pit bull attack keeps asking her mum to hold her hand during recovery.While Kyleen Waltman, 38, is conscious and in "good spirits", she doesn’t fully comprehend the extent of her injuries, according to sister Amy Wynn."At times we don’t think she has gripped the fact she has lost her arms because she will ask our mama to hold her hand and mama says ‘I am’, and Kyleen will say, ‘OK’," Ms Wynn said in a GoFundMe update, which has raised more than $212,000 for medical expenses."It’s sad to see her like...
ACCIDENTS・27 DAYS AGO
Outdoor Life

Paul Williams fought for his life against a large black bear on the afternoon of April 21 outside of his home in Beaubassin East, a rural Canadian community in southern New Brunswick. “She got me in the face, she got me on my arm,” he said, of his wounds estimated...
NEW BRUNSWICK, NJ・26 DAYS AGO
rolling out

A 14-year-old Black teen with autism was attacked by New York police officers while he was waiting for his siblings to finish checking out at a Target store on April 18. Video shows the Black teenage boy being tackled to the ground by deputies. His sister can be heard in the background yelling “Get off of my brother! What are you doing?”
27 DAYS AGO
Washington Examiner

Foster mother Cristal Starling faced a lose-lose proposition after officers raided her Rochester, New York, apartment in October 2020 and took all the cash they could find. Starling’s choices were simple: She could pay more than half of the seized amount to an attorney to help her fight back, or she could settle out of court and split her money 50-50 with law enforcement.
27 DAYS AGO
The Independent

A first-class passenger on an Arizona-bound Delta Airlines plane was arrested for allegedly using homophobic slurs against a flight attendant and physically assaulting the crew member for not serving him a drink.Christopher Alexander Morgan allegedly threw a glass of ice and an onboard telephone at the flight attendant for refusing to continue serving alcohol to him.Mr Morgan was arrested when flight 2908 touched down at the Phoenix Sky Harbor International Airport on 22 April and is facing charges of interference with flight crew members, which can be punishable with up to 20 years in prison.The passenger called the flight...
27 DAYS AGO
markerzone.com

A 37-year-old man has been charged with murder after a 23-year-old hockey player was stabbed and killed over the weekend in Moscow. According to reports, the man will be kept in custody until at least June 24th, when he is expected to face trial. Newer details from Sport24.ru state Roman...
PUBLIC SAFETY・27 DAYS AGO
Border Report

Mexican officials are reporting the capture of a La Linea cartel lieutenant believed to be behind the Good Friday massacre of six people on a highway near the U.S. border.
EL PASO, TX・26 DAYS AGO