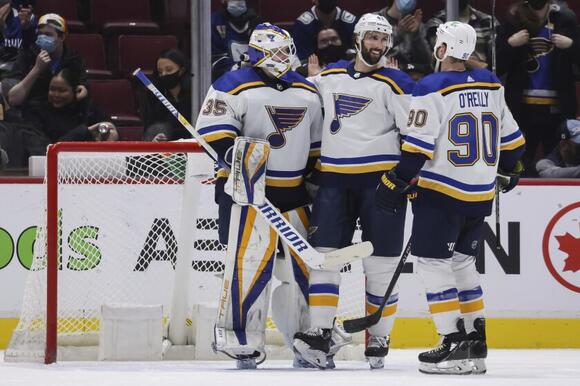 Justin Faulk had a goal and an assist and the St. Louis Blues beat the undermanned Vancouver Canucks 3-1 on Sunday night.

Brayden Schenn and Jordan Kyrou also scored for the Blues, and Vladimir Tarasenko had two assists. Ville Husso stopped 38 shots and has a .963 save-percentage in his last five games.

“When somebody plays well, it always give the teammates positive emotions, but especially when a goalie is making these performances, like almost every night and we’re very really happy for him,” Tarasenko said. “He’s a great guy and he works so hard to get success and he’s getting it right now and it’s fun to see.”

Blues coach Craig Berube liked what he saw from his team.

“Our goalie was really good tonight and we scored a couple timely goals and that was the difference in the hockey game,” he said. “Our penalty kill did a good job killing things off, got a power-play goal again. The special teams came through and our goalie came through.”

Tanner Pearson had a goal for the Canucks, who have six players and two assistant coaches in the NHL’s COVID-19 protocols.

Michael DiPietro, making his second career start and first in nearly three years, had 14 saves in his season debut for Vancouver, becoming the fourth goalie to play for the team this season.

“I definitely wasn’t as nervous as last time but the nerves were still there,” DiPietro said. “I just tried to stretch, keep my mind as calm as possible leading up to the game, kind of shake away the butterflies as early as I could. It’s a childhood dream any time you get to play hockey for a living, especially in the NHL.”

Down 3-1 with less than 90 seconds remaining, the Canucks pulled DiPietro in favor of an extra attacker. Tarasenko nearly scored an empty-netter, but was swarmed by a trio of Canucks intent on not giving up another goal.

Kyrou pushed St. Louis' lead to 3-1 with 3:17 left in the second period, firing a shot through traffic. The puck appeared to ping off the shaft of DiPietro’s stick and in. Faulk and Tarasenko both assisted on the play. Tarasenko has points in his last nine games, with six goals and nine assists in the stretch.

He also figured in the power-play goal that put the Blues up 2-1 early in the second period after the Canucks were called for too many men. Tarasenko sliced a pass to Schenn, who was stationed at the back door. Schenn poked it in for his ninth goal of the year at 3:26.

St. Louis was 1 for 3 on the power play Sunday while Vancouver went scoreless on four opportunities.

Vancouver had a 5-on-3 power play in the first period after Matthew Highmore got tangled up with both Ivan Barbashev and Torey Krug. Barbashev was called for roughing and Krug for removing Highmore’s helmet.

The Canucks managed five shots on the two-man advantage, but didn't score. However, seconds after the penalties expired, Pearson picked up Alex Chiasson’s rebound at the side of the net and fired it past Husso to give Vancouver a 1-0 lead with 3 1/2 minutes remaining in the period. Elias Pettersson registered an assist on the play, giving him 100 for his NHL career.

“Right now we’re having a hard time scoring,” Canucks coach Bruce Boudreau said. “We have a couple of breakaways here and there, we have a couple of great looks. And the one time we do score, two guys jump on the ice. ... I’m really happy with the way they worked and the way they cared. Just I expect to win every time we go on the ice so I’m unhappy with that result.”

Faulk drew St. Louis even ahead of the first intermission. Oskar Sundqvist blasted a pass to Faulk at the front of the net and the defenseman deflected it from between his legs, sending the puck careening into the crossbar and in with 1:27 remaining.

Boudreau coached his 1,000th NHL game. Hired by Vancouver on Dec. 5, the 67-year-old former NHL center has also worked behind the bench for Washington, Anaheim Ducks and Minnesota. In 2008, he won the Jack Adams Award as the league’s top coach after guiding the floundering Capitals through a bounce-back campaign.

Boudreau’s wife Crystal and two of their children were in the crowd Sunday as the milestone was marked with a video tribute before puck drop. Several of the coach’s former players — including Marcus Foligno, Alex Ovechkin and Kevin Bieksa — and colleagues like Stan Bowman delivered congratulatory messages.

Boudreau admitted to getting a bit emotional on the bench.

“You never know how you leave (players) when you get fired,” he coach said. “You don’t know if it’s the players don’t want to play for you, what have you. But when you see those players saying those things, it gets to you a little bit.”

Canucks All-Star goalie Thatcher Demko and backups Jaroslav Halak and Spencer Martin are all in the NHL’s COVID-19 protocol alongside forwards Bo Horvat, Conor Garland and J.T. Miller. Assistant coaches Scott Walker and Kyle Gustafson were added to the list on Sunday. Arturs Silovs of the AHL’s Abbotsford Canucks has also tested positive for the virus, forcing Vancouver to sign University of British Columbia goalie Rylan Toth to an amateur tryout agreement so he could act as DiPietro’s backup.

Blues: At Calgary on Monday night to finish a three-game trip.

Canucks: Host Edmonton on Tuesday night to wrap up a three-game homestand.

Wild GM Guerin: We want both Fleury and Talbot back in net

The Minnesota Wild would prefer to keep Marc-Andre Fleury and Cam Talbot as their goalies next season
SAINT PAUL, MN・5 HOURS AGO
San Diego Union-Tribune

McDavid, Gaudreau get playoff taste of "Battle of Alberta"

The Battle of Alberta returns to the playoff stage when Calgary and Edmonton meet in the second round of the Western Conference playoffs
SAN DIEGO, CA・5 HOURS AGO

Leafs staying the course after another 1st-round loss

Shakira Austin, the No. 3 overall pick in last month's draft, scored 12 of her career-high 20 points in the second half as the Washington Mystics pulled away for a 84-68 win over the Dallas Wings
SAN DIEGO, CA・2 HOURS AGO