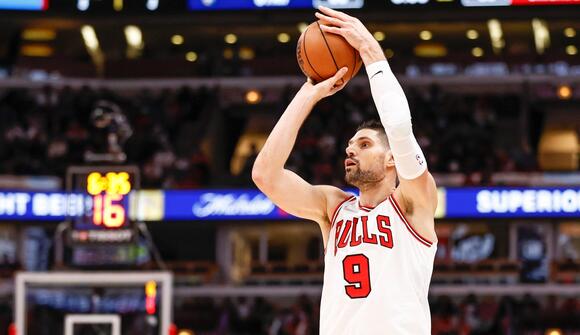 (670 The Score) In perhaps the strongest public comments yet from anyone in an angry Bulls organization, center Nikola Vucevic on Sunday called out Milwaukee Bucks guard Grayson Allen for his flagrant-2 foul on Chicago guard Alex Caruso on Friday.

Allen’s hard foul that drew him an ejection left Caruso with a fractured right wrist upon his hard fall to the floor after he was knocked off-balance by Allen swinging a second arm at him after the initial contact. It also left Vucevic upset two days later.

“It’s very disappointing,” Vucevic said Sunday after Chicago’s 114-95 loss at Orlando. “The play that Grayson Allen made has no place in basketball. He definitely did not go for the ball. He definitely did not go just to hard foul him. It was just a wild play, and obviously he’s known for that. He has a history of doing that in college as well and throughout his whole career.

“It’s very disappointing. Those plays like that have no place in basketball.”

Caruso is scheduled to have wrist surgery Monday morning. He’ll be re-evaluated six to eight weeks after the surgery.

Allen was suspended one game by the NBA for the incident. Vucevic thought it should’ve been longer.

“The injury, how much it impacts us, obviously the way we look at it is it should be punishable more than just one game," he said. "But nothing that they punish him – unless they punish him for the same amount (of time) that AC is out – it doesn’t do anything. We lose a player for two or three months possibly. He loses, he missed one game. You can’t compare it unless he’d get suspended for three months, which he obviously is not. Anything that they do doesn’t matter.”

Caruso has been the heart and soul of the Bulls’ defense, and Vucevic praised his toughness. Caruso played to the end of the game Friday after suffering the injury.

Cody Westerlund is a sports editor for 670TheScore.com and covers the Bulls. Follow him on Twitter @CodyWesterlund .

Bulls to play Pistons in Paris on Jan. 19

The Bulls and Pistons will play each other next Jan. 19 in Paris, the NBA announced Tuesday. They’ll play the regular-season game at Accor Arena. It will mark the Bulls’ third game in Paris, as they played two preseason games there in 1997.
CHICAGO, IL・1 DAY AGO
670 The Score

The biggest question hovering over the Bulls’ offseason is whether star guard Zach LaVine will return to Chicago when he hits unrestricted free agency.
CHICAGO, IL・1 DAY AGO
670 The Score

Bears quarterback Justin Fields is showing more confidence ahead of his second NFL season, something that has inspired hope among his teammates and coaches.
CHICAGO, IL・1 DAY AGO

Teven Jenkins is healthy, rejuvenated and ready to prove his place with Bears

Second-year offensive tackle Teven Jenkins is healthy after his rookie season was derailed by back surgery, and he’s ready to prove his place with the Chicago Bears.
CHICAGO, IL・16 HOURS AGO