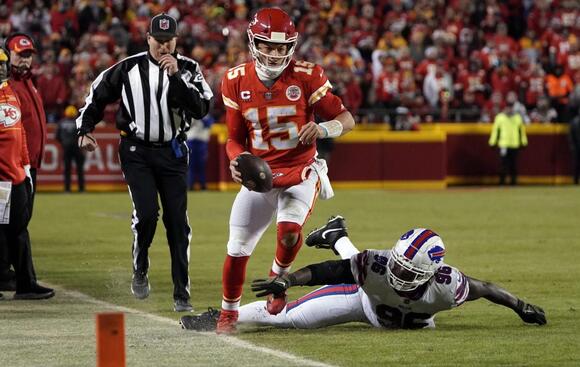 The Kansas City Chiefs and Buffalo Bills played a playoff game for the ages Sunday night at Arrowhead Stadium in Missouri.

With a trip to the AFC Championship Game against the Cincinnati Bengals on the line, Patrick Mahomes and Josh Allen went tit-for-tat in performances that defied logic.

Let’s just explain it this way. Those covering the game (self included) had multiple drafts written depicting a Chiefs or Bills win — all within the final two minutes of the game. Twenty-five points were scored during that span. Twenty-five!

It started with Allen hitting Gabriel Davis on a 27-yard touchdown with 1:54 remaining in the game. A two-point conversion gave Buffalo a 29-26 lead.

But like clockwork, Mahomes hit Tyreek Hill on a 64-yard touchdown just 41 seconds later to give the Chiefs a 33-29 lead and the likely win.

With just 13 seconds remaining in the game, Allen hit Davis for the wide receiver’s fourth touchdown of the game from 19 yards out to give the Bills a 36-33 win.

Apparently, that was more than enough for Mahomes and his Kansas City Chiefs. Dude led Kansas City down the field 44 yards on just three plays — culminating in a 44-yard game-tying field goal for kicker Harrison Butker as time expired in regulation.

Receiving the opening kickoff in overtime, Mahomes then led the Chiefs down the field 75 yards. Said drive culminated in an eight-yard touchdown pass from the quarterback to Pro Bowl tight end Travis Kelce.

We’re pretty much out of expletives to explain what happened outside of noting that the Chiefs came out on top by the score of 42-36 . So, we’ll leave it up to the masses.

The 2021 season is in the books and defensive play culminated in the Los Angeles Rams becoming Super Bowl champions.
NFL・9 HOURS AGO
Sportsnaut

Our MLB Games Today schedule is back for the 2022 MLB season. Major League Baseball ended its lockout, officially clearing
MLS・16 HOURS AGO
Sportsnaut

Even without Jimmy Butler (knee) in the mix for the second half, the Miami Heat were able to take out
MIAMI, FL・5 HOURS AGO

Former Tampa Bay Buccaneers tight end Calvin Magee, who was in his first year as an assistant coach at Jacksonville
TAMPA, FL・1 DAY AGO
Sportsnaut