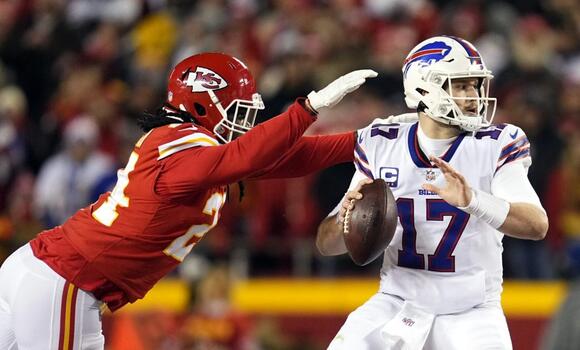 Josh Allen and the Bufalo Bills found themselves down 23-14 late in the third quarter of Sunday’s AFC Divisional Playoff Game against the Kansas City Chiefs.

In a shocking manner, the Bills responded on their very next offensive play. That included Allen hitting wide receiver Gabriel Davis on a 75-yard touchdown to pull the Bills within two . The pass was an absolute rocket.

There’s very few quarterbacks in the NFL that can make that type of throw. We’re talking 58 yards in the air and right into the hands of Davis for the big time score.

It must be noted that star Chiefs safety Tyrann Mathieu was ruled out early in the game with a concussion. We’re not saying Honey Badger would have stopped this. But it was a disastrous read and angle from fellow safety Juan Thornhill at a time when the Chiefs were looking to take complete control of the game.

As for Josh Allen , he started the game completing 17-of-20 passes for 195 yards with two touchdowns and zero interceptions through three quarters.

The winner of this game will take on the Cincinnati Bengals in the AFC Championship Game with a trip to the Super Bowl on the line.

May 20 (Reuters) - Michael Vick, the once-dynamic NFL quarterback whose involvement in a dogfighting ring halted a breathtaking career in its prime, has agreed to come out of retirement to join startup league Fan Controlled Football, a source told Reuters on Friday. Vick, a former first overall draft pick...
NFL・13 HOURS AGO
Sportsnaut

An eventual Marquise Brown contract extension will likely be very expensive for the Arizona Cardinals. However, after trading a first-round
GLENDALE, AZ・13 HOURS AGO
Sportsnaut

The 2021 season is in the books and defensive play culminated in the Los Angeles Rams becoming Super Bowl champions.
NFL・1 DAY AGO
Sportsnaut

After June 1, the Las Vegas Raiders will have about $19.8 million in additional cap space because they designated linebacker
NFL・2 DAYS AGO

Washington Commanders quarterback Carson Wentz is excited for a fresh start with a new organization. While he is focused on
INDIANAPOLIS, IN・14 HOURS AGO
Sportsnaut

Following their surprise Super Bowl LVI appearance, one of the top defenders and team captain Jessie Bates was hit with
CINCINNATI, OH・1 DAY AGO
Sportsnaut

ESPN anchor Sage Steele is out of the hospital and back home after a poorly hit tee shot by Jon
TULSA, OK・9 HOURS AGO
Sportsnaut

Former Tampa Bay Buccaneers tight end Calvin Magee, who was in his first year as an assistant coach at Jacksonville
TAMPA, FL・1 HOUR AGO
Sportsnaut

The Dallas Cowboys are the current home of one of the most explosive and promising young defenders in the NFL.
ARLINGTON, TX・1 DAY AGO

Joe Burrow has set the standard for success across college football that has become synonymous to his namesake. Any time
BATON ROUGE, LA・13 HOURS AGO
Sportsnaut

Chances are, when compared to last year, everyone involved with the New York Jets are feeling 100x better about their
NFL・1 DAY AGO
Sportsnaut

While there is plenty of confidence in Drew Lock from head coach Pete Carroll, Geno Smith is emerging as the
SEATTLE, WA・16 HOURS AGO
Sportsnaut

At a time when salaries for the highest paid NFL players are skyrocketing, Baltimore Ravens quarterback Lamar Jackson is taking
BALTIMORE, MD・11 HOURS AGO
Sportsnaut

New England Patriots top pick Cole Strange actually thought he was being pranked when the team took him with the
FOXBOROUGH, MA・10 HOURS AGO
Sportsnaut

Despite entering the league as a third-round pick in the 2012 NFL Draft, T.Y. Hilton has racked up nearly 3,000
INDIANAPOLIS, IN・1 DAY AGO