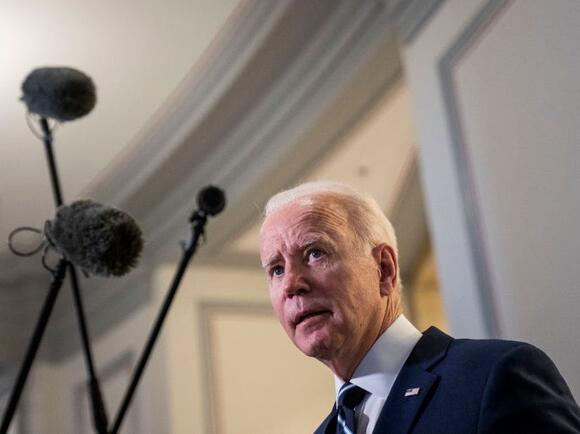 2021 began with promise for those hoping to demilitarize US engagement abroad. President Joe Biden's inaugural address promised "now was a time for boldness," not "to meet yesterday's challenges, but today's and tomorrow's."

And early months did tease an exciting break from the stale beltway playbook. A February speech pledged to "course-correct our foreign policy" with a " global posture review ," floating a fundamental rethink of where US forces were stationed and why.

In the same speech, Biden promised to end American support for the Saudi war in Yemen, including relevant arms sales. He also extended the New START nuclear disarmament treaty, another signal that refreshing change was in the air.

As late as this summer, Biden backed his rhetoric with action. The difficult decision to withdraw from Afghanistan bravely and rightly bucked relentless hawks who would have stayed another 20 years. To be sure, officials overestimated how long the Ghani government could stand alone, and failed to evacuate thousands of vulnerable Afghans, including some to whom we owe heavy debts.

A painless withdrawal may not have been possible — but a better withdrawal was, and the buck stops with Biden for not achieving it. Nevertheless, it beat the alternative of endless war, and left the United States better positioned to focus on core security interests.

Sadly, the ugly press of the Kabul fiasco also appears to have tempered Biden's bucking of the foreign policy establishment. The final third of the year saw the return of depressingly familiar trends, which only accelerated this holiday season.

First, the military responded to horrific ISIS attacks at Kabul airport with yet another ill-conceived drone strike. Per usual, it took a damning press investigation of the strike for the military to admit it had not killed enemies but instead a family of innocents.

The Pentagon's internal investigation waited until the story had left the news cycle and then quietly declared itself not guilty, announcing this December that no one would be held accountable.

US policy toward Afghanistan has been no less heartless since. The economic upheaval of Taliban takeover — combined with severe drought — has produced a famine that threatens to plunge half the country into extreme hunger.

After 20 years of bloody, fruitless meddling in Afghan affairs, the least we owe these people now is to not purposely intensify their suffering. Yet that is exactly what we've done by freezing Afghan foreign reserves and maintaining rigid sanctions on the de facto government. As a result, many more Afghans may die this winter than in 20 years of war combined.

This, too, clings to cruel and discredited mindsets of yesteryear. Reflexively sanctioning illiberal governments in naïve hope of regime change usually hurts the innocent instead.

Even if sanctions succeed in ousting the Taliban, it would only renew civil war between factions (including ISIS) no more progressive or humane. Until we get fully out of the way, all of this hardship will be partly our doing.

Autumn was almost as frustrating in the bigger picture. In November, the promised posture review was announced (though not published) with a whimper , prompting widespread criticism . It ultimately concluded that no major strategic changes are needed — which is alarming, given how catastrophic US overextension has been in recent decades.

Finally, instead of reining in Trump-era increases to defense spending, Biden requested that Congress give the Pentagon another raise — and then Congress gave it $24 billion more than he requested. The extra money will go in part to buy dozens more ships and planes than the military says it needs.

In the process, Congress also scrapped bipartisan plans to repeal the 2002 Iraq War AUMF. This would have been largely symbolic (the 2001 AUMF is much broader) but nonetheless an important first step to restraining executive war-making. Sadly, even this proved too much to ask.

It's bad enough to not demand accountability for 20 years of failure. It's bad enough to be so in-denial about these failures that we'd rather let millions starve than admit the Taliban now govern Afghanistan.

But to actually pat ourselves on the back, with a posture review suggesting all we need to do is stay the course? To throw even more money at the security iron triangle? To not withdraw from Syria or Iraq, nor dare question what's gained from whack-a-mole air wars in dozens of countries? Reporter Matthew Petti put it well: "the Biden administration is filled with people who can explain the severe dangers of the status quo perfectly but have no sense of urgency to fix it."

This status quo is nobody's vision for corrective US strategy. It is rather a political compromise in the tug of war between advocates of more, and advocates of less. Biden took laudable initial steps in the right direction but now appears to have gotten cold feet.

There's still time to right the ship — but with tensions rising over Ukraine, he may have to make a firm choice soon. The chance of war with Russia is higher entering 2022 than at any time in recent memory. If the president wants a foreign policy legacy that truly transforms, he should avoid it and trust his initial restraining instincts moving forward.

Andrew Doris is a non-resident fellow at Defense Priorities and an master's student at Yale's Jackson Institute for Global Affairs. Before coming to Yale, he served four years as a US Army officer, including two in South Korea. His article "Afghanistan Was Not Korea: Withdrawal Critics Understate the Costs of War" was recently published by the Yale Journal of International Affairs. He holds a bachelor's in political science from Johns Hopkins University.

Sound like our BU..LS..T press making excuses for Biden once again! The media are trying their damnest to run our country into the ground! I'm so sick of them making excuses for the DEMOCRATS and demonizing the REPUBLICANS! look around you people! Our country is a DIASTER and Bidens only solution is to travel around and talk to people! My guess is to remind people he's such a NICE GUY because apparently he doesn't believe any of the polls that clearly show he's in serious trouble!

Trust me he’s not the one making any decisions that goes on within the socialist democratic party. He’s just the figurehead that will be blamed for the worst administration in history

the decisions that he's made should have been hard. Those decisions have the US looking weak on the global stage and Russia is about to try him out. By removing sanctions and allowing Russia to sell energy via pipeline in Eastern Europe, gives Putin money to annex Ukraine to keep a buffer against Democracy being on his doorstep. Putin wants to gain back the countries lost in the cold war and with Biden being President, there's no better time for him to act.

Vladimir Putin's hand appears to tremble before he greets another man, which has sparked further concern over the Russian leader's health.
WORLD・27 DAYS AGO
Newsweek

With a key Senate primary still in the balance, Donald Trump is again casting doubt on election integrity without offering any evidence.
PENNSYLVANIA STATE・4 DAYS AGO
Newsweek

Maria Vorontsova allegedly took part in discussions on Telegram, according to an unconfirmed report by Dmitry Kolezev, editor-in-chief of the website Republic.
POLITICS・3 DAYS AGO

Greene testified on Friday that she didn't recall whether she asked Trump to invoke military rule, despite telling Meadows to relay the idea to Trump.
ATLANTA, GA・27 DAYS AGO
Business Insider

Putin has 2, maybe 3, daughters he barely ever talks about. One is reported to have a secret child with a German ballet star — here's everything we know about them

Russian president Vladimir Putin has tried to keep his personal life out of the spotlight, rarely if ever discussing his children.
CELEBRITIES・2 DAYS AGO
CNN

The Kremlin has refused to acknowledge its death toll in Ukraine, though a spokesperson admitted that Russia suffered "significant losses."
MILITARY・27 DAYS AGO

Harvard polled Americans under 30 who are likely to vote in the midterms and found 85% of them want some government action on student loan debt.
PRESIDENTIAL ELECTION・27 DAYS AGO
Business Insider

The former president referenced scoring well on a cognitive test in 2018, which is designed to detect whether a person has early stages of dementia.
DELAWARE COUNTY, OH・28 DAYS AGO
Salon

A plethora of downright bizarre scientific research from the Department of Defense previously kept under wraps has been uncovered, revealing an array of peculiar schemes proposed by the United States military. One outlandish proposal suggested detonating nuclear bombs on the moon to create a tunnel through it. Millions in taxpayer dollars were spent on the research, which appears to have relied on a contractor, Bigelow Aerospace Advanced Studies, which was owned by multi-millionaire Robert Bigelow, a hotel impresario. The public was kept in the dark until now regarding what research was being funded.
ASTRONOMY・26 DAYS AGO

When the US government seized $337,000 from Alexander Leszczynski, he produced "a fabricated pardon purportedly signed" by Trump, the Justice Department said.
FLORIDA STATE・1 DAY AGO
Business Insider

The former F-35 test pilot Billie Flynn told The Aviationist that moving to the "cosmic spaceship" that is the F-35 was too much to ask of MiG pilots.
AEROSPACE & DEFENSE・26 DAYS AGO
Business Insider

EXCLUSIVE: A group of Republican senators is introducing legislation to block the Biden administration from sending personnel and funding from the Department of Veterans Affairs (VA) to alleviate the crisis at the southern border. The senators are alarmed by the Biden administration's announced termination of Title 42 on May 23,...
CONGRESS & COURTS・26 DAYS AGO
Newsweek

The mother has questioned whether the soldiers would let her son live even if she did send the money.
MILITARY・27 DAYS AGO
The Independent

Vladimir Putin is so popular in Russia that he has the “political space” to withdraw his forces from Ukraine, said Boris Johnson.The prime minister said the Russian president still has “massive backing” from his own people despite international outrage over the invasion.“The Russian public overwhelming back Putin,” Mr Johnson told Talk TV. “Therefore he has the political margin for manoeuvre from within Russia … Putin has far more political space to back down, to withdraw.”The PM added: “There could come a point when he could say to the Russian people, ‘The military-technical operation that we launched in Ukraine has...
POLITICS・25 DAYS AGO
AOL Corp

Former President Donald Trump worked his Pennsylvania primary endorsements to make him look like a winner, but exasperated Republicans in the state say the end result could boomerang in ways that damage both the party and Trump's own chances should he run for president in 2024. “This is the most...
GEORGIA STATE・3 DAYS AGO