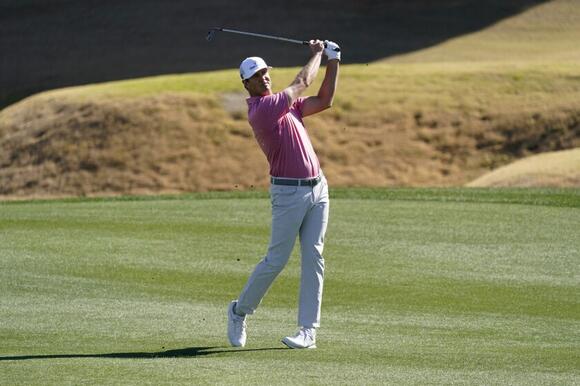 Hudson Swafford won The American Express for the second time in five years Sunday, breaking a late tie with an eagle and closing with an 8-under 64 for a two-shot victory.

Starting the final round on the PGA West Stadium Course, Swafford followed his eagle with a birdie on the par-3 17th to win by two over Tom Hoge.

Tied for the lead with Brian Harman and former British Open champion Francesco Molinari at 20 under, Swafford pulled ahead with a second shot to 8 feet for eagle on the par-5 16th. He then ran in a 20-foot birdie putt on the 17th, and closed with an 8-foot par.

Molinari, playing for the first time in two months, bogeyed the 18th for a 68 and finished four shots behind.

Swafford finished at 23-under 265 in the three-course event for his third PGA Tour title. He also won in the desert in 2017 and took the 2020 Corales Puntacana Resort & Club Championship in the Dominican Republic.

Hoge shot a 68. The 32-year-old from Fargo, North Dakota, missed a chance to win his first title in his 201st career start.

Lee Hodges, the 26-year-old from Alabama who shared the 54-hole lead with Paul Barjon, had a 70 and tied for third. Barjon shot 73 and finished 10th.

Patrick Cantlay, the FedEx Cup champion and 36-hole lead, was only 4 under on the weekend and finished ninth.

ORLANDO, Fla. (AP) — Danielle Kang wasted no time making sure she didn’t have another winless season. She capped off a strong weekend at Lake Nona by closing with a 4-under 68 for a three-shot victory in the Hilton Grand Vacations Tournament of Champions.

Kang ran off five birdies in a seven-hole stretch in the middle of ther round to post the low score of a blustery, cool Sunday in Florida.

She finished at 16-under 272, three shots clear of Brooke Henderson of Canada, who shot 70.

For all her birdies, Kang’s most important hole might have been a bogey on the 16th. She pulled her approach nearly into a penalty area and had to play away from the hole on a difficult bunker shot. She then two-putt from about 90 feet, converting a bogey putt from 10 feet.

Gaby Lopez had a 72 to finish third. Nelly Korda, the 54-hole leader and No. 1 player in women’s golf, closed with a 75 to tie for fourth.

ABU DHABI, United Arab Emirates (AP) — Thomas Pieters claimed the sixth and biggest European tour title of his career when he closed with an even-par 72 for a one-shot victory in the Abu Dhabi Championship.

Pieters had 16 pars in the final round, choosing not to go for the green on the par-5 18th when he realized he had a two-shot lead. He finished at 10-under 278, one ahead of Rafa Cabrera Bello (70) and Shubhankar Sharma (71).

Viktor Hovland, going for his third win in his last four starts, shot 72 and finished two shots behind along with Victor Dubuisson (69).

Scott Jamieson, who was bidding for a wire-to-wire victory after leading at the end of each of the first three rounds, fell out of contention with a 77 and tied for 10th.

Rory McIlroy moved to within two of the lead, courtesy of a141-yard eagle on the par-four ninth and a birdie on 13. He finished with three bogeys over the last five holes for a 69 to tie for 12th.

LA ROMANA, Dominican Republic (AP) — Aaron Jarvis of the Cayman Islands made birdie on the final hole Sunday for a 3-under 69 and a one-shot victory in a tense ending to the Latin America Amateur Championship.

The victory means Jarvis, a 19-year-old UNLV freshman, earns a spot in the Masters and the British Open at St. Andrews. He also is exempt into the final stage of U.S. Open qualifying.

He will be the first player from the Cayman Islands to compete at the Masters and British Open.

Jarvis was one shot behind when his second shot into the par-5 18th on the Teeth of the Dog course at Casa de Campo came up just short and took a big hop onto the green. He two-putted for birdie and posted at 7-under 281.

Fred Biondi, a Florida freshman from Brazil, had a one-shot lead until he hit a poor chip from sticky rough off the 17th and made bogey. His second shot into the 18th drifted to the right, and he pitched about 30 feet long and made par for a 72.

Santiago De La Fuente of Mexico (71) had a 35-foot eagle attempt on the 18th. He wound up three-putting for par when a birdie would have forced a playoff. Vicentie Marzilio of Argentina was two behind and had a 7-foot eagle put on the last hole. It caught the lip. He shot 71.

KA’UPULEHU-KONA, Hawaii (AP) — Miguel Angel Jimenez birdied the par-4 18th hole in regulation for a 6-under 66 and then beat Steven Alker with a par on the second playoff hole to win the season-opening Mitsubishi Electric Championship at Hualalai for the third time.

Alker also closed with a birdie for a 66 to join Jimenez at 17-under 199. Alker had a birdie putt on the first playoff for the win. He missed, and then failed to save par from a bunker on the second extra hole in a tournament that finished Saturday.

Sadom Kaewkanjana of Thailand closed with a 69 for a three-shot victory in the Singapore Open on the Asian Tour. He won by three shots over Joohyung Kim of South Korea, Yuto Katsuragawa of Japan, while Sihwan Kim finished fourth. All four players earned a spot in the British Open this summer. Jooyhung Kim wrapped up the Asian Tour Order of Merit. ... Anthony Quayle closed with a 1-over 73 and held on for a two-shot victory over Daniel Gale in the Queensland PGA Championship on the PGA Tour of Australasia.