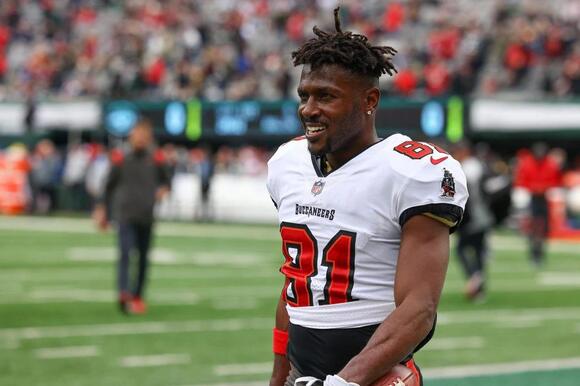 It was back in early January that the Tampa Bay Buccaneers waived star wide receiver Antonio Brown following a major spat between the enigmatic star and his coaches.

Brown was seen exiting the game during a Week 17 matchup with the New York Jets after getting into it with head coach Bruce Arians on the sidelines.

With his former Buccaneers team falling to the Los Angeles Rams in the NFC Divisional Playoffs on Sunday, Antonio Brown decided to take to social media to troll the team . It’s not a great look.

There’s really no need for this. And in reality, it’s not going to help Brown find a new team.

The embattled pass-catcher noted just recently that other teams have called him about potentially suiting up next season.

“I’m a football player, man. I’m a professional athlete. Let’s not get that twisted. That’s my main thing. A couple teams called.”

Antonio Brown on interest from other teams

Brown, 33, will undergo ankle surgery. He’s expected to be ready for the 2022 season. Whether teams have legitimate interest remains to be seen.

Anyone who takes on Antonio Bry is asking for nothing but trouble from this guy.

As a freshman at Clemson, Justyn Ross burst onto the scene with an incredible season paired with Trevor Lawrence, racking
KANSAS CITY, MO・17 HOURS AGO
Sportsnaut

Free-agent quarterback Colin Kaepernick has not suited up in an NFL game since New Year’s Day back in 2017. That
PARADISE, NV・20 HOURS AGO
Sportsnaut

Minnesota Vikings general manager Kwesi Adofo-Mensah has faith in his starting quarterback Kirk Cousins, but he also understands that the
MINNEAPOLIS, MN・1 HOUR AGO

The Miami Heat are attempting to take a 3-1 series lead on the road in Game 4 of their Eastern
BOSTON, MA・2 DAYS AGO
Sportsnaut

Brett Hundley signed with the Baltimore Ravens and joined the voluntary organized team activities, a portion of the offseason program
BALTIMORE, MD・3 HOURS AGO

Indianapolis Colts cornerback Kenny Moore is unhappy with his contract and not participating in OTA practices, the Indianapolis Star reported
INDIANAPOLIS, IN・23 HOURS AGO
Sportsnaut

It may have taken him a few years to get here, but Buffalo Bills safety Jordan Poyer is one of
BUFFALO, NY・22 HOURS AGO
Sportsnaut

The NFL will soon be exploring yet another revenue stream, as the league is set to launch its own streaming
NFL・16 HOURS AGO
Sportsnaut

The Las Vegas Raiders gave Colin Kaepernick an opportunity to find his way back into the NFL in the form
LAS VEGAS, NV・2 HOURS AGO

Before his first days of practice with the Miami Dolphins, Tyreek Hill did not expect to see high-level talent in
MIAMI, FL・1 DAY AGO
Sportsnaut

Former Ole Miss quarterback Matt Corral came off the board a bit later than expected in the 2022 NFL Draft,
CHARLOTTE, NC・3 HOURS AGO
Sportsnaut

Seattle Seahawks scouting exec Alonzo Highsmith will be moving to the opposite corner of the country, back to his home
SEATTLE, WA・2 HOURS AGO
Sportsnaut

The Arizona Cardinals and quarterback Kyler Murray have experienced a turbulent offseason with both sides using social media and news
GLENDALE, AZ・5 HOURS AGO
Sportsnaut

Cleveland Browns tight end David Njoku has been an enigmatic figure since they made the former Miami (F) star a
CLEVELAND, OH・1 DAY AGO