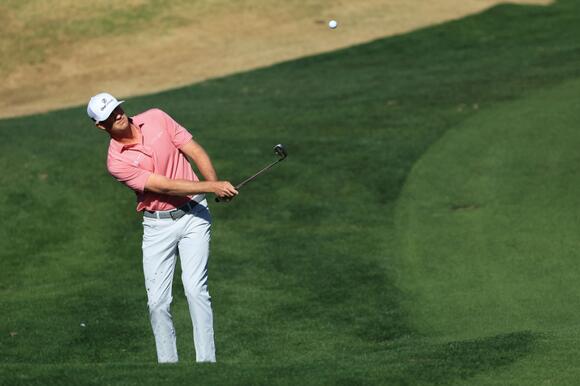 Hudson Swafford won the American Express for the second time in five years Sunday, breaking a late tie with an eagle in a closing-round eight-under-par 64.

Tied for the lead with fellow former Georgia player Brian Harman and Francesco Molinari at 20 under, Swafford pulled ahead with the eagle on the par-five 16th. From 198 yards, he hit to eight feet on the iconic hole with large, deep bunkers lining the left side.

Swafford then ran in a 20-foot birdie putt on 17, a par-three hole called Alcatraz with an island green ringed by jagged rocks. He saved par on the par-four 18th with an eight-footer to wrap up a spot in the Masters.

The 34-year-old finished at 23-under 265 in the three-course event for his third PGA Tour title. He also won in the desert in 2017 and took the 2020 Corales Puntacana Resort & Club Championship.

Fourth-ranked Patrick Cantaly, the second-round leader at 14 under, followed at 18 under after a 68. The FedEx Cup champion was trying to win for the third time in his last four starts.

Barjon, the Frenchman who played alongside close friend Hodges all four days, had a 73 to finish at 17 under. He also was making his 14th tour start.

Swafford had six birdies in an eight-hole stretch to take the lead with six holes left. He followed a three-putt bogey on the par-three 13th with a birdie on the par-four 14th for a two-stroke lead.

But he didn’t make it easy, dropping a stroke on the par-four 15th to fall into a tie with Harman, with Molinari soon joining them with a birdie on 16 in the group ahead of Swafford.

With the wind gusting in the morning, Swafford opened with a bogey. He got the stroke back with a birdie on the second and took the lead with the big birdie run while Hodges, Barjon and other leaders stalled.

Sparks end their five-game slump. Why they're optimistic for a bigger turnaround

The Sparks have lost five of six since opening the season 2-0. Where do they stand heading back on the road to play two teams with losing records?
LOS ANGELES, CA・22 HOURS AGO