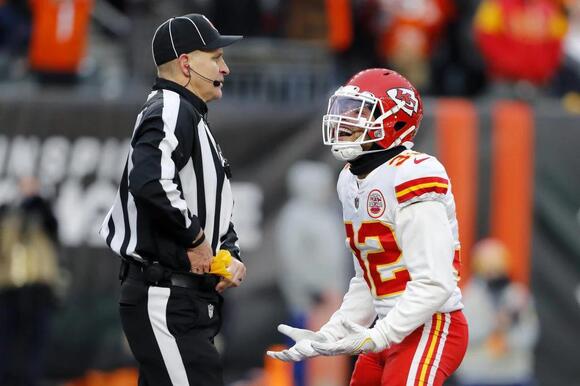 The Kansas City Chiefs have been relying on star safety Tyrann Mathieu to provide great coverage over the top with the two-time defending AFC champions struggling a tad at cornerback.

Unfortunately, defensive coordinator Steve Spagnuolo will have to scheme without Honey Badger for the remainder of Sunday’s AFC Divisional Playoff Game against the Buffalo Bills .

Mathieu was injured in the first half after being on the receiving end of some friendly fire on the part of teammate Jarran Reed.

As you will see below, Tyrann Mathieu was hit in the head on this play and was sent to get checked out for a concussion immediately.

A little later, Mathieu was ruled out for the remainder of the game with a concussion.

To say that this is bad news for the Chiefs would be an understatement. Kansas City yielded 27 touchdown passes against 15 interceptions during the regular season. It also gave up a 66% completion mark.

As for Mathieu, the three-time Pro Bowler recorded six passes defended and three interceptions during the regular season.

This injury comes amid a game in which the Chiefs and Bills were tied at seven. The winner of this game will host the Cincinnati Bengals in the AFC Championship Game for the right to take on either the San Francisco 49ers or Los Angeles Rams in the Super Bowl.

Colin Kaepernick is a step closer to getting back into the NFL. ESPN NFL insider Adam Schefter reported that Kaepernick is scheduled to have a work out with the Las Vegas Raiders on May 25. Kaepernick last played professional football in 2016, which was the same year that he began...
NFL・12 HOURS AGO
Sportsnaut

As a freshman at Clemson, Justyn Ross burst onto the scene with an incredible season paired with Trevor Lawrence, racking
KANSAS CITY, MO・8 HOURS AGO
Sportsnaut

Free-agent quarterback Colin Kaepernick has not suited up in an NFL game since New Year’s Day back in 2017. That
PARADISE, NV・11 HOURS AGO

Luka Doncic and the Dallas Mavericks are up against it in their Western Conference Finals series against the Golden State
DALLAS, TX・1 DAY AGO
Sportsnaut

The NFL will soon be exploring yet another revenue stream, as the league is set to launch its own streaming
NFL・6 HOURS AGO
Sportsnaut

Whether it’s merited or not, the knock on Lamar Jackson has always been his passing ability. It’s a major reason
HUNTINGTON BEACH, CA・2 DAYS AGO

Cleveland Browns tight end David Njoku has been an enigmatic figure since they made the former Miami (F) star a
CLEVELAND, OH・15 HOURS AGO
Sportsnaut

It may have taken him a few years to get here, but Buffalo Bills safety Jordan Poyer is one of
BUFFALO, NY・12 HOURS AGO
Sportsnaut

Indianapolis Colts cornerback Kenny Moore is unhappy with his contract and not participating in OTA practices, the Indianapolis Star reported
INDIANAPOLIS, IN・13 HOURS AGO
Sportsnaut

Joe Burrow has set the standard for success across college football that has become synonymous with his namesake. Any time
NFL・2 DAYS AGO