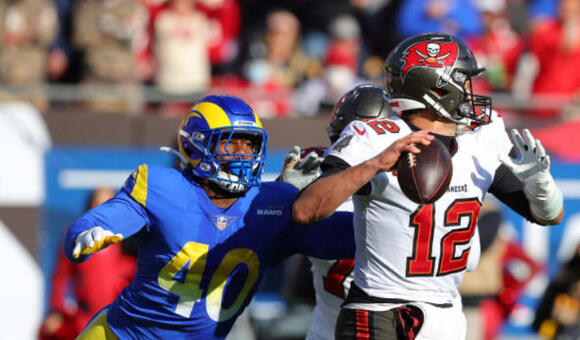 JAN 23 RAMS OUST BUCS We’ve been trained to believe that Tom Brady leading his team to clutch wins is inevitable. On Sunday in Tampa Bay, his Buccaneers almost did it again.

Instead, the Los Angeles Rams endured a late comeback to kick a field goal in the final second to secure a 30-27 win.

The defending Super Bowl champions played host to the Rams in the NFC divisional round on Sunday, looking to avenge a pair of losses to the one team they've played but yet to beat since Brady joined the Bucs in 2020.

That’s right: It’s actually these Rams - which just happened for a third time - beating the 44-year-old quarterback as a Buc that is seemingly inevitable.

The Rams are now a game away from the Super Bowl, with Cooper Kupp catching a deep ball from QB Matthew Stafford in the final minute to set up the upset win.”

Said Brady before the game of the Rams: “It’s a very talented football team, one of the great teams in the NFL. ... It's going to be a very, very difficult game for us.''

The Bucs are now 29-10, including 5-1 in the playoffs, since Brady's arrival - a brilliant mark, but for one day against Stafford (who just got the first two postseason wins of his 13-year career) not good enough.

Sean Payton is returning to the NFL (kind of). According to Mike Florio of Pro Football Talk, the former New Orleans Saints head coach has accepted a job with Fox. Payton will work in the studio as an NFL analyst throughout the 2022 season, and it's believed he will join the Fox NFL Sunday crew when Jimmy Johnson is off.
NFL・19 HOURS AGO
Falcon Report

The Falcons won with speed last season at receiver, but the addition of Bryan Edwards changes that notion?
ATLANTA, GA・22 HOURS AGO
Falcon Report

The Cincinnati product appears to have the talent and intangibles to be a franchise quarterback.
ATLANTA, GA・20 HOURS AGO

The Falcons have made a few moves in the wide receiver department lately.
ATLANTA, GA・23 HOURS AGO
The Spun

Alabama head coach Nick Saban may claim to want more parity in college football, but fans aren't buying it. During an appearance with Paul Finebaum at the Regions Tradition, Saban, who has won seven national championships as a head coach, curiously argued for a more balanced college football landscape. "One...
TUSCALOOSA, AL・2 DAYS AGO
Falcon Report

Sheffield will head back to his hometown of Houston via the waiver wire
HOUSTON, TX・5 HOURS AGO