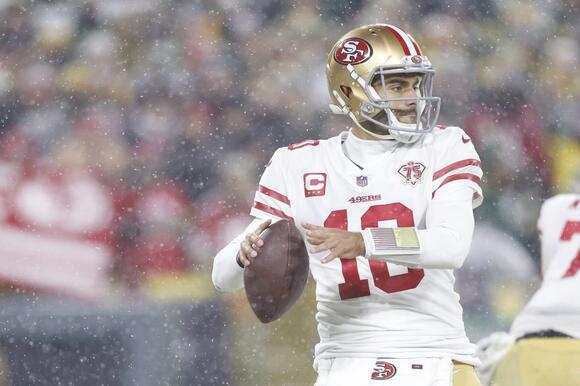 The San Francisco 49ers and Los Angeles Rams will do battle for a third time this season during Sunday’s NFC Championship Game at SoFi Stadium in Southern California.

San Francisco went into Green Bay and braved the Lambeau cold to upset Aaron Rodgers and the Green Bay Packers Saturday night. As for the Rams, they defeated Tom Brady and the defending champion Tampa Bay Buccaneers in epic fashion at Raymond James Stadium Sunday afternoon.

With a trip to Super Bowl LVI on the line at the very same SoFi Stadium, we provide you with four bold predictions for what promises to be an epic 49ers at Rams game.

Related: How to watch 49ers vs Rams AFC Championship Game

An argument could be made that Rodgers honed in on Davante Adams too much in the NFC Divisional Playoff Game. San Francisco was missing standout rookie cornerback Ambry Thomas, and the reigning NFL MVP figured he had a plus-level matchup. Unfortunately, the conditions were not indicative of throwing down the field. It led to major struggles on the part of Rodgers and the Packers’ offense.

Don’t expect the same thing to come to fruition Sunday afternoon. The indoor environment of SoFi Stadium should play a huge role in what promises to be a high-scoring affair. With San Francisco proving it can score on the Rams, Matthew Stafford will be forced to pass. That will lead to 15-plus targets for Kupp and a huge outing after he burnt the Buccaneers in the previous round.

Nick Bosa will get to Matthew Stafford for two sacks

Recovering from a concussion he suffered in the NFC Wild Card Playoffs against the Cowboys, Bosa was an absolute force against the Packers. The NFL Defensive Player of the Year candidate took advantage of a plus-level matchup against Packers backup left tackle Billy Turner. Bosa recorded two sacks, two quarterback hits and a forced fumble in the 49ers’ win.

As you can see, Bosa has been absolutely dominant. With Los Angeles portentially forced to rely on backup left tackle Joseph Noteboom in this one, it would not be a shock if Stafford faced the same music as Rodgers did last week. In two games against the Rams during the regular season, the former No. 2 pick recorded four quarterback hits and 1.5 sacks.

Related: Everything you need to know about the NFL season

After the sea of red we saw in Week 18, the Rams initially took measures to avoid a repeat of this in the NFC Championship Game. It’s apparently not working . This comes after Matthew Stafford’s wife put Rams fan on blast following the aforementioned game.

“I have never seen so many of the opposing team’s fans at a game. We came from Detroit. There were a lot of good traveling teams there, but that was wild,” Kelly Stafford said . “Matthew was on a silent count, Jimmy Garoppolo was not. It was crazy. It made it very hard for us, because I guess we weren’t expecting to be going silent count.”

The Rams might do what they can to avoid a 49er take over in Southern California. But the team can’t control the second-hand market. 49ers fans travel well. Northern California is a mere hour plane drive away. The expectation here is that we’ll see roughly 60-70% 49ers fans at the NFC Championship Game.

The story is by now well known. Garoppolo is not the primary reason San Francisco has won a lot under his watch. He’s the Achilles’ heel on offense. We’ve read this narrative over and over again. It makes sense to a point.

Those are some horrible numbers. With that said, Jimmy GQ also finds a way to win. He’s 4-1 in his playoff career and 37-15 overall as a starter. On the road this season, Garoppolo has led the 49ers to an 8-2 record. He’s going to be ready in this one.

As for Stafford, he’s 1-5 in his career against the 49ers. That includes a 0-2 mark during his first regular season with the Rams. Stafford was also hit 13 times and sacked a total of five times in San Francisco’s Week 18 comeback win over Los Angeles. With Garoppolo boasting a 6-0 career record against the Rams, look for him to lead the 49ers to a second Super Bowl appearance in three seasons.

As noted above, Garoppolo has a perfect record in his career against the Rams. He’s also 4-1 in the playoffs and has won 37 of his 52 career starts. With 49ers fans expected to be at SoFi Stadium in a large scale, this also won’t be a natural home-field advantage for the Rams.

While the game promises to be incredibly close, we’re predicting that the 49ers’ defense under highly respective coordinator DeMeco Ryans does just enough to hold off Stafford and Co., leading San Francisco to a narrow “road” victory.

I don't care who wins this game, all I know is it's extremely hard for a team to beat another team 3 times in the same season. Ask New Orleans how that worked out for them last season against Tampa Bay in the playoffs. I'm just glad that the Cowboys, Titans or New England aren't playing for the Super Bowl.

Seven-time Pro Bowl center Alex Mack still has not made it clear to the San Francisco 49ers if he plans
SAN FRANCISCO, CA・4 HOURS AGO
Sportsnaut

Quarterback Matthew Stafford is still not throwing and defensive tackle Aaron Donald was a no-show due to his contract situation
CINCINNATI, OH・20 HOURS AGO
Sportsnaut

The Indianapolis Colts signed free agent running back Ty’Son Williams on Tuesday, two weeks after the Baltimore Ravens withdrew their
INDIANAPOLIS, IN・2 HOURS AGO
Sportsnaut

All seems to be quiet on the Jimmy Garoppolo trade front as the San Fracisco 49ers quarterback mends from off-season
SAN FRANCISCO, CA・22 HOURS AGO
Sportsnaut

Sacking the quarterback rarely comes easily in the NFL (unless you’re one away from a record). For Chicago Bears pass
CHICAGO, IL・2 DAYS AGO
Sportsnaut

The NFL scouting combine will remain in Indianapolis through at least 2024. The NFL made the announcement on Tuesday during
INDIANAPOLIS, IN・3 HOURS AGO
Sportsnaut