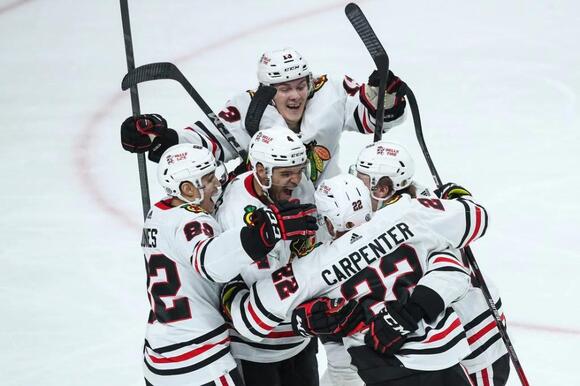 The Colorado Avalanche are rolling, winning six straight and 15 in a row at home, but it hasn’t been a dominating stretch.

In Colorado’s last three home wins, two have gone to a shootout and the most recent was an overtime win over Montreal, 3-2, on Saturday night. The Canadiens came into Saturday with just eight wins on the season and nearly stole one until Gabriel Landeskog scored in overtime.

“It is a strength to be able to find a way to win those hockey games no matter where you are in the standings and where the other team is in in the standings,” Landeskog said. “There are no easy games.”

The Avalanche have what appears to be a winnable game and a chance to extend their home winning streak to 16 when they host the Chicago Blackhawks on Monday night.

It will be Colorado’s seventh game in the last 11 days, with three of those going beyond regulation. The heavy workload may be impacting the team, coach Jared Bednar said.

“Over the last little bit we’ve played a lot of hockey and fatigue is a little bit of a factor,” he said after Saturday’s game.

The Avalanche have been outplayed in stretches over the last week, and the goaltending has rescued them a couple of times. Pavel Francouz and Darcy Kuemper were the best players in games at Anaheim and Los Angeles, respectively, and Kuemper came up big again against the Canadiens.

“If we don’t get the goalie performances we did the last three games then we don’t win all three,” Bednar said. “We might come up with one. Two might be a reach.”

Monday will be the third of four meetings between the Central Division rivals and the second one in three weeks. Colorado won at home in October and then rallied to win in overtime in Chicago on Jan. 4.

The Blackhawks are coming off back-to-back losses against Minnesota, the second of which they lost in overtime after giving away a lead on Saturday night. Saturday’s loss was a tough blow for a team trying to stay in the postseason hunt.

“We’re pretty well aware where we are in the standings,” Jonathan Toews said Friday. “Every game has been pretty tough this year and I think it’s only going to get harder. We’ve got to keep raising our game.”

Chicago is dealing with some injuries — defenseman Seth Jones is on injured reserve — and the possibility some players could be on the move before the trade deadline. One of the bigger names rumored to be available is goaltender Marc-Andre Fleury, who is in his first season with the Blackhawks.

Fleury, who won the Vezina Trophy last season with Vegas, is focusing on Chicago and not any speculation.

After OT win, Blues look to hold off Avalanche, elimination

After failing to dispatch the St. Louis Blues at home in Game 5, the Colorado Avalanche will try to clinch
DENVER, CO・4 HOURS AGO
Sportsnaut

Bookmark. Save. Favorite. Do your thing. This is the one-stop-shop for everything NBA schedule-related heading into the 2021-22 season: Related:
NBA・11 HOURS AGO
Sportsnaut

A pair of promising young pitchers square off as the visiting Chicago Cubs and Cincinnati Reds conclude their series on
CHICAGO, IL・16 HOURS AGO

Two notable hitting streaks and a winning streak will be on the line Tuesday night when the St. Louis Cardinals
SAINT LOUIS, MO・2 DAYS AGO
Sportsnaut

Veteran forward Otto Porter Jr., who has played significant minutes as the Golden State Warriors have built a 3-0 lead
NBA・2 DAYS AGO
Sportsnaut

The Oakland Athletics are coming off their first series win in two weeks as they return to the East Bay
OAKLAND, CA・11 HOURS AGO
Sportsnaut

NBA expansion could be coming to Seattle and Vegas after 2024

Ever since the NBA transformed the Seattle SuperSonics into the Oklahoma City Thunder back in 2008, there’s been a desire
SEATTLE, WA・19 HOURS AGO
Sportsnaut

The Colorado Rockies hope opening a four-game series against the host Washington Nationals on Thursday is just what they need
DENVER, CO・15 HOURS AGO
Sportsnaut

Celtics out to put finishing touch on Heat, series

The Eastern Conference finals haven’t been the most picturesque series, but it will look like a masterpiece to the Boston
BOSTON, MA・3 HOURS AGO

Tarik Skubal ready to go for Tigers against Guardians

Tarik Skubal was the last man standing from the Detroit Tigers’ season-opening rotation. Then in his latest start, he could
CLEVELAND, OH・15 HOURS AGO
Sportsnaut

Toronto Raptors center Khem Birch is expected to be ready for training camp in September after undergoing knee surgery. The
LOS ANGELES, CA・5 HOURS AGO
Sportsnaut

The suddenly slugging Chicago Cubs will look to continue their power surge against the host Cincinnati Reds on Wednesday as
CINCINNATI, OH・1 DAY AGO

Dylan Bundy hopes to pitch Twins to sweep of Tigers

The Minnesota Twins will shoot for their seventh victory in a row as they look to finish off a three-game
MINNEAPOLIS, MN・1 DAY AGO
Sportsnaut

Zone may hold key for Mavericks, Warriors in Game 5