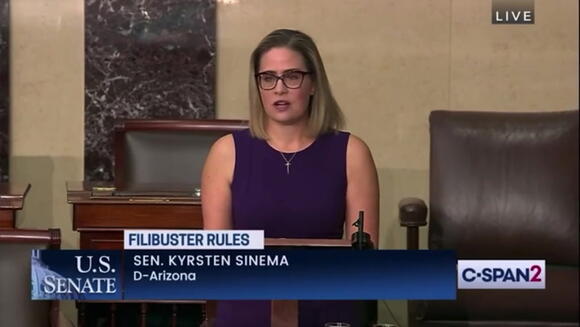 Sen Bernie Sanders appeared eager to escalate the war between various factions of the Democratic Party on Sunday during an interview with CNN in which he stated his support for the censure and potential primarying of a senator who voted against the party’s effort to change the filibuster and pass voting rights legislation.

Mr Sanders appeared on CNN’s State of the Union and said that the Arizona Democratic Party was “exactly right” to censure their state senator after Ms Sinema voted with Republicans last week against the Democrats’ voting rights push.

“On that particular vote that she and [Sen Joe] Manchin cast, we were trying to address the reality that you got 19 Republicans states all over this country who are undermining the foundations of American democracy. Trying to make it harder for people of color, young people, people with disabilities to vote," said Mr Sanders on Sunday.

He then took the gloves off when asked if he could be persuaded to campaign against sitting senators in the Democratic Party; technically, Mr Sanders is an independent, but he caucuses with the Democrats and has emerged as a far more reliable supporter of President Joe Biden’s agenda than either Ms Sinema or Mr Manchin. Mr Sanders replied that he would be “happy” to do so, given the right primary challenger.

“[I]f there were strong candidates in those states who were prepared to stand up for working families, who understand that the Democratic Party has got to be the party of working people, taking on big money interests. If those candidates were there in Arizona, in West Virginia, yes, I would be happy to support them,” said the Vermont senator. 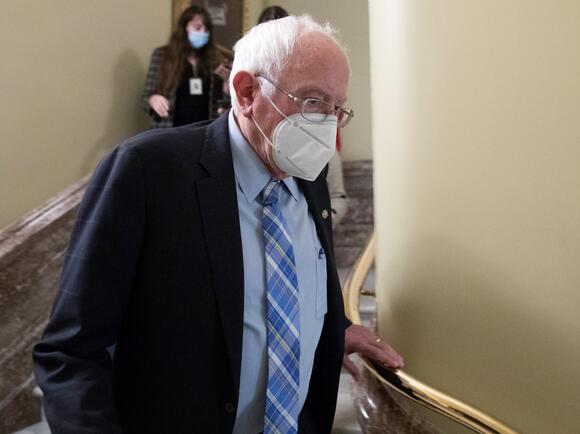 The Arizona Democratic Party said of Ms Sinema: “While we take no pleasure in this announcement, the ADP Executive Board has decided to formally censure Senator Sinema as a result of her failure to do whatever it takes to ensure the health of our democracy.”

Mr Sanders’ remarks are some of the strongest yet from Democrats supportive of Mr Biden’s push to pass voting rights legislation, which many activists argue is crucial to pass before the midterms given the ongoing efforts by former President Donald Trump and Trump loyalists in the GOP to install politicians who would not stand in the way of Mr Trump’s efforts to overturn an election defeat as some state-level GOP officials did in 2020.

Mr Sanders taking such a position is not wholly surprising, given his position as the most left-leaning member of the Senate and a frequent challenger of conservative members of the Democratic Party, and was the runner-up in the party’s past two presidential primaries where he cultivated a massive following of progressive and left-wing fans.

The Democrats’ bill, known as the Freedom To Vote: John Lewis Act, would impose further restrictions on the act of gerrymandering as well as restrict dark money in campaigns and establish national standards for early voting, mail-in ballots, as well as in-person voting on election day. The bill is a response to a wide range of issues including GOP efforts at the state level around the US to restrict mail-in and early voting as well as other legislation seen as aimed at making it harder to vote in general like a law passed in Georgia which made it illegal to offer food or water to those in line to vote.

put Bernie on the presidential ticket so he can see just how much he is hated now that we see who and what he really is.

Greene testified on Friday that she didn't recall whether she asked Trump to invoke military rule, despite telling Meadows to relay the idea to Trump.
ATLANTA, GA・28 DAYS AGO
AOL Corp

Former President Donald Trump worked his Pennsylvania primary endorsements to make him look like a winner, but exasperated Republicans in the state say the end result could boomerang in ways that damage both the party and Trump's own chances should he run for president in 2024. “This is the most...
GEORGIA STATE・4 DAYS AGO
Salon

Fox News host Lisa Kennedy said on Monday that U.S. lawmakers "should not have the government involved in education at all," suggesting that America should rid itself of the public school system entirely. Kennedy's remarks came during Monday's segment of "Outnumbered" in which Kennedy was facilitating a discussion around the...
CONGRESS & COURTS・27 DAYS AGO

The former president referenced scoring well on a cognitive test in 2018, which is designed to detect whether a person has early stages of dementia.
DELAWARE COUNTY, OH・29 DAYS AGO
Fox News

EXCLUSIVE: A group of Republican senators is introducing legislation to block the Biden administration from sending personnel and funding from the Department of Veterans Affairs (VA) to alleviate the crisis at the southern border. The senators are alarmed by the Biden administration's announced termination of Title 42 on May 23,...
CONGRESS & COURTS・27 DAYS AGO
The Independent

Florida Republicans have compared a protest against a newly drawn congressional map that dilutes Black voter strength in the state to the violent attempt to overturn the results of the 2020 presidential election on 6 January, 2021.On 21 April, a small group of mostly Black Democratic legislators staged a sit-in protest in the middle of the House floor, singing and praying and briefly delaying votes during a special legislation convened by Republican Governor Ron DeSantis, whose map eliminates two of the state’s four districts represented by Black Democrats and creates four more districts that lean Republican.State Rep Randy Fine...
PROTESTS・28 DAYS AGO
CNN

Harvard polled Americans under 30 who are likely to vote in the midterms and found 85% of them want some government action on student loan debt.
PRESIDENTIAL ELECTION・28 DAYS AGO
Business Insider

Rep. Marjorie Taylor Greene (R-GA) speaks to supporters of former U.S. President Donald Trump at the Banks County Dragway on March 26, 2022 in Commerce, Georgia. This event is a part of Trump's Save America Tour around the United States. (Megan Varner/Getty Images) On Monday, CNN's Andrew Kaczynski and Em...
COMMERCE, GA・27 DAYS AGO
Salon

House Republican Leader Kevin McCarthy (R-CA) (Joe Raedle/Getty Images) There was a flurry of headlines last week when news broke that House Minority Leader Kevin McCarthy (R-CA) said out loud that he thought former President Donald Trump should resign in the wake of the deadly Jan. 6 insurrection. The focus was on the fact that McCarthy lied about ever expressing that thought - until, of course, he was confronted with the audio recording of him saying exactly that.
CONGRESS & COURTS・27 DAYS AGO

Individual judges may not like the policy choices of the Biden administration, but it is not their job to weigh in on that policy debate.
TEXAS STATE・28 DAYS AGO
CNN

Thomas Webster’s trial kicked off with dueling videos from the Capitol and competing theories of what they showed.
LAW ENFORCEMENT・27 DAYS AGO
The Independent

On Tuesday evening I was asked, firmly but politely, by the Hendersonville police department to leave the premises of a small auto detailer and tire shop.But this was no ordinary auto detailer and tire shop: It was the home of the final (?) flameout of freshman Rep. Madison Cawthorn, who had just lost his primary in a stunning night, that didn’t even extend — as some analysts might have expected — to a June runoff election. Thanks to a resounding showing by Cawthorn’s main rival, state Sen. Chuck Edwards, it was all over for Cawthorn. It wasn’t explicitly mentioned, but...
HENDERSONVILLE, NC・2 DAYS AGO

The attorney general of Washington DC is suing Mark Zuckerberg over his role in the Cambridge Analytica scandal.Attorney General Karl Racine filed the lawsuit on Monday. In a statement, the attorney general said Mr Zuckerberg himself took part in the decisions that allowed Cambridge Analytica, a now-defunct political consulting firm, to access the private data of millions of Facebook users.“The evidence shows Mr Zuckerberg was personally involved in Facebook’s failure to protect the privacy and data of its users leading directly to the Cambridge Analytica incident,” Mr Racine said. “This unprecedented security breach exposed tens of millions of Americans’...
LAW・4 HOURS AGO