Bitterly cold temperatures are on the way for the rest of the weekend after a nor'easter slammed New York City.

SUNDAY: Very cold and mostly sunny, highs in the mid-20’s, winds northwest to west from 10 to 15 mph, gust to 25 mph. Wind chills from the low to mid-teens. 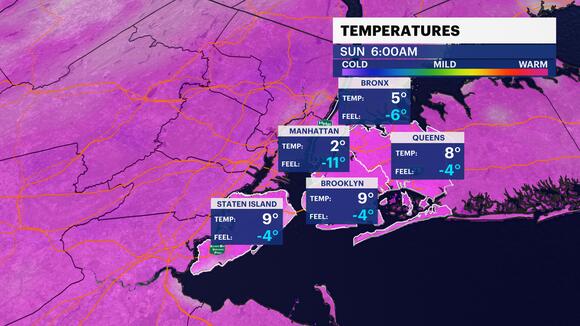 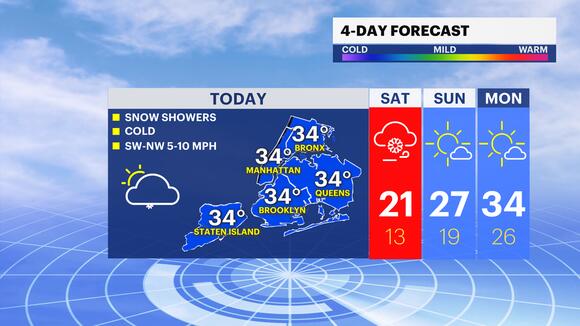 TUESDAY: Partly sunny, highs in the mid-30’s, winds northeast to east from 5 to 10 mph.

WEDNESDAY: Mostly cloudy with a chance of showers, highs from the low to mid-40’s, winds west to south from 5 to 10 mph.

THURSDAY (WEATHER TO WATCH): Clouds and rain, highs from the mid-40’s to the low 50’s, winds south from 10 to 15 mph. The combination of warmer temperatures and rain will trigger snow and ice melt! Watch for flooding!

FRIDAY: Mostly cloudy with a slight chance of mix/snow in the morning. Highs near 35, lows only around 20.

HEAT ALERT: Heat advisory in effect for NYC with temperatures expected to rise into the 90s

A heat advisory was issued in the Bronx and Brooklyn from noon to 8 p.m. Saturday as high temperatures and humidity could cause heat-related illnesses to occur.
NEW YORK CITY, NY・5 HOURS AGO
News 12

If you plan on taking advantage of the summer-like weekend, it's important to remember to protect yourself when you're out in dangerous heat. This is going to really be a shock to the system because normally by the time we start experiencing 90 degree heat, we've gotten into the mid- and upper-80s so we get acclimated.
HUDSON, NY・16 HOURS AGO
News 12

The temperature will skyrocket close to 90 degrees this weekend, and so officials statewide are cautioning against excessive sun exposure and freezing water conditions at the beach. Officials say anyone heading out to the beach needs to prepare because of how strong the sun will be. They are cautioning anyone...
NORWALK, CT・8 HOURS AGO

WEATHER ALERT: A severe thunderstorm warning is in effect for parts of Ocean County until 6:45 p.m. The National Weather Service has issued a tornado watch for parts of New Jersey until 7 p.m. The tornado watch was issued for Burlington, Camden, Middlesex, Monmouth and Ocean counties. News 12 Storm...
OCEAN COUNTY, NJ・16 HOURS AGO
News 12

Beachside businesses could be in store for a big weekend as summer-like temperatures are expected this weekend. Brian Braddish, who owns Riptides, is hoping the rainy weekends and empty boardwalk in Long Beach will soon be changing. "I think everyone's looking forward to coming out to the Long Beach boardwalk...
LONG BEACH, NY・5 HOURS AGO
News 12

DENVER - Kris Bryant's return from a back injury will have to wait. It's hard to play baseball during a snowstorm in Colorado. The opener of the Rockies' three-game series against the New York Mets was postponed Friday, 6 1/2 hours before the scheduled first pitch, with a winter storm warning in effect for the Denver area. The forecast calls for 3 to 5 inches of snow at Coors Field.
DENVER, NY・14 HOURS AGO
News 12

The Belmar Seafood Festival has returned following a two-year hiatus due to the COVID-19 pandemic.
BELMAR, NJ・10 HOURS AGO

Gas prices are showing no signs of slowing down.
PLAINVIEW, NY・5 HOURS AGO
News 12

A Mattituck winery doubles as a bed and breakfast. Rose Hill Vinyards has a wine library with a spacious bar, a rustic gift shop to buy their wines or other items. Visitors can also spend the night at the farmhouse from 1880 in front of the property, which has four bedrooms.
MATTITUCK, NY・6 HOURS AGO
News 12

High oil prices could be affecting the number of potholes Long Islanders are feeling on the roads.
BROOKHAVEN, NY・10 HOURS AGO
News 12

Huntington officials responded to a call for an overturned vehicle in Huntington Harbor off West Shore Road by a manager at the Huntington Yacht Club. During the slick road conditions at 9:40 a.m. Thursday, the vehicle spun out, flipped over, rolling twice and landing on all four tires in an upright position on the sand, according to officials.
HUNTINGTON, NY・22 HOURS AGO

Frustrations boil over from water problems in West Nyack

Some residents in West Nyack are boiling mad over days of water problems in the community. A major pipeline burst Wednesday morning, leaving many without water for days. Many of those affected are still under a boil water advisory. Some have taken to posting signs of frustration saying they feel...
WEST NYACK, NY・12 HOURS AGO
News 12

A passing truck tore down power lines and started a transformer fire in New City this morning. Clarkstown police say the truck was traveling in the area of American Legion Way when it hit the lines at the intersections of Route 304, Congers Road and Third Street. Over a dozen...
NEW CITY, NY・2 DAYS AGO
News 12

A missing 20-year-old from Poughkeepsie with special needs has been found dead, according to a Facebook post by his mother. Alicia McIver posted: “It is with the greatest sadness that I inform you all that the perfect, precious soul that was my son Jordan ‘Jay’ Jones was found deceased. I was informed last night by the city of Poughkeepsie PD. At this time, I'd like to thank you all for your help and prayers, and ask that you give me time. I will announce funeral arrangements as soon as they become finalized. Please pray for the strength for me and my family during this time.”
POUGHKEEPSIE, NY・16 HOURS AGO
News 12

'I never thought I'd run again': Heart disease patient to run in Brooklyn Half Marathon

Runners across New York City will race in the Brooklyn Half Marathon Saturday, and one runner from the Bronx has a special purpose this year and an even more special running partner. Bronx runner Verissimo Costa thought he was the epitome of health until one day his heart stopped during...
BRONX, NY・16 HOURS AGO
News 12

Selling and buying items on social media might be easy but it can also dangerous. Police are issuing a warning about selling items on platforms like Facebook Marketplace after a deadly transaction in the Bronx and a carjacking at gunpoint this week in the Town of Newburgh. "It's always risky...
NEWBURGH, NY・1 DAY AGO
News 12

Police in Toms River say an 18-year-old man was killed and his teenage sister was injured when they became trapped in sand that collapsed while they were digging a hole at a Toms River beach. Authorities say that the teens are from Maine and were visiting the Jersey Shore with...
TOMS RIVER, NJ・2 DAYS AGO
News 12

A popular Monroe brewery and brewing supply store is closing after 32 years in business. The owners say their lease was ending and they couldn't find the right space, leading them to the decision to retire. Mark and Tess Szamatulski sold brewing and winemaking supplies, and even published two books...
MONROE, NY・1 DAY AGO